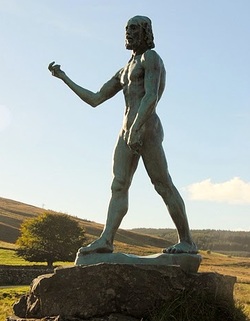 The people next door and up the street couldn’t really understand what had happened to little Johnny. They knew his parents and his family well. They were decent, reliable people. The kind of people anyone would
like to have as neighbours: kindly and helpful but never overbearing. His father had even been a kind of minister in the local chapel. Steady, ordinary people – so what’s gone wrong with Johnny?

He left home after his parents died. No one heard from him for years. The, all of a sudden, strange stories of him began doing the rounds. He had joined, or was it he had started? – some kind of commune out in the wilderness – living off the land, as it were. You hear of these things now
and again, don’t you? You know, lots of bead making, sitting around in tents, and letting hair grow all ways. Probably drugs, booze or magic mushrooms as well. It was clear in what people said Johnny wouldn’t tolerate any of that; but then he wouldn’t tolerate civilised society either!

People said he seemed angry, always angry. When he was asked quite proper questions about who he was and what he was about, his answers
had an air of impatience and criticism about them. Always, ‘No I’m not,’ or ‘No, I won’t.’ But then other times he’d talk about being ‘unworthy’ and how he was nothing, just a pointer to someone or something elsewhere. He certainly looked as if he thought himself nothing, so they said. Rags for clothes – and a wild
unkemptness about him that scared lots of people – those lots of others came to hear what he had to say.

You see, wild, strange Johnny had turned preacher out there in the wilderness, though nothing like his father. Wild in look, wild in behaviour, and wild in words too! He told people they were a bunch of sinners, and he didn’t hesitate to name what he thought was wrong. He ladled it on so that people squirmed when they listened. His idea of God was a fire ready to consume the earth. Change in everything was what he demanded. Everyone makes compromises. You always look to see how things might be turned a bit to your advantage, or that advantage of your family, don’t you? It’s natural. But Johnny
would have none of that – absolute honesty, complete sharing, and never any cheating. Never?

So there he is. The fires of justice burning in his eyes and in his words. Weird if you ask me. I won’t be going out into the wilderness to hear him. There are too many of these extremists about. They make your head hurt with their insistence. They flatten you with their words. All that stuff about the evils of capitalism – as if living in a tent on the pavement and
shouting about it is going to make any difference? There are just too many shouters with only one track to play. So self righteous. Their conviction gets  you down – on and on and on about one thing – this is wrong, that is wrong.  Militants they get to you. What has happened to Johnny?
-----
Was there gossip like that in the country districts and the little towns of Palestine all those years ago? Maybe. What every was said about John when he first came to public attention, something in his militancy touched a sore spot and as vexing and strange as he seemed people some came to think that there was something of the prophet about him.

In a world of dire poverty where many died before their time simply worn out by the system that kept too many people at the margins, John’s fierceness met a response. Who shouldn’t be angry at that? Domination by a foreign power and too many wealthy people in cahoots with that power – absentee landlords, high rents, exploitation of labour and lives that crippled, and taxed to the hilt to keep the whole oppressive system working. Who shouldn’t be angry at that?

Things need straightening out. Let the prophet shout the fact loud and clear. The king and his henchmen will hate it, the Romans will hate, but it says what the common people long to hear: that the words of the ancient prophet aren’t the dead letters of another age, they apply to them: good news to the oppressed, gladness instead of mourning, the raising up of that devastated, the promise of liberty. The Spirit of God seen in the work of the prophet of long ago is rekindled in the work of John –and is about to be rekindled in way even brighter. ‘I am neither the prophet, Elijah reborn, nor the Messiah, says John. And the Gospel writer underlines the character of John’s ministry: ‘He came as a witness to testify to the light.’

Here is part of John’s impatience with the enquiries about who he was and what he was about. ‘I am not the Messiah,’ I am  not the prophet, ‘I am the voice.’ John’s crucial ministry is what he said – what he said of the one who came after him: listen to me when I speak to you of Christ.

It may come as shock to think of ‘wild Johnny’ as our exemplar, but he is. We’re not called to a diet of locusts and wild honey (though Heston Blumenthal might persuade us to try it). But we are called to give voice to Jesus as the Christ. John, Luke tells us, raised people’s hopes, and we in our day must do the same – hope to motivate in an age of gloom and
cynicism. Hope grounded not in any particular quality or insight we own ourselves, but because of what we know of Christ; what we are able to point to. We preach not ourselves, but Christ. Like John, we must speak and act in ways that startle, challenge and inspire others to look to Christ.

Richard and his wife Claire worked at the local university. They lived next door to another couple who, by chance, also worked at the university. These neighbours were avowed atheists – eager to speak on any platform they could about the folly of belief in God. Richard and Claire were widely known as leading lights in the university church. The two couples were good neighbours to each other, and somehow an unspoken rule was established that faith was never a topic of discussion between them. The years passed, and then to the joy of friends, colleagues and family the neighbours’ first child was born. Some weeks later the proud parents and their newborn called on Richard and Claire with a request they could never have guessed would have come their way: ‘Will you be godparents to our baby and will you guide her through baptism at the university church? You know our opinions. We could never be believers, but we look at your lives and we look at what we hope for baby Emily and whatever it is that you have, that we want for her.’ Richard and Claire were dumbfounded. But we who were their friends knew what the neighbours had seen – their lives so pointed to Christ that others saw him.
In word and deed – testify to the light.

Picture John the Baptist by Rodin.