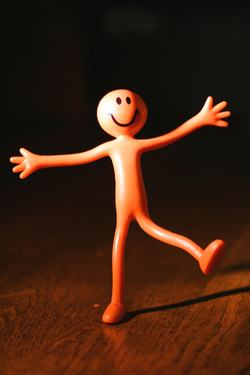 Once a parishioner was painting a small chapel. It was one of those small white picturesque chapels. As he began to get to the windows he noticed that there was a great deal of church left and not much paint. So he added some paint thinner to the bucket and proceeded on. As he reached the eaves of the church, he again noticed that the paint was running out. So once again he added some thinner. Well, by the time he reached
the steeple, his paint was so watered down that it was not covering up the old paint. So he bowed his head in prayer in search of divine guidance. A clear, stern voice came to him and advised: "Repaint and thin no more."

Why is that funny?  Tunes in to the negative picture of religion so many people have. The fierceness and anger of a John the Baptist.

Then there’s the common picture of  God. My teenage daughter has recently got into some heavy conversations with friends at college because of the recent vote in the CofE’s General Synod. One  of the things that surprised her in those conversations was the image of God
even youngsters seem to retain. She reported that God as a crotchety old man is alive and well! The everyday picture of God as an aged old man with a long  beard, seated eternally on his throne, and busy prying into the lives of both those who are his people and those who aren't, is just that – an everyday picture. We might like to think that thoughts are more sophisticated than that –  but they aren’t.

This god has in front of him a great book with the names of everyone in it, and alongside each name are ticks and crosses; a giant celestial score book, which will determine whether at the end of our lives each individual will graduate or not. In the face of this possibility we need to be ever careful, sober and vigilant lest our celestial score enters the red! This is a fundamentally negative picture. Repaint, even repent and sin no more.

And so we hear John the Baptist, this angry young man from the desert, who calls people a bunch of snakes. We don't
know where his anger came from, except possibly from his understanding of God. Sometimes the fierce, passionate, demanding love of God is experienced as anger. When God loves you so much it often feels as if anything you do that is
disappointing must make God angry. God's fierce, passionate love surely still tells us that there are things in this world to get angry about. Shouldn't we be angry about all that belittles people; all that besmirches this good earth -  that lays waste land and ocean. And shouldn't we be angry as prophets about those who will be maimed or killed today by the thousands of mines and bomblets left behind from so many conflicts?  And ought we not to be angry about the diseases that invade our bodies and the bodies of others we love?

Anger, like the anger of John the Baptist, can be used to prepare the way for the Lord. Negativity - anger can be used to straighten out  some people and some of our ways. Anger at disease has caused a lot of people to commit themselves to getting rid of that disease. Anger at what disrupts and corrupts causes people to strive against those things.

But anger alone, even the kind of righteous anger of some prophet like John the Baptist, isn't enough, although it might be preparation for something better. Anger and fierce indignation have their place – but mustn’t be allowed to be the ultimate characterization of faith. Anger can get people's attention, but it is grace which opens the way out of the corner they are boxed into.

Repent and sin no more. But John  didn’t leave his hearers with his stern angry message; there is something,  someone more, and he said, ‘I am not worthy to untie the thong of the sandal of the one who comes after me ...’

If we were still in a church that used Latin for worship, today would be referred to as "Gaudete", or "Rejoice"
Sunday.  ‘Sing aloud, O daughter Zion; shout, O Israel! Rejoice and exult with all your heart.’ as we heard from
Zephaniah. In the world of faith joy comes before indignation and anger.

Every time we use the word "holy" or "holiness" we run the risk of treating it in the manner the world does - all negative - something other, alien, risky, cold, full of demands, and not at all an attribute to which anyone would really aspire. But holy, as God looks at it, seeks us and all people, it is closer to our own human nature than we are ourselves, it is totally secure, for there is no security whatsoever anywhere else. God's holiness is warm, it makes no demands, in reality it describes the person I really would like to be.

I was moved by the story of a  grandmother, known as Gagi. It was told by her granddaughter – though I’m afraid I can’t now remember where. She put it this way: at the time of her grandfather's death, at 90 years of age, her grandparents had been married for over 50 years. Gagi felt the loss deeply. She retreated from the world, entering into an extended period of mourning. Her grieving lasted nearly five years.

One day the granddaughter visited Gagi expecting to find her in her usual state of quiescence. Instead, she found her sitting in her wheelchair beaming. When she didn't comment quickly enough about the obvious change in her demeanour, Gagi confronted her: "Don't you want to know why I'm so happy? Aren't you even curious?" She went on to explain:
"Last night I got an answer. I finally know why God took my husband and left me behind to live without him. Your grandfather knew that the secret of life is love, and he lived it every day. I have known about unconditional love, but I  haven't fully lived it. That's why I had to stay behind. All this time I thought I was being punished for something, but last night I found out that I was left behind as a gift from God. He let me stay so that I too could turn my life into love. You see, you can't learn the lesson after you die. Love has to be lived here on earth. Once you leave, it's too late. So I was given the gift of life so that I can learn to live love here and now."

The granddaughter continued that although age inevitably continued on its course, Gagi's life was vigorouslyrenewed. She became a force for reconciliation and good relationships in her family. In the last days of her life, Gagi was admitted to the hospital and her  granddaughter visited her often. As she walked toward her grandmother's room one  day, the nurse on duty looked into her eyes and said, "Your grandmother is a  very special lady, you know...she's a light." Yes, love and joy lit up her life and she became a light for others until the  end.

What we have to realize is that  everything we have is a gift from God, even the gift of life. And these gifts  have been given to us to use and then to give them away. Yes, maybe we’ll have  much to regret in misuse of these gifts; maybe we’ll be angry at ourselves and  others; but don’t let those things turn the grace of God into something  negative. All is grace comes first – always. Rejoice. So it is that John says  that those who have two coats or more food than they need should give to those  who have none. When Gagi did not give away her life to others in love, when she  was focused only on herself, she was not happy, she had no reason to live. But as soon as she came to the realization of another way, things changed.

Let’s rejoice in this, the great goodness of our God, who uses peace and joy and love to win us to him. Let’s rejoice that God does not use threats and gloom and fear. Negativity does not teach grace. Let’s live in the light of joy. ‘Rejoice in the Lord always; again I will say, Rejoice.

NB Information as to the origin of the story of Gagi would be appreciated so that proper acknowledgement can be made, please email 'theosoc' inserting the usual sign 'msn.com'