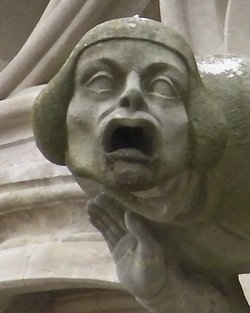 The people back home couldn't really understand what had happened to little Johnny.  He had, after all, come from a decent, good family. His father had even been a lay minister in the local chapel. But this young man had left the neighbourhood after his parents died, and for years  no one knew what had happened to him.

Now they were hearing that he had joined or started (no one knew for sure) some kind of commune far from civilisation. From all reports he was living off the land. A New Age traveller you might call him. Not that he was involved in those kinds of things you hear about them. He  had nothing to do with drugs, booze, or magic mushrooms. But he had nothing to do with anything that would remind you of a decent, civilised society either.

Almost everyone commented on the fact that he was angry, always he was angry. He might even have been angry at himself to look at the way he dressed. His clothes were the kind a rummage sale would reject. His hair was not only long but also unkempt. What most impressed people, though, were his eyes. There was anger in his eyes, his clear blue, piercing  eyes that seemed to see right through people.

Johnny had turned preacher out there in the  wilderness. To him God was a holy terror, a fire ready to come and consume the earth; burn it, destroy it, as a way of getting back at the people who had made a mess of the earth and their own lives. This local boy turned preacher often 'shot from the hip' with his words, and he didn't hesitate to call people a
bunch of sinners and to name the sins in black and white. He told people what they were supposed to do: some radical sharing of rich people with poor; of being honest in their dealings with other people, and not letting the  bureaucracy allow them to cheat others.

He was the angry young man - long before the phrase came into vogue. Perhaps you've heard of others like Johnny. An angry  feminist, who cannot stand any use of sexist language or sexist stereotyping anywhere, but especially in the church. John the Baptist would fit the model. So would a young lawyer who sees something that's wrong and wants to change it. Or
it's an older woman who is just plain tired of the way older people are being treated.

But perhaps you feel anger is a strange emotion to dwell on in the context of the Christian faith? Doesn't God demand of
us, sometimes, anger? Religion cannot be all comfort and warm strokes - if you don't leave here sometimes disquieted and ill at ease, even angry, then the Gospel has not been preached amongst us. God addresses us so as to make us
uncomfortable with a sinful world where we feel far too easily at home.

After all there is plenty and enough anger around in people. Most of us know about anger from our own souls and bodies.
We've felt anger about something we've seen as wrong or something that has hurt us. We don't always know what to do with our anger, and sometimes we spout off too long and too hard, and our anger hurts others. Other occasions we are angry and there seems to be nothing we can do. How can our anger change the fact that little kids are put there right in the middle of most of the world's bloodiest places, or that people are still traded as little more than slaves in the
21stcentury, or that children are abused and murdered as if they are worth nothing on the streets of too many cities, or the depravities of forced labour, or the countless other  examples of humanities gross inhumanity?

Prophets are sometimes like that. The prophets in the Bible and the prophets  who sometimes inhabit the mouths of preachers or lawyers or feminists sometimes make us squirm. Part of what they say is true, and we squirm. But then we want  to fight back because they don't always give the whole picture. Sometimes the  anger in a prophet simply drives us off and we wish that they would learn that  you catch more flies with honey than with vinegar. If they'd only talk to us rationally rather than out of anger and all that emotion.

But sometimes, sometimes, there is need for an angry preacher or prophet or an angry somebody because the truth is that
you and I don't always operate very rationally, and sometimes someone has to  come along with enough anger to blow us into attention.

And so comes John the Baptist, this angry young man from the desert, who calls people a bunch of snakes. We don't know where his anger came from, except possibly from his understanding of God. Sometimes the fierce, passionate, demanding love of God is experienced as anger. When God loves you so much it often feels as if anything you do that is disappointing
must make God angry. God's fierce, passionate love surely still tells us that  there are things in this world to get angry about. There are people to be angry about who keep spreading around pornography and trying to make us think that the
body is no more than a bit of flesh to be used and abused. Shouldn't we be angry about all that belittles people; all that besmirches this good earth - that lays waste land and ocean. And shouldn't we be angry as prophets about those who will
be maimed or killed today by the thousands of mines and bomblets left behind from so many conflicts?  And ought
we not to be angry about the diseases that invade our bodies and the bodies of others we love?

Anger, like the anger of John the Baptist, can be used to prepare the way for the Lord. Anger can be used to straighten out
some people and some of our ways. Anger at disease has caused a lot of people to  commit themselves to getting rid of that disease. Anger at what disrupts and corrupts causes people to strive against those things.

Anger at another person can get that person's attention, make them stop and consider how they have hurt you, and whether or  not they want to change their ways. But anger alone, even the kind of righteous anger of some prophet like John the Baptist, isn't enough, although it might be preparation for something better. Anger can get people's attention, but it is grace which opens the way out of the corner they are boxed into.

The Church observes the birth of John as in some way sacred; - there is no other figure of faith whose birth we celebrate except Jesus himself.  We celebrate John’s, as we celebrate Christ’s. According to Saint Augustine John is in his person a kind of boundary between the two aspects of  believing. That he is somehow or other a boundary is something that the Lordhimself indicates when he says, The Law and the prophets were until John. So he represents the old and heralds the new. Because he represents the old, he is born of an elderly couple; because he represents the new, he is revealed as a
prophet in his mother’s womb. You will remember that, before he was born, at Mary’s arrival he leapt in his mother’s womb. Already he had been marked out there, designated before he was born; it was already shown whose forerunner he
would be, even before he saw him.  In his birth, in his person, in his message, in his anger, John is the precursor.

Mystics throughout the ages have understood how the holy fire burns away the superficial images and idols we erect. One of the most famous expressions of this reality comes from French philosopher and mathematician Blaise Pascal. He wrote, "In the year of grace 1654, Monday 23 November ... from about half-past ten in the evening till about half an hour
after midnight: FIRE.... God of Abraham, God of Isaac, God of Jacob. Not of the  philosophers and the learned. Certitude. Certitude. Emotion. Joy! Joy! Joy! Joy! Tears of Joy ... My God ... let me not be separated from thee for ever." Pascal
carried this description of his experience with him for the rest of his life. It was written under a drawing of a blazing cross.  John points in the same direction, to the One who will baptize with fire and ask us to take up our crosses. The fire that blazes forth in this story is not from a cozy fireplace. It is from the word of God.

As Pascal realized, underneath the holy fire is holy joy. If John the Baptizer can be described as a killjoy, it is
because the joy that he kills is the false joy of manufactured sentimentality and superficial jolliness. Underneath John's stern message is the good news that a better world is possible by the grace and power of God.

Anger is energy focused on an issue with burning clarity; grace and love allow the energy to flow into some constructive
ways and allow others to work with you. Anger focuses on an angry God; anger with grace and love focuses on a passionate, fiercely loving God, who comes to us through the Christ. Anger is in the words of a John the Baptist or a prophet  of our own time, and it can lead to the revealing of the Christ in our midst, the Christ who reveals to us that the heart of God burns with passion for us.

Anger, even the angry words of a prophet of God is not enough. Anger is not enough, but it is needed. Anger can be the fuel burned by God's passionate love in us to prepare us, and our  world, for a better life. Indeed, God's love in us, coupled with anger, is a sign that the kingdom of Godhas come upon us.