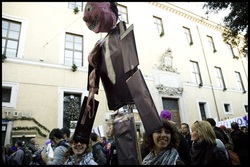 Well Berlusconi’s gone. And Monti has replaced him, ably
assisted were told by Passera, Catricala, Fornero, Di Paola. I’ve no idea who  they are – and hopefully that’s not the case for the Italian people – but we, along with all the other millions of people feeling the economic chill, are to  trust them. They are experts. Though, as one lady said to me this week, she  didn’t trust perts let alone ex-perts.

I was immediately reminded of visiting the European
Council in Strasbourg. The pre-visit security means you’re issued a personal  badge you must wear whilst in the building. As well as your name it details why  you’ve been admitted. Mine said: ‘Christopher Burkett Expert.’ Wonderful! So taken with it, I’ve kept it. The only drawback to wearing it is that inevitably
someone says, ‘Expert in what?’ And that defeats me.

We all hope that question won’t defeat the new Italian
government of technocrats – experts. There, as in so many other places, we need
experts – people who know what they are doing – to get us all out of a mess of
debt, decline, and dismay that’s touching everyone.

The economics of it all is often beyond me. I have to
confess that I don’t understand the half of it, so I’m hoping against hope that
someone does. That someone knows what they’re doing.

But then a disconcerting thought strikes me from this
story that Jesus told. We’re being persuaded that we need people who know what
they’re doing, but in the Jesus story the righteous – the heroes of the piece –
have no idea what they’re doing / What they have done!

The king says, ‘You’re blessed, the whole kingdom is
yours because you served me again and again. What a joy you folks are.’ And they
reply, ‘You what? I can’t remember doing any such thing.’ They weren’t experts
in social care, food logistics, or penal reform. Their good works didn’t arise
out of a policy decision, a funded campaign, or an aid strategy; as useful as
those things might be. No, the good things they had done had no premeditated
quality to them at all. No expertise was exercised here, in the sense of
consciously learnt technique and application. None!

What they had done was feed, comfort, visit, cloth and
the like without a second thought – without a moment’s calculation – without
training, instruction or practice. These efforts had simply issued from the
people they are – as natural to them as breathing, without the hesitation of so
much as a blink. They didn’t know what they were doing – they just did it. The
love of God had all unconsciously just poured out of them. No scores kept, they
don’t know what they have done.

Of course, it doesn’t work the other way about. The
unrighteous are all too clear about they had done. They know that they had
not responded; they know what they hadn’t done. The calculated failure to meet
need means that they are cast out of life forever.

In Matthew’s gospel this story is the last word from
Jesus. Now Matthew’s narrative will move on to the passion. It will tell of what
happens to Jesus and that small band of followers who stay close to him – those
awful last days and his death. His teaching is at an end.

His last word is about the last things – about judgement
at the end of time. But it’s not some fanciful story of a future age or a
calling to account after death. It’s put in such a way that it asks a hard
question of every person who hears it: Do you know what you are doing day by
day, every single day? Do you live as a person who gives away God’s love, God’s
gift of life, of care, of liveliness, without keeping score?

This is about living in such a way that trust in God,
trust in life itself, oozes from your very pores and flows all unconsciously in
action and concern for others. This is faith that saves because it is entirely
un-self serving. The ones with this faith don’t know what they are doing because
the calculation of benefit to self never enters their heads. Live like this and
you are blessed – here and for eternity. Live like this and you will experience
‘the immeasurable greatness’ of Christ’s power of life.

The American theologian and educationalist John
Westerhoff tells the story of a mother and her disabled son. She acknowledged
that she had overprotected him, but one day she let him go to the local shops
alone. When he hadn’t returned as quickly as she thought he should, she in her
anxiety hurried to find him. She found him limping up the street, whistling as
he went. “Where have you been?” she blurted out. He replied, “I saw Carol, she
dropped her doll and it broke.” “So you stopped to help her pick it up?” mother
continued. “No, mother,” he said, “I had to stay and help her cry.” There’s a
boy who know a lot about living – about giving yourself away – your attention,
your care, your sympathy, your time.

In the parable the things the righteous have done aren’t
‘good works’ in the sense of things deliberated about and planned; they are
good working – just like the disabled lad and his care for his friend
Carol – this is what a life lived as if means something, looks like. This is
what faith in a gracious God does – it works for good because life is like that,
FULL STOP. And when life isn’t like that, life becomes a diminished and
impoverished thing that can easily become hellish.

Way back at the beginning of our National Health Service,
Nye Bevan, one of its architects, said: ‘There is no substitute for the good
neighbour.’ The NHS freed my grandparents and their children from that nagging
worry of whether they would be able to afford health care when a crisis came.
What a blessing. But they, like Bevan, knew that didn’t mean the end of
neighbourliness and they would never have questioned that there was still food
to be shared, bed linen to be done, visits to be made, other people’s children
to be cared for.

But today, if my neighbour is depressed, then that need
not interfere with my weekend arrangements: let them seek professional,
institutional, expert assistance. This isn’t to disparage excellent work in
those structures, but to draw attention to the fact that too much respect for
the ‘expert’ can rob us of the simple ways by which we express our mutual care
for one another; can rob us of trust in life even; and can rob us of being
trusting enough to simple launch into what is life affirming and hopeful,
without calculation and without keeping score.

In the story Jesus is the king, but he’s not a king who
is like any of the kings of this world, even the most benevolent. Jesus is among
his people. And he is among his people as a king – but a king who serves. I
can’t help feeling that the people who composed our lectionary, our selection of
Bible readings for worship got it wrong in this one. They have the reading
ending with the eternal blessing of the righteous and the eternal punishment of
the others. Yes, it’s that serious – a hellish division quite literally. But
Jesus didn’t end it there, the gospel story continues:

When Jesus had finished saying all these things, he said to his
disciples,2‘You know that after two days the Passover is coming, and the Son of
Man will be handed over to be crucified.’(26.1-2)

In other words, it’s all been said. Jesus has taught the
reality of God’s will, he’s used his words to shape a new humanity, a new way of
living, and called into being the community of the disciples. You’ll find the
same underlining of the fact that all has been said in the story of Moses. Like
Moses, Jesus has taught a better way. And what is going to happen next
demonstrates both a continuity and radical discontinuity with Moses. These
things happen at Passover, the festival that remembers the liberation of God’s
people from slavery in Egypt. Here is another victory over tyranny but of a
different order altogether from that earlier liberation.
The Moses movement was a victory over a tyrant. It was a political action
with social consequences and profound religious ramifications. And the Jesus
action and the movement that flows from it will be all those things – and
more.

What King Jesus will do will open eternity now – it will
disclose the loving heart of the cosmos and seek the constant echo of that love
in the heart of every living soul. Every day, every choice, every action is
either an echo of that cosmic heartbeat or the deathly denial of that heartbeat.
Every day. You have a choice. Jesus says, ‘Everything that you did not do to one
of these of these, you did not do to me.’

‘And the Son of Man will be handed over to be
crucified.’

Hear the story anew. It tells of eternal consequences.
Our God reigns – but he reigns from a cross. Everything has been said and now
you’ll see God faithful even to death. This is the mark of his kingship – a
servanthood that bears all things, even death. Live as those who trust that
kingship. Give yourself away – every day, every choice, every action. Be the
echo of the cosmic heartbeat: let it sound in your living, your ordinary,
everyday, un-expert living – give, welcome, clothe, care, visit –here, now, for
eternity.