Where there's muck
A story sermon for Lent 3C
Luke 13.1-9 The sermon on which this commentary is based is here. 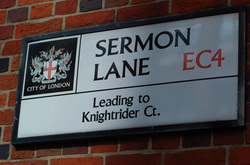 This sermon does employ, briefly, direct theological analysis but not
until a narrative of George’s life has been given in some detail. The story
serves as a commentary to this theological analysis – the very serious issue that Jesus discusses and his call for repentance is framed within a village tale. That tale aims to be an empathetic parallel that allows Jesus’ words to be heard as down-to-earth good news.

Why use a story? Here is the preacher’s reasoning behind the method:

Jesus often used stories. The story (parable) the Lucan passage  concludes with is used here as a motif for the story sermon. This is a story deliberately associated with a story told by Jesus the storyteller. That deliberation asks for a response by the very fact of its association. The hearer must decide whether this is a fitting story to be a commentary on a
Jesus story.

Stories shape experience. The Gospel writers shaped their accounts of Jesus’ actions and words in a story form. Using a story to interpret that  greater story allows their shaping to in turn shape what the preacher says. This isn’t to claim that this is the definitive way of approaching the Gospel texts, but only that form as well as content offers a way of getting closer to Christ.

Stories engage. The narrative form draws the hearer into the account. Wanting to know ‘how it turns out’ keeps the hearer with the speaker. The question in the story of George is whether he could make something good of what others thought a lonely and derided life? The implication from the start is that there’s much more to George than most people saw, but the hearer wants to be reassured that such is the case.

Stories appeal because they use familiar forms. Stories employ everyday language and thought forms that subvert complexities of language and ideas. Stories by their very ordinariness can examine issues that complex language and conceptual approaches sometimes obscure. In this case the Gospel passage starts with Jesus in conversation, and then moves to him as a storyteller – this familiar and vernacular style is then taken up in the story sermon. Jesus is  dealing with profound issues about suffering and making a challenging and unequivocal statement about evil, yet always in a common language form. In the story sermon the use of a common saying – ‘where there’s muck there’s money’ –  underscores such usage.

Stories make for directness and applicability. In the conversation and parable Jesus uses sharp words. His expression is neither qualified nor elaborated. Its’ very directness is a key aspect of its power to communicate. Using a story form allows a continuation of that sharpness. The words used to describe how George is treated replicate Jesus’ directness. The story sermon ends by a question just as directly asked of the hearer.

Stories are memorable. Narratives ‘live’ in people’s minds in a way more conceptual expression does not. Remembering plot, characterisation, development of ideas, and many other aspects of things said or read is all more
readily done within in a narrative framework. As the memory masters of old knew, and as contemporary situational comedians exemplify, much more can be remembered if it is encapsulated in a story. Add aphorisms that are memorable  or already well known and hearers will remember with very little encouragement from the speaker. This is just the kind of response the expression ‘where there’s muck there’s money’ is aiming at in the story sermon. Its turning into‘where there was muck there was mercy’ seeks to make a theological point just as memorable.

Stories provoke imaginative participation. The parable of the fig tree in the vineyard provides a good example. Jesus uses very few words but nevertheless it is easy to feel the owners indignation and the gardeners clever  response; it is easy also to ‘see’ the green but fruitless tree in contrast to  the fruiting vines so near to it; and finally the gardener’s wisdom asks for a response but that it is given is left entirely in the hearer’s mind. The story sermon in a similar way paints several scenes and asks the hearer to fill-in the details. What the hearer ‘sees’ is a vital part of the story but it isn’t proscribed by the storyteller. Much is left for the hearer to complete in his or her imagination.

Stories use our emotions. The hearers of a story are enabled to add their own emotional response without necessarily disclosing it to anyone else. This gives a safe space in which hearers are freed to utilize their own
emotions. Because this use of emotions is largely an interior event in the person’s mind a wide-range of varying responses are possible. For example, and as is suggested in the sermon, the line about manure in the parable might be read humorously. Is Jesus saying that mulching the fig tree – the central and obviously dominating presence in the vineyard of much smaller plant – is a metaphor for those prominent in the faith that are evidently not fruiting as they should? Perhaps covering them in muck might prompt them to produce good fruit! Could this be Jesus making a joke at the expense of the religious establishment? Whether it is or not, the way manure and its’ associated terms are used both for humour and for insult is picked up in the story sermon. Without being vulgar, the story sermon attempts to employ colloquial humour and
insult in a way that connects with ordinary experience in an insightful way.

It remains for the hearers to decide whether the story of George connects their thoughts with the words of Jesus.

‘Who sinned, they said, this man or his parents? But the question is senseless. It applied no more to George than it does to you. In his life where there was muck there was mercy. And that's always the way with God - muck and mercy. Live it or perish.’