Growing up in faith
First Sunday of Christmas
Luke 2.41-52 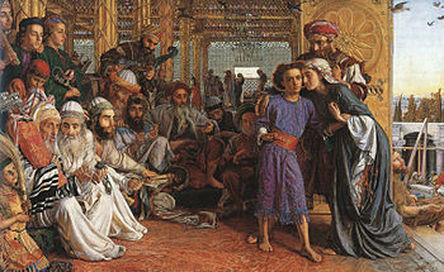 The Finding of the Saviour in the Temple, William Holman Hunt (1860) Birmingham Museums
A young woman is with child, and she will bear a son ...

What could be more commonplace than the birth of a child  to young woman? It is happening hundreds of times over as I speak. Jesus is  unique not because he is abnormal, some weird being the like of which is lmost
beyond belief, ‘veiled in the flesh the Godhead see’as the carol puts it, which almost amounts to heresy in my mind.

No, Jesus is unique because he alone is the truly normal person. He is the only one  so far to perfectly wear the human form divine.  Remember he is called the  first fruits,  the forerunner of the race, his is our calling. The light that comes to focus in Jesus is the light that enlightens every person, that potential that is so sadly and so desperately unfulfilled in poor humanity. What I'm really  talking about is growing up, growing into Jesus because of what he can make of us, not what we can make of ourselves. Dr. Luke had something to say about the growing up of Jesus that provides us with our pattern to follow. He wrote Jesus
increased in wisdom and in years, and in divine and human favour (Luke 2.52).

These are the four our areas of growth that need to be cultivated for our wholeness, our healthiness, for our holiness in his
kind.  Jesus increased in wisdom and in years, and in divine and human favour .

He increased in wisdom. In mental alertness, in inquisitiveness, awareness. This is nothing to do with academic ability, nothing to do with being an egghead. It is about frankness, integrity, and the refusal to be palmed off with second rate answers, the refusal to be content with the way things are. Pressing forward, alert to God promptings in the world; facing
the challenges and issues of our day. Using our mental capacities to the full in the issues, needs and questions of our communities and neighbours.

He increased in years, in stature, in other words he grew physically. Surely there is not much to be said of this most obvious part of growing up? But what of a world where the rich source of life itself is wasted like so much junk? How many children in these minutes will needlessly die in our world? Herod had the innocents slaughtered and it continues. And which of us in this building is not guilty of abusing the gift of this mortal body? Not one! Who has not overindulged? Who takes responsible exercise? We don't think of our bodies as a religious issue, but they are. Coping with our bodies, in health and in sickness, is part of our Christian vocation for the Word became flesh.

And he increased in divine favour, he grew spiritually.  He knew as a reality God as his father and he gives us his Spirit that we may know that same relationship. Here we religious people are at home; we know our need to grow spiritually, growth which must never stop this side of the grave. But there is a sting in the tail, spiritual growth counts for little, indeed can hardly be said to take place, unless it includes growth in other areas.  The words of Jesus are quite clear. Leave your gift make up with your adversary first. Not everyone who calls me Lord Lord ...

He increased in human favour. He grew socially. Perhaps the hardest of all to come to terms with. Privatised, individualised religion is the scourge of the gospel. I made my communion.  I do not. You won't find the singular anywhere in the Eucharistic prayer -  we lift up our hearts, we give thanks and praise, we celebrate, we worship. It is the people of God, not the individuals of God. We are called to a sociability that spills over into the world, into our community, that sees itself as alive and alert to the needs of all humankind.

Jesus increased in wisdom and in years and in divine and human favour. Let us grow up to be like him, mentally and physically spiritually, and socially. I believe in the incarnation because it gives me that hope.  A one theologian put it: God
is, he is as he is in Jesus, therefore there is hope of, and hope in, being human.