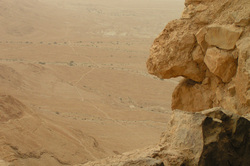 Who do you think you are? is a hit BBC TV show. Now in its ninth series, the formula is very simple: ‘celebrities trace their family trees.’ And we, the viewers, get to  eavesdrop on familiar faces learning unfamiliar truths about their ancestors.  Compelling stuff – especially when emotionally potent and surprising material is uncovered. People so often discover that they aren’t quite who they thought they were, or at least that their family history is harder to live with than they had imagined.

Of course it’s compelling TV viewing because every single one of us shares the same urge to know more of where we come from? Are the stories Grandma told true? If she wasn’t exaggerating maybe I need to re-think  things. Why would great Uncle Bert never say anything about his parents? Is there something there only he knew? – why wouldn’t he say? Intriguing stuff – and we’re all subject to the same curiosity. Who do you think you are?

This is just the question our gospel reading is trying to answer. We usually miss that because this account of Jesus being tempted in the  wilderness is so associated in our minds with the beginning of Lent and therefore with our own struggles to live a faith life that we can’t see other ideas being addressed. This is all about burden of vocation from the perspective
of the person wrestling after that sense of vocation.

For example, Bishop Stephen Cottrell has recently written (2008, page 18 in Hit the ground Kneeling: Seeing Leadership Differently, London:CHP):
‘Jesus seeks to discover what his vocation might be. He tests out what direction his life must take. He wrestles with himself as much as with God. Then after forty days the devil appears to him and he faces three
particular temptations.

First of all, Jesus is tempted to turn stones into bread. This is a temptation to be flashy, to be relevant.

The second temptation is to throw himself from the roof of the Temple and let angels catch him in their arms. This is a temptation to be spectacular, to be popular.

The third temptation – the most dangerous and seductive of all – is to be powerful. The devil shows Jesus all the kingdoms of the world  and promises they will be his if he bows down and worships him.’

‘These temptations are alive in all of us.’

The story of Jesus in the wilderness in this so-familiar version becomes an exemplar of a disciple’s struggle to discern God’s way in her or his life; what the barriers that stand in the way of that will look like; and how profound and deep temptations that divert us from that way can be. Take strength, it says, because Jesus wrestled with the self-same things. Sure those things were dressed up in first century images and language – but at heart they are the things of intention, fulfilment, and power that we all know all too well.

This is an understanding of Luke’s story that brings us close to a psychological appreciation of our own and other people’s behaviour. Despite the ‘strangeness’ of the story in contemporary terms – we know little of  forty-day fasting or of having conversations with the devil – this interpretation has a certain resonance to it. ‘Yes, I recognize what’s being described in me; I want others to think I know where they’re at, I want to impress, and I want to use power so that others can see it’s mine. Yet too often I don’t see the dangers in all this. I fail to see the harm that I do, and am  often blind to the consequences of my own actions.

There are things here that I need to hear, but are they what Luke wants me to hear? I think the answer to that has to be ‘Well, yes; but no!’ The problem is that it’s all too easy to be bowled along by this apparently deeply relevant interpretation and entirely miss the profound issue that I feel sure was uppermost in Luke’s mind.

Applying the TV show title ‘Who do you think you are?’ will help us get nearer to Luke’s thought. Luke intends to tell his readers just  who he believes Jesus to be. Our reading begins today at Chapter four, verse one, but remember those chapter and verse numbers are much latter additions. Luke didn’t divide his writing in that way. My contention is that the we get much closer to hearing what Luke wants us to hear if we begin today’s’ gospel reading in Chapter 3 – including verses that we never hear read in public:

The question applied to Jesus is, ‘Who do you think you are?’ and by tracing his family tree right back to God, could it be that Luke is asserting that Jesus is the Son of God alongside the detail of the human family tree that points at one and the same time to his genuine humanity.

Do you remember that Matthew also has a genealogy for Jesus – but the two aren’t the same in content or length. Luke’s is longer and goes in the opposite direction to that of Matthew; it begins with Jesus and works backwards all the way to God. Its’ very length seems to emphasise the significance and honour due to Jesus.

Luke believes in Jesus in a way that many would find  incredible or downright offensive. So Luke hurries to keep his readers with him: ‘You think I make claims that are over the top for a peasant artisan from Galilee, well listen, right at the very start of his ministry among the people the adversary, yes, the devil, tested him out. And he wasn’t found
wanting.’

Nothing could be hidden in this encounter – we’re talking about the cosmic level where everything is open to God – no hiding places, no secrets. It starts to have echoes of the Book of Job about it – another person whose deepest longings and loyalty was tested to the extreme. Like Job the true heart of Jesus is exposed in this encounter. Like Job his loyalty to God is beyond question – he will only honour God, he will not attempt to test God out, he will acknowledge his relationship to God alone. His kinship is with God the Father, and that is enough.

The adversary has nothing on Jesus.

It’s as if Luke is urging: Reader, you can see this for yourself. Stay with me now for I’m going to tell you an amazing story, in the  words and actions of Jesus that I have recorded here – you’ll again and again see for yourself the truth of what I’ve written –you’ll see Jesus full of the Spirit achieving marvellous things – believe in him.

Here’s a life to give you life. This is the life of one who will never deny his relationship with his heavenly Father– no matter what. Stay with this story for in it you will find security and hope.

As that great missionary pastor and scholar Lesslie Newbigin put it, this story is ‘the story of which my life is a part.’ ... This story ‘commits me personally to a life of discernment and obedience in the new circumstances of each day.’ (1994, A Word in Season, London:Eerdmans).

Hear in Luke’s story challenging strangeness and reassuring familiarity so that you may answer your own ‘Who do you think you are?’ because you know who Jesus is.