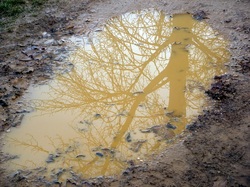 Where there's muck there's money so they say. If it's true George should have been a millionaire!  His small farm was awash with muck.  The land was low-lying and mostly dense yellow clay so whenever it rained the water had nowhere to go and would become vast shallow lakes.  Add the
churning of cow's hooves and their generous contributions of manure and yes the place was literally awash with muck.

The state of the buildings and the farmhouse matched the condition of the land.  Slates were missing, sheet tin was rusted away making great holes in shed walls, no door seemed to fit - even in the house - and all was disarray with bailer twine the universal remedy for holding things together or keeping doors closed. They had electricity, but the cables straggled across the surface of walls dark stained with damp. 'How can they live like that?' people used to say.

Neighbours and villagers who knew of them described them as living in squalor.  With the judgement came profound isolation.  No one went to the farm unless they had to.  To say that George was friendless would pitch it wrongly, suggesting that he was a stranger to those around about.  But he wasn't.  Anyone who had lived in the village for any time knew exactly where George was from; knew his parents and his grandparents.  new their achievements, where they had lived, what had been theirs'. If friendless means unknown of - that couldn't be said of George.  Indeed he was un-befriended precisely because so many people knew so much about him and his family.

I guess you'd call them yeoman stock; people with their own land.  Not landed in the sense of landed gentry, but with enough land of their own to be beholding to no one.  For several generations before George they had been amazingly successful.  When others went out of business or barely managed to survive, George's family had prospered.  Their holdings grew, and they had to hire more and more workers outside the family to keep the enterprise expanding.  Such was their success that George's father managed to retire at the age of fifty - something just about unheard at the time.  He lived until he was 98 - the larger part of a life of so many years lived in leisure with never a care about money.  That's the family, and that's the story, that so many locals knew. But they told another story of George.

The way he looked made that other story all the more convincing.  You see George was hydrocephalic.  His head was enormous and quite out of proportion to the rest of his body.  It permanently dropped towards one side as it weight was too much for spine and muscle.  Its disproportion meant he walked with a strange backward lean, as well as dragging one foot.  George's final distinguishing mark was his permanent dribble - the spittle dropping off in great gobs from the downward end of his tilted mouth.  Small children took fright at him - and older children with more spiteful urges … well, you can guess.

But this tale isn't about children who don't have the experience to make proper judgments, or have yet to learn to know better. No, this is about adults who should have known better.

When they saw the cow manure swilling across the road outside George's farm house it gave them the perfect vocabulary for their shouted insults.  I don't need to tell you - you can imagine what they called him.  You can label it 'insult humour' if you want to be clever, and they thought there were being.  Like that story in Luke's Gospel about the fig tree:  if the fig tree stands for the religious leaders of the day, as it surely does, then imagine what fun the ordinary folks must have had with the idea that what their leaders really needed was a good dollop of manure to make them useful, fruitful.  But their fun was at the expense of the powerful who had failed to deliver as leaders. Those who taunted George with the same
language had no such justification.  He was just a lonely soul doing his best farming a few cows - but that's
not how they saw it.  Their reasoning justified verbal abuse, the dumping of rubbish, and an all too easy ostracism that kept George out of the circle of social relationships.  When George and his wife had a child, the same treatment was meted out to him as he became older.  How can people be so cruel?

It wasn't the muck.  That was just the fertiliser for the insults.  No the hostility lay somewhere else. In fact its origin was in the very reality that so many people knew so much about George's family.  You see to their minds George was in the state he was in because sin had been committed.  His ineptitude as a farmer, his physical disabilities, and their reasons for treating him badly, was just down to this -that personal suffering and failure are caused by sin.  They didn't use that little word, but that's what they meant.

Now, of course, doing things wrong can cause immense suffering and hurt.  We all know that.  But that's not the same as saying that a person's suffering or failure is directly related to that person having sinned.  That’s the logic of the madhouse - it says that every ill person is ill because she has sinned, that every injured child has caused its own hurt; that every destructive oppression has its beginnings in the person suffering the oppression. Did the tower at Siloam fall on those 18 people because they had sinned?  Was the oppressor Pilate only able to desecrate religious offerings with human blood because the people slaughtered had sinned?  ‘No,’ said Jesus.  But that's the logic poor George had to live with.


You see George was the child of cousins who had married, who were themselves the children of cousins, and he was paying the consequence of that sin - or that's how those with their foul mouthed language of muck saw it.  ‘That cretin who chokes up the road with muck. You should see the state of my car every time I have to go that way.  It shouldn't be allowed.  The squalor he lives in.  What can you expect from someone like him?’  ‘They say that the bad will always out - and doesn't he just prove it?’  ‘No, I tell you,’ says Jesus.  There is no easy one-to-one relationship between sin and suffering, between sin and failure.  Yet the thought comes to us again, and again, and again.

The disciples asked Jesus a question that could have come straight from George's neighbours, ‘Rabbi, who sinned, this man or his parents, that he was born blind?’ The question assumes that there is a direct correlation between sin and suffering. To those disciples (John 9:3) Jesus denied that direct connection. But still the idea persists: illness, poverty, disease,
loneliness, and death are the punishment for sins known or unknown.

For Christians, the fatal blow to the idea that suffering and death are the lot of the guilty came at Golgotha. The One without sin suffered and died on the cross; some present took that as proof that he was not the Son of God (Matt. 27:39-43). But Jesus’ disciples are forever freed from the ancient notion that prosperity and good health are evidence of divine favour, whereas poverty and suffering are clear signs of divine anger…. Jesus rejects such attempts at calculation, not simply because they are futile, but because they direct attention from the primary issue—the obligation of every person to
live in penitence and trust before God without linking one's loyalty to God to life's sorrows or joys. All are to repent or
perish.

George lived his whole life as an outsider.  He died in his early 60s, mourned by a wife who loved him and for whom he
had left provision until she died in her 90s; mourned by a daughter-in-law and step-grandson his intervention rescued from poverty - much to his son's delight; and mourned by an aged labourer called Ted who had no living relative but who
was housed for a pittance by George for more than 40 years.  Who sinned, they said, this man or his parents?  But the question is senseless.  It applied no more to George than it does to you. In his life where there was muck there was mercy.  And that's always the way with God - muck and mercy.  Live it or perish.