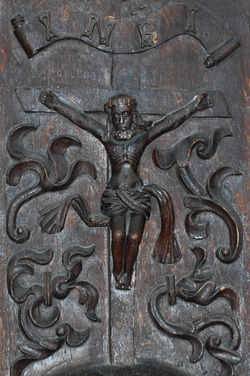 Family feuds around inheritance have been much in the news lately. Some disputing siblings have spent far more on lawyers than the
worth of the inheritance they were arguing over. The expert advice has been consistent: these things are best avoided by getting a professional to draw up the will. Isn’t that just what is implied in the story Jesus
tells?

Could it be that this is just what Jesus intended his hearers to understand? Isn’t that what lawyers are for? Isn’t there something of justice and plain common sense in such an arrangement? On the other hand, this interpretation of what
Jesus was trying to convey seems all too straightforwardly commonplace. Could it be that Jesus’ careful creating and telling of this tale missed out his message  of unconditional, gracious love? Forgiveness is such a common theme on Jesus’
lips that to suggest this parable avoids it in this way is at the very least strange.

Contrary to that legal view, many assume that the younger son was completely taken back into full and total relationship with his father when he returned. They reason that the older son would not have been so upset simply about his brother being given a party. He must have understood that the  younger son was back in the inheritance picture, and would one day receive a half of what the older brother had come to expect as the full remaining inheritance.

In fact, would there be any real weight in the story if the legal view is correct? That would make the parable all too commonplace in its tenor – quite unlike the startling quality we expect of Jesus’ parables. If Jesus' point was simply that
the younger son was given a party by his father and allowed to become a worker  on the farm it is all too conventional and ordinary. Protecting the older son's investment appears almost prosaic and mundane – not what we expect from a
parable.

That said, however, we have to admit that the legal view does affirm our natural idea of fairness. The older son has been a good son; the older son has put family loyalty and needs first; the older son has worked hard for years. He is deserving of commendation and reward. But that's just the point. That is where the argument breaks down. It is simply too legalistic, it places too much emphasis on the unfairness of the prodigal getting an additional portion of  inheritance, and relies too much on the concept of rewards and punishments.

Those who choose to call this story the ‘Parable of the Forgiving Father’ view the prodigal, younger son as forgiven and accepted by the father, and also brought back fully into the family and eventually given an additional share of the
inheritance – as unfair as that may seem to many of us.

When Jesus has the father say to the older son,‘You are always with me, and all that is mine is yours,’ he described the inexhaustible treasure chest of God's mercy and love. God makes each of us equal heirs of God's kingdom. God gives each of us an equal share, whether we come to the kingdom early or late. Our feeble insistence on fairness is a very pale shadow of such generosity.

Through this parable, Jesus illustrates that the love God has for us is of a quality that normal human values cannot comprehend. God's love and forgiveness come to us without strings. It is not related to the bad or good of our actions, but to our repentance. It is about turning around – turning our lives around – and being ready to accept forgiveness; to be born again and start anew.

In this parable, we learn that the forgiveness and love of God is beyond reason and beyond any human concept of fairness. We learn that God is a spendthrift – giving away what God has to those God loves. No human being can forgive so absolutely; no human being can completely embrace the depth of God's forgiveness and love. The parable of the prodigal son is not a story of human sin or divine fairness. It is the Parable of the Forgiving Father, the story of divine love and mercy for us sinners. The parable is a story that is almost too good to be true. It, like God's unconditional love, is almost beyond belief.