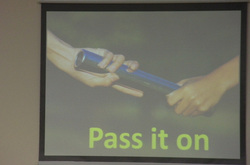 The question, of course, is right there in the text.  We know there is a babble of shouts, yet we hear in our own mother tongues.  They speak in the crude accents of yokels, these characters from a rural backwater – Galilee.  Their burr so thick that even those fluent in Aramaic find them hard to follow.  Yet I hear the most refined of Home Counties English pronunciation, or even an accent to match my own.
What does this mean?

Some sneer and say that this lot are drunk.  They stagger and whoop and shout.  And in the quiet of the morning too!  Good people should be about their work at such an hour, not dancing on the street corners.  They’re acting as if they’ve won the lottery or something.

And that’s it, the shock of triumph or tragedy disturbs and disorientates us. The moorings are loosed, the old certainties fall away in an instant.  All at once you’re no longer the person you were, or thought yourself to be. You’re reeling.  What my Grandma used to call ‘being beside yourself.’ Something dislocates you from the life that went before.

Winning the lottery can do that to you, apparently.  And the spectacle of disorientation is beloved of TV producers. Think of all those TV shows where people are wrong-footed, presented with unbelievable challenges, or suddenly shocked – people beside themselves.

But tragedy does something similar too; that road traffic incident, that death, that crushing disappointment that squeezes all the usual living skills out of a person.  Dazed and disorientated, literally disconnected from the everyday world.

Read Luke’s Pentecost story in the light of such experiences.  ‘What does this mean?’ the cry of disoriented human beings struggling to make sense of what has happened.  For the first followers of Jesus, tragedy and triumph has marked their recent weeks. Their leader tortured to death.  Perhaps that was to be their lot too?  Certainly the authorities are looking
for them.  Should they eat humble pie and go back to how things were before Jesus? Perhaps they were destined to be
outcasts all their days?  A tragedy alright.  But then the Risen Christ is with them.  Some think it too good to be true?  But others are certain - no, he is with us!  We’ve been drawn back together.  The possibilities are endless.  The world’s our oyster.  Nothing can shake this love.  And yet the task is ours not his.  How daunting is that?  ‘What does this mean?’

'My dear Mrs Blower
I feel I want so much to write to you, although I know nothing that I can say to comfort you can be of much help.

I do feel that at least you know how we grieve with you as our son Alastair was fatally wounded by the same shell which hit John. Alastair was unconscious from the first moment and died at the evacuation station and is buried nearby at Hermanville-sur-Mer. How we wish he too had been killed at once and had been laid to rest with your John and Hugh Ward by those he had fought with and who knew him, but this was not to be.

Alastair (known in the regt as "Algy") spoke with such admiration and affection of your son who was his troop leader. He must have been a very fine lad and I feel that their marvelous young spirits can never die and that they together will go into battle with the others to inspire and encourage them. They were both doing the most unselfish thing when this happened - going to the aid of their men - and surely this will not go unrewarded.

How sincerely and deeply I grieve with you and how I understand. May God comfort you. My husband joins me in sending his sincere sympathy and I do so hope you will not take this as an intrusion.
Very sincerely yours,
Doris S. Bavass'

‘What does this mean?’  One grieving mother to another struggles with the terrible question.  John and Hugh and Alastair just three names from those D Day conflicts of so many years ago.  We hold them in honour.  Why? Many reasons of course, but one is that a mother called Doris began in the agony of her loss to answer the question ‘What does this mean?’  Began out  of the things of comradeship, parenthood, fear, duty, danger, purpose, loss, to weave the deepest of hurts into a web of meaning. Began to hear in the language of her own breaking heart the spirit of eternal love.

‘What does this mean?’ asks the author Luke. It means we may all hear the whisper of God in the language of our own
hearts.

NB the source of Mrs Bavass' letter has been lost. Information to give a proper attribution would be appreciated to 'theosoc' using the usual sign and concluding msn.com