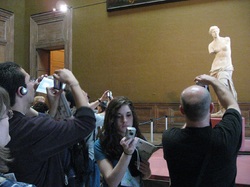 A crowd admiring Venus de Milo
Her hair parted and its waves pulled back over her ears to reveal the perfect lines of her face.  Forehead and nose in perfect symmetry.  Eyes deep set and looking away into the distance.  Her lips even and closed, but with no hint of a wrinkle or line.  She holds herself not rigid, but graciously on the turn, her neck, shoulders, waist and then hips forming an elegant, almost “S” shape.  All her weight seeming to rest on one leg, although you can’t see her legs as the material that might be her clothing has slipped to her hips making fold upon fold of cloth hanging to her feet.  Her torso is naked, firm breasts exposed to every passers’ stare.  Her missing arms not so much marring her beauty as drawing your eyes to her sensuous form.

By now I suspect just about everyone here knows who she is.  The Venus de Milo, one of the most recognizable works of art from the ancient world.  Since her broken body was discovered in a cave on the Aegean island of Melos in 1820, she has come to epitomise the great achievements of classical ancient Greece.  But even more than that she symbolises what we understand as the beauty of the human body.  Some unknown sculptor, more than 2100 years ago, took marble and carved from it something that has inspired countless numbers of people.  She simply dazzles.  This statue of Venus, or to the Greeks Aphrodite, the goddess of beauty and love, somehow encapsulates for us what beauty is.  People stand and stare in admiration, well, more than that they encounter her and know that their attention is held by something beyond description.

My words have conjured up an image of her in your mind, but they don’t do her justice.  She is in herself a statement of beauty, and no commentator, no historian or critic, no matter how erudite and or clever, can define her, adequately describe her, or sum up what it is she communicates.  She is beauty.  And no elaboration can add to what she means (though King Louis XVIII toyed with the idea of putting new arms on her), no explanation can plumb the depths of her meaning.  I can’t remember which famous artist it was who said when asked to explain one of his paintings that if he could explain it he wouldn’t have bothered painting it.  Like that, the Venus de Milo is beauty – beyond ultimate analysis, yet something every one of us understands something of.

And that brings me to the parable of the Sower.  You see Jesus was an artist, he was a Parabler.  And just like the painter and the sculptor, if he had been able to explain things he wouldn’t have bothered to tell parables.  This is a big problem for preachers.  Yes, my heart sank when I realised what the appointed Gospel reading was for today.  These remarkable little stories that are the parables of Jesus, mustn’t be explained, can’t be explained, any more than the Venus de Milo can be explained.  Encounter them, stare at them, wonder at them, wonder over them, but don’t try to reduce them to “what they mean” or you’ll kill them stone dead.

Knowing that the Venus de Milo is made of two pieces of stone combined in what was an absolutely new way; knowing that the movement evidenced in that graceful twisted pose was something different and innovative in ancient Greece; remarking on the way the sculptor has showed off with great bravado in all the complicated folds of the cloth around her hips; noticing she is one of relatively few female figures in comparison to all the male statuary of Greece – all these things and more, don’t bring you much closer to what she tells you of beauty.  And the same is true of Jesus’ parables.  Hardly surprising then, that the preacher is tempted to sleight of hand, pretending to be able to sum them up, to reduce them to principles, to distil their essential quality.

Matthew and the other gospel writers had just that problem, so they added a long explanation, what we heard as the interpretation in verses 18 to 23 of today’s gospel reading.  Did you notice the jaundiced tone of the gospeller’s explanation?  What he is saying is that his problem in preaching is basically the fault of his hearers.  Oh, I know that excuse all too well!  You listeners, you’re the real problem.  It’s bad soil that is the problem.

When the seed falls on the path of your lives, you are just too shallow to let it take root.  You rocky-soil people get all excited by the gospel seed, but you don’t last.  As soon as there is any trouble or dissension, you can’t be seen for dust.  And as for you thorny folks, you let everything else choke out the gospel in you, determination and consistency aren’t things you put much effort into.  It’s bad soil that is the problem – this really lets the preacher of the hook.  It’s your fault, not mine!  What a relief – except I’m certain that this is secondary, this is the frustrated preacher talking not Jesus the Parabler.  In Jesus’ story the contrast is between the seed scattering and the harvest – the stress on the quality of different soils isn’t there.  Yet the allegory, the explanation, so dominates that it is easy to miss the difference, but it is definitely there.  Don’t let your encounter with Jesus the Parabler be confined, defined and limited by this.  Look at the art for yourself.

Generations of art scholars have made careers out of analysing the Venus de Milo.  Didn’t the late Kenneth Clark, you know the one who made that famous TV series Civilisation, write at length about the statue?  I seem to remember a long discussion about the measurements between the different bits of her body.  Fun it might be, but such discussion mustn’t detract from the awesomeness of Venus’s sheer beauty.  She is not to be tamed by such things.

Jesus the Parabler is not to be tamed by any preacher.  Parables are disturbing, baffling, puzzling, and wondrous.  They are meant to be.  To explain a parable is to kill it, to deprive it of its fire and fury, of its power and intensity.  No, to stand before Jesus’ parables is to stand before an art-form, as you might stand before the Venus de Milo.  It is an event, a happening, when your life and the life in the story touch each other.

Eaves drop for a moment or two on my encounter with this parable having heard others encounter it before me – then later when you’ve space, read the Jesus version again, and encounter it for yourself.

Here’s a story that goes against my urge to be effective and efficient – all that wasted seed.  Wasted good seed, the potential is always there, but it is scattered in all directions and thwarted by things outside its purpose.  Should we be wasting more?  Our service, our stewardship, our worship, scattered further.

Here’s a story that says take the risk that you may fail.  This wasting is part of a creative process.  There is a reckless throwing about of God’s’ word in this story.  Some business guru has recently written,  “If you aren’t making mistakes you aren’t doing anything worth a damn.”  Perhaps that fits perfectly the challenge of this parable.  The sower doesn’t reap from everything that has been sown.  Didn’t Jesus send out the disciples with the injunction “You received without payment; give without payment.”  In other words give as a gift just as you have received as a gift.  Don’t be stingy.  Some things are worth doing inefficiently or ineffectively or wastefully in spreading the good news of God’s rule.

Shouldn’t this parable be called the Stupid Farmer – all the silly places he throws the seed!  And of course, if anyone is a fool in the story, it is God.  He’s the reckless, wasteful one.  He’s the one who tells us to speak, to go to every nation, to cover the world with the Word.  And he doesn’t seem to care whether anyone is listening or not.  God says “Preach” and the command is unconditional.  When Moses said he was troubled at the thought because he wasn’t given to public speaking, God interrupted him and said “Speak.”  When Ezekiel reminded God that a field of dry bones isn’t exactly a responsive congregation, God said “Preach.”  Don’t be discouraged, don’t be calculating, just get on with it.

There will be a harvest.  No idle dream.  Someday it will be.  The parable is a challenge and a reassurance.  Just like that great statue – how much in life is ugly?  How often does humankind fail its own ideals of beauty and love – let alone God’s – but the heart of a sculptor centuries ago who had something to say of beauty, still communicates, still addresses, still lifts our spirits and our souls.  So how much more the grace of a God – who foolishly lavishes his love on us and trusts us to live it in word and action.

Let those who have ears to hear, hear.  Jesus the Parabler speaks to you.