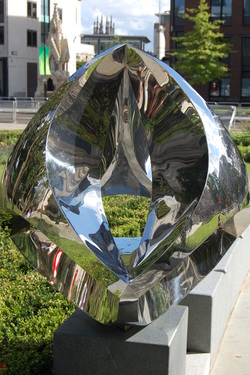 “Was Jesus a Christian?”  The woman’s question headed a list of some ninety others, but that one short enquiry disclosed both the truth of her  assertion that she knew nothing about Christianity, and how overbearing we Christians can be.

“Was Jesus a Christian?”  No, he most certainly wasn’t!  He was born a Jew, brought up as a Jew, lived his whole life as Jew, and died a Jew. To try to separate Jesus from his Jewishness is as nonsensical as separating a leopard from its spots. Jesus was no Christian.  All of his followers and all who followed them were Jews as well; within a generation or two that changed.

With much squabbling and hostility the Christian movement eventually came to the conclusion that people who weren’t Jews could become  Christians.  Imagine the furore  this caused – churches split; there were rows and betrayals, no doubt; families were divided.  There are no reasons to think that the acrimony, bitterness, and sordid confrontations we know in current disputes, were any less disturbing for those involved then.  The Jewish Christians were destined to die out completely and we all know what fierceness the threat of demise can prompt.  A community with its back against the  wall is all the more vicious. That’s the background against which we should hear our reading from Mark’s gospel.

At different times during my years as an ordained priest of the Church of England, the most intense hostility I have received has been  from people who used to be members of the Church of England but have now joined another church or another faith tradition.  I remember one ex-Anglican refusing to be present at a service in his church if I remained within the building.  Likewise the most aggressive atheists I’ve encountered have been those who used to Christian believers.
Conversion can make you particularly confrontational towards what you have been converted from.

And that is how I think we should receive Mark’s comments on the Pharisees.  They were a renewal movement within the Jewish faith.  Their concern and devotion was one of the things that kept the Jewish faith going in hard times.  I suspect that many of those attracted to the teachings of Jesus were the same people as those who took inspiration from the determination and faith of the Pharisee movement.  But when the Jewish-Christian split came, potential or actual allies soon became archenemies – each side refusing to acknowledge anything worthwhile in the tradition of the  other.

No, Jesus’ criticisms aren’t directed at Pharisees as such, but to all of us who are tempted to turn faith into ideology, worship into personal wish fulfilment.  Jesus cuts through all the self-justification, all the excuses, all the rancorous  maintenance of what we like to call ‘standards’ and our clinging to figments of our own imagining.  It’s really all about the heart, says Jesus; about those feelings and thoughts that are at the very centre of our being as a person.  As someone put it, ‘It’s not so much you are what you eat,’ as ‘what’s eating you?’


Those things that are social virtues – like kindness, forgiveness and patience – become as though second nature to those who are in a right relationship with God and others. ‘We love because God first loved us,’ wrote Saint John.  Knowing that love at the core of our being we have no need for fear and the aggression that goes with it. ‘Perfect love casts out fear,’ as Saint John realised. Knowing that love for ourselves lets that love flow to others. It comes easily to us, or if not easily, the will to let it flow is a prior and effective commitment. If, however, that love and trust is replaced by a fearful sense of rejection or its threat, then those social virtues become a chore, or worse.

In one of the great novels of Dostoyevsky, The Brothers Karamazov, a story makes the point well: a stingy old woman who finds herself after she had died in the misery of hell seeks to be raised to the comforts and joys of heaven. ‘I wasn’t all that bad!’ she shouts at a passing angel. ‘What about that time when a poor beggar came to my door and I gave him an
onion?’

The angel hovers near the old woman and together they look back on that scene from the woman’s life. The woman had come resentfully come to the back door of her great mansion in order to see the beggar off as she shouted about
the filthiness of his hands and face. ‘You don’t even wash before you come begging,’ she remonstrated. Nevertheless, in the bottom of her larder she found a half-rotten onion, which she handed to the beggar.

‘Well,’ says the angel, ‘that should be enough to open heaven to you.’ And the angel lowers a rope to the woman with the self-same onion tied to it. The woman grabs the rope, but as it is being raised others in the hellish lake of fire grab on as well, hoping to be pulled out with her. Alarmed at this, the woman yells, ‘Let go! Let go! It’s not you who are being pulled out, it’s me. It’s not you onion, it’s mine.’ And just as she says, ‘It’s mine,’the onion slides off the rope and so does she. As onion and woman fall back into the lake of fire, the angel weeps and flies away.

If only she had had it in her heart to say, ‘The onion is ours,’ surely onion and rope would have been strong enough to pull them all out together. That I think echoes the words of Jesus in today’s gospel reading. It is what is in our hearts, in the very core of our being, which moves our actions and compassion. It is as simple, and as disarming as that. When the Spirit of God’s love is at the centre of our very selves, acting out of that centre will be second nature to us. Saint Augustine famously said, ‘Love God, and do as you please.’ I think what he meant was that when we acknowledge God’s love as the
centre of our very selves, then what pleases us will undoubtedly please God.

The whole apparatus of Christian devotion – this sacred place, our music, the Book of Common Prayer, the Eucharist, private prayer, hymns, - all that and all the rest, is about just one thing, our hearts before God.  If what we do here doesn’t help us gain a new heart, it’s not worth a fig. In the words of scripture, we are seeking God’s action to place within us hearts of flesh not of stone – hearts compassionate not selfish, large not small, hospitable not judgemental, tender not hard.  Does worship contribute to living, healthy, compassionate hearts, or does it not? That’s Jesus’ stark question arising from those who made tradition and rules the be all and end all of their religion.

Like some of the contemporaries of Jesus, we are easily mired in traditionalism when our spiritual inheritance is not used to open our hearts to become more compassionate. This is the dead faith of the living. But when we use the spiritual
inheritance left to us by preceding generations for its true purpose, then tradition lives and flows and opens us to greater life.  Our hearts become larger; more compassionate.  This is the living faith of the dead, or, rather the living faith of
those who have died and live forever because their hearts have come to resemble the heart of God.

To quote an all too familiar expression:‘Simples!’ Simply gladden the hearts of others because you know the gladdening of your own heart. Overcome what defiles and hurts by living from the heart –the heart of God’s love. Simples.