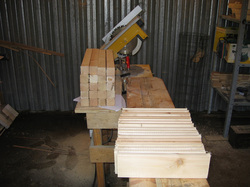 They say lightening never strikes twice.  John Rogers knew better.  Everyone said how amazingly he had coped with redundancy.  It is no easy task to begin again, aged 55, after a lifetime working for the same company.  With a lightness of heart he sank all his redundancy money into his new enterprise.  If his wife thought it foolhardy, she didn’t say so.  Just a few said, “What an idiot to blow it all, he’ll be bankrupt in a year;” though never to his face.

He rented a unit at the new Craft Park; one of those out of town shopping sites with a large car park, a café, and a play area for the kids.  The unit was really an elaborate shed, one of about thirty on the sight.  Equipping it with tools, buying in wood, and creating a display and sales area took all his cash, but it didn’t matter.  What was important was that he could now make things.  His speciality: wooden toys.  Sometimes very traditional things—rocking horses, the grain of the wood dictated the racing shape of the animal.  Sometimes new things that seemed strange as wooden toys—alien space creatures that came apart, and docking satellite stations with flashing lights.

The business advice woman at the bank said his margins weren’t large enough.  He was covering his costs and making enough to live on - just, but he’d never be able to expand, and if supplies and sales got too out of kilter he’d have cash flow problems.  He nodded and made some encouraging noises, but in his heart he didn’t care.  He was making things.  He was happy, perhaps the happiest he’d been in his whole life.

The arson attack was so mindless.  A teenager fooling about, oblivious to just how paint, and wood, and varnish, would blaze.  He was a lad newly come to the area, in a foster home to prepare him for life on his own.  John knew nothing of him.  He was pleased that the magistrate thought the matter so serious; pleased that the sullen youth got a custodial sentence.  But that didn’t make up for what he’d lost; somehow all his motivation had gone up in flames.

The insurance company paid out.  The site manager was efficient in the rebuilding of the unit.  Customers urged him on.  But as the smell of the burning lingered about the place, so did the dead weight of John’s wounding.  It was as if the fire had burnt from him all the enjoyment he’d once had.  He was a victim, and he couldn’t shake it off.

And sure enough the business began to fail.  His toys didn’t have the same originality about them anymore.  The first Christmas after the fire John just got-by.  The second Christmas was a disaster.  “It’ll not survive,” they said, “It was obvious from the first that it wasn’t a sensible thing to do with his redundancy money.”

The last thing people expected was that he would take on staff: a young fella called Andy with a beard and a pony tail, a ring in his nose and in one of his ears.  No one knew where John found him.  It was all so unlikely; another indication that John had really lost it.

How surprised the scoffers were when the business started to turn around.  Andy had a talent for working wood, and John was soon able to build on it.  Teaching Andy rekindled his enthusiasm.  For the first time for two years he had ideas for new toys.

And Andy brought something new to the business as well.  Computers were his thing.  Before joining John he’d been on an intensive course and he put his learning to good use.  When their work featured in a Sunday supplement orders started to come thick and fast.  They started selling from their own website.  The woman at the bank was impressed.  “The business has turned a corner,” she said.  When people asked John, “Are you thinking of retiring?”  “Never,” was the reply.

But lightening can strike twice.  The lad who broke into the workshop was after the computer.  Why then did he smash the rest of the place up?  Wrecking the stock, smashing the lathe, throwing customer files everywhere, and pouring varnish over the lot.  The police seemed to know who he was, but there wasn’t enough proof to arrest him.  “We’ll start again.  There’s nothing here that a few weeks’ effort won’t put to rights.”  But John’s optimism found no echo in Andy.  The younger man burned with anger.

John had no idea how Andy knew who the suspect was.  He had no idea either of the revenge he intended.  It wasn’t until the police came to tell him that Andy was charged and in the cells that he knew anything was going on.  Andy had followed the suspect to a local pub, cornered him in the toilets, and beaten him until an arm and a nose were broken.

Minutes after the police left, John put the notice on the door.  It simply said, “Closed Down.”  With a heavy heart he turned off the lights, and locked his workshop for the last time.

A few days later the site manager came to see him.  “Don’t you realise how much money you’re going to lose giving up the lease without notice?  The business has got such prospects, why end it now?  You recovered after the fire, you can recover now.”  And sensing the real cause of John’s hurt, he added, “Surely the court will take into account why Andy did it?  They’ll be lenient on him.  After all it was his first offence.”

“No, not his first,” said John, “he’s already served time for arson.”

Jesus ended his story, “The Lord was angry. So he handed his servant over to the courts until he had paid all his debt.”  And he added, “So will my heavenly Father do with you unless each of you sincerely forgives those who wrong you.”