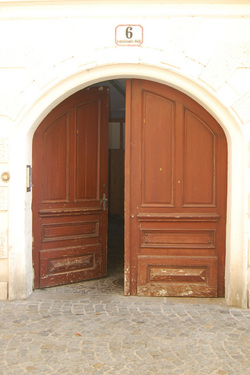 Love bade me welcome
Proper 22C
Luke 17.5-10
I just love the Dilbert cartoon strips by Scott Adams. They are one of that
very select company of cartoons that have achieved ‘classic’ status by their satirical and witty take on life. They feature the office workers Dilbert, Alice and Wally and the rather thankless tasks they are frequently occupied with. One of the strips seems to speak directly to today’s gospel reading:

The annual appraisal interview is due and Alice waits for it in the office of the pointy-haired boss. The boss begins, ‘Alice, your performance this year is “meets expectations.” You get a two percent pay increase.’


Defending what she has achieved, Alice stands up and imploringly holds her hand up, saying, ‘I earned three patents this year! The company will make millions!!’ The boss says, ‘Really? Wow. ....I mean ... I expected that too.’

Absolutely beside herself, Alice continues, ‘I donated bone marrow to our biggest customer!!! TWICE!!!’ To which the boss replies, ‘I noted that under “attendance problem.”’

In the last scene, Alice is seen in the lunch room, head buried in her hands. Dilbert says to Alice, ‘I told you the bone marrow thing would haunt you.’ And Wally adds, ‘I'm starting to think the time I worked through my lunch hour was
for nothing.’

Echoes there, or at least so it seems at first sight, of ‘So you also when you have done all that you were ordered to do, say, “We are worthless slaves; we have done only what we ought to have done!”’hese sayings from Jesus are just too near the appraisal comments of the pointy-haired boss for comfort. Do our heartfelt and taxing efforts at discipleship really amount to nothing more than ‘Meets expectations?’

At this time of the year our lectionary readings take us through Luke’s Gospel in order. Hearing the stories and sayings of Jesus he records in this way is rather different from the isolated gobbets we’re used to. Isolated bits, especially the bits we like – the Good Samaritan, the Prodigal Son and the rest – are comforting and reassuring. But when you hear Luke’s book as a continuous account they change their nature – read it as a whole for yourself if you don’t get a sense of the disjunction I’m talking about. Taken as a continuous narrative, Luke’s Gospel is quite disturbing.

My friend Michael Elliott, the only High Church anarchist I’ve ever known, once put it this way:
We need to constantly remind ourselves that the man Jesus was a foreigner, that he spoke a language quite unintelligible to us, followed a life-style few of us would survive, and lived in a culture whose values most of us would reject!

Jesus had just finished telling some stories about people receiving recognition and awards. The parable of the prodigal son tells of a  loose-living ingrate who returns home and receives a feast, including the gift of the fatted calf, much to the annoyance of his brother who has labored hard and constantly on the farm  (Luke 15:11-32). Again in the parable of the
dishonest manager, it is the dishonest manager who is congratulated for being shrewd (Luke 16:1-13). And in the story of the rich man and Lazarus we heard last week, it is the man who lived in shame and dire poverty who gets the
eternal reward of living in the bosom of Father Abraham (Luke 16:19-31).

Let’s be frank with ourselves. These are hard stories to hear when we really think on them. We might imagine the disciples saying to themselves, ‘If loose-living sons, dishonest managers, and beggars get rewards, imagine what  people like us are going to get...’

But then comes the ‘Meets Expectations’ appraisal. Jesus speaks of slaves not getting any commendations because they have merely doing what was expected of them.

This Jesus is hard to fathom. His stories and his teachings are so often not what we expect – indeed not what we can cope with. He seems to turn everything on its head, time and time again. The first will be last; the greatest will be the servant of all; the shameful will be honoured.

No wonder the disciples’ cry was, ‘Increase our faith.’ Their faith wasn’t up to coping with this way of life, they thought. And Jesus’ response?  ‘Faith no bigger than a mustard seed is enough.’ That tiny amount of faith is enough to carry you way beyond what you take to be the sensible or achievable thing. Why with that much faith you could tell a mulberry tree to plant itself in the sea, and it would. And the implication is that it would thrive and fruit in such circumstance!

What are we to make of this? Nonsense, or a riddling way of telling things that's meant to draw something from the hearer? Is he telling them that they truly are inadequate in faith – making fun of them even? Or is he saying that faith isn’t anything about quantity – so get rid of that way of thinking as it’s as nonsensical as a mulberry tree growing in the sea. Evidently Jesus has great expectations of the disciples, so is this about shaming them (and us) about not rising to meet those expectations?

Surely the stories of undeserving people being given recognition and honours are telling us that the Kingdom of God simply isn’t about rewards and merit? These things are our great expectations but not God’s. With God all is grace, thank God. It is not up to us to meet God’s expectations. We could never do it;  but grace is all. God’s love comes as an absolute gift, not a reward. So the words about worthless slaves aren’t a Dilbert-like appraisal, no, they are about the absolute
gratuitousness of faith – it comes as a gift, it has nothing to do with our merits.

Yes, Jesus is the one who says, ‘Come here at once and take your place at the table.’ Forget about the expectations you think sensible. Forget about what society expects – the servant must serve; the honour must be worked for; the
expectations of the order must be fulfilled. Don’t think like that about God.

Brothers and sisters in Christ we are invited to the table. No expectation, just invitation. Rejoice in that.

Love bade me welcome; yet my soul drew back,
Guilty of dust and sin.
…  …
‘You must sit down’, says Love, ‘and taste my meat.’
So I did sit and eat.
George Herbert