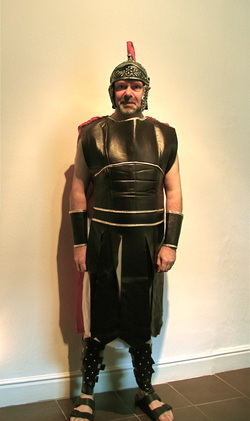 The North Sea is often bleak and always cold. It has  about it an awesome wildness and ferocity that constantly reminds you that it can’t be tamed or controlled. It’s tough, relentless and brooding – beautiful in  its own way, but scary too. Its character seems to stamp itself on the  countryside whose shores it batters. The beaches of the north-east cost of England, for example, are wonderfully wide and sandy but they are not the playgrounds that the beaches of warmer seas become. Along that coast lies the tiny island of Lindisfarne. It is rather barren and windswept, a land of course grasses and no trees. There is a small village on the island, but not a lot to physically attract the visitor. Yet people flock to this place– to the memorial of Saint Aidan and the rocky islet where Saint Cuthbert meditated. They come in their thousands to the ruins of the Abbey and the place where the great Celtic missionaries of the church had their home. Many get to the island by walking across the Pilgrims Way – the risky tidal path across the shifting sands. The
question has to be ‘Why do so many make this journey?’


Surely it is because the very ground of the island has about it an almost tangible authority. Most who come feel a kind of compulsion about the place – a sense of reverence and wonder. A lot has been left behind –
not in buildings or memorials – but in the very atmosphere of the place. This isn’t about artistic merit; the wonders of Saint Paul’s Cathedral or the  Vatican. In those terms Lindisfarne is unremarkable – as impressive as it is, the Abbey is, after all, another medieval ruin. There is something more on Lindisfarne and it is this: that worship, and the mission that flowed from it, somehow ‘validates’ the place. You can sense it. You can almost breathe it in.
Those words by T.S. Eliot come to mind:

‘If you came this way
Taking any route, starting from
anywhere
At any time or at any season
It would always be the same: you
would have to put off
Sense and notion. You are not here to verify
Instruct yourself, or inform curiosity
Or carry report. You are here to
kneel
Where prayer has been valid.’

The authority of the very place touches you heart, mind  and soul.

If we can recognize that quality in a place, we can also recognize it in a person. And that is precisely what the centurion did. He recognized Jesus’ intrinsic authority. It all too easy to believe that everyone who met Jesus did – but they didn’t, the Gospel writers make it plain that some thought Jesus mad, others wouldn’t give him the time of day, and others still
condemned him as a troublemaker. But the centurion, he saw in Jesus the power to command and the respect due to an authority that he could sense. And the acknowledgement of that authority is how things change for the  better.

Remarkably this centurion is liked and respected by the local Jewish leadership. They intervene on his behalf. ‘He is worthy of having  you do this for him,’ they say. Their concern isn’t the ill slave, but the Roman soldier. And they are thinking in terms of merit and worthiness – he has done us favours and so we think he is worthy of this favour in return. But the centurion  himself has a different attitude, ‘I am not worthy’ is his estimation. There is no moral arm-twisting in this. No claims or demands, just profound trust in the compassion, the kindness, and the authority of Jesus.

That’s what this kind of recognition does. It is self-authenticating in that its openness and quality is available for all to
see, to sense, to feel – even if the words to describe just what’s going on are hard to find. When you see this quality of faith and living, you simply recognize it. I’m reminded of a nun called Patricia I knew years ago. She radiated that authority, that reverence that I see in this centurion. I first understood it when I saw the effect Sister Patricia had on small children – they  were drawn to her as if by invisible chords and she had an immediate quieting and reassurance effect on those fretful or crying – and that despite her strange garb of a full black and white nun’s habit. Her reverence and patent
trustworthiness had an attraction about it that even those too young to have any words to describe it could still recognize it.

Do you see what’s going on in the centurion’s encounter with Jesus? His recognition of Jesus isn’t validated in the healing of the slave. No, it’s validated long before we know the slave is well. It’s all too easy to fall prey to a rather juvenile bargaining in our relationship with God. You know, ‘Give me what I want and then I’ll believe in you.’ As if faith gains
us special favours. But that’s not what the centurion does. His recognition of Jesus’ authority is enough for him. Closeness to Jesus is enough for him. Whatever Jesus directs, will be.  That is enough for him. And Jesus responds, ‘I tell you, not even in Israel have I found such faith.’

Sure enough, the centurion uses his military experience to understand what’s possible in this encounter. ‘I say to one “Go,” and he goes, and to another, “Come,” and he comes.’ Sure he has past experience of what he has learnt of the Jewish faith to encourage him – ‘he loves our people’ say the elders. And sure he is a person obviously given to a philanthropic outlook on life. We are told that he provided the resources for the building of the synagogue at Capernaum. This is a person who uses his experience but also rises above it. He is not subject to the prejudices of his day. He rises above anti-Jewish feeling; he is willing to acknowledge things his fellow army officers would have thought ridiculous or
even degrading. He knows, instinctively it seems, that only Jesus can provide the well-being his much valued slave needs so desperately. And he lets that appreciation of the situation shine through what he does and how he responds to
Jesus.

He is a foreigner in a society in which foreigners were regarded was suspicion or hostility. He is part of the occupying military force – loathed by most of the people who squirm under that forces’ brutality and the tax demands it makes of them. Yet he rises above these things, and Jesus is able to say of him, ‘Not even in Israel have I found such faith.’ He responds to Jesus in humble recognition – even from a distance. The very ground is holy because of Jesus and the centurion needs no further confirmation.

Could it be that the Gospel writer is saying to us, ‘Take heed of what this foreigner does. Your faith, your trust, your reliance on God could be as his is, and it will be all the better for that.’ Perhaps the unexpected faith of ‘the foreigner’ is one of God’s gifts to the church? Those who recognize the holy places, the holy encounters, and trust themselves to that
recognition may have much to teach those of us who are more calculating in our estimations. We are too easily tempted towards the thinking of the elders in the story – expecting God to acknowledge merit, and basing our faith on that – ‘he
is worthy.’ Simply relying on grace, as did the centurion, is more to the point and altogether more productive.

Perhaps our first question should be ‘who are the foreigners?’  They won’t necessarily be literally foreigners (though they may be) but they will be those whom we have chosen to make foreign to our ways of doing things, seeing things – the ones who actions we’ve usually ignored, the ones whose voices are seldom heard, the ones whose opinions are generally overlooked, the ones who are quietly moved by the holiness of God although we’ve failed to notice it.

The centurion argued from his own remarkable experience of God and consequently trusted Jesus. His attitude to life and faith was clearly rooted in those experiences, but it wasn’t constrained by them. He reached out in confidence and his confidence was blessed.

‘If you came this way
Taking any route, starting from
anywhere
At any time or at any season
It would always be the same: you
would have to put off
Sense and notion. You are not here to verify
Instruct yourself, or inform curiosity
Or carry report. You are here to
kneel
Where prayer has been valid.’