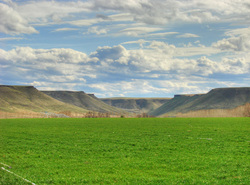 The mist rolls down the valley, but it will soon evaporate as the
sunshine grows in intensity. You are standing on one of the ridges of the  rolling countryside. Before you five different lines of further ridges undulate in blue-grey form. You then become aware that your eyes are playing tricks on you. What appear to be the outlines of further rolling hills, aren’t.  The land horizon isn’t the last line at all. The last line is cloud or mist – yet light, form, and distance have conspired to make that line appear to be as solid and fixed as the lines in front of it. You blink, realizing that the land form in front of you isn’t what you thought it originally to be. It’s not always clear just where land ends. The
horizon of vision doesn’t always correspond to the to the land or sea horizon. Sometimes our seeing fools us. The horizon isn’t always obvious.

There is a union of belonging and fellowship that stretches beyond time – beyond usual human horizons, if you like. There’s a ‘oneness’ for the Jesus people that’s out of this world – and that’s meant quite literally, for the  usual world way of thinking just doesn’t get: ‘the world does not know you’ (v.25) – doesn’t know the Father’s action in bringing into existence this different kind of belonging. The glory of the Son is something born of eternity – it is beyond our horizons – literally ‘before the foundation of the world.’ (v.24)

Jesus draws his people into this new community that is beyond anything  experienced in everyday categories – ‘that they may all be one.’(v.21)  How can this be? How can the Jesus people be one beyond all boundaries of time and location?
It’s all bound up in the quality of the relationship between the Father and the Son, and the way that is shared.
Be one with God through the love God frees gives: ‘These know that you have sent me. I made your name known to them, and I will make it known, so that the love with which you have loved me may be in them, and I in them.’ (v.26) A new
horizon indeed!

Hearing Jesus pray in these words in John’s Gospel, we hear him pray for us. Our horizon has changed. We are incorporated into a community that’s out of this world. We are freed to live a new way of being and doing – a new quality
of existence that’s truly remarkable; truly unique; truly all-embracing. We are incorporated into divine experience – all these wordy descriptions have double meanings – experience the very divinity of God and find all experience divine. Wonderful!  That’s life in all its fullness.  But it is not something to keep to yourself, and so Jesus prays: ‘As you, Father, are in me and I am in you, may they also be in us, so that the world may believe that you have sent me.’ (v.21) This new horizon – this new quality of life – is something  purposeful not only for ourselves, but also for that very world that does not know it –for those whose horizons are limited; constrained by what is.

First, imagine a hall full of, perhaps, 300 children. The eldest is 10 years old, the youngest 4 years. They’ve been playing games, doing quizzes, making models, and the like. Then the evangelist stands up and says, ‘When I was young I had a foul mouth. I was always oathing and swearing; I didn’t give a cuss about anyone or anything. I stole things from shops. I was always getting into fights and wrecking things. I did anything I wanted to and yet I still wasn’t happy. Then the Lord Jesus came into my life, and I’ve never looked back. You too have foul mouths; you’re always doing things wrong; you need to let the Lord Jesus into your life.’

And I wondered what sense did this testimony make to an audience of mostly 5 and 6 year olds? The young evangelist spoke in sincerity of what had actually happened to him. Yes, he had been transformed; changed beyond all recognition from his previous self. His words were authentic to ‘the touch,’but came across as an adult haranguing very young
children.

Second, imagine a mass public campaign about unemployment. It brought together an alliance of all kinds of organisations – political parties, pressure groups, labour unions, social care agencies, and more. There at the head of the crowd was a bishop, and the campaigners were pleased to receive much assistance from local churches as they moved about – places to sleep, meals provided, gathering places freely given. What struck me about all this was how surprised many of the journalists following the campaign were. They wondered why churches would involve themselves. Time and again they expressed incredulity that what they considered clubs for the religiously inclined should have a concern for such a public issue.

A similar surprise has been expressed this week in stories about Pope Francis’ efforts to revive the process towards declaring Oscar Romero a saint. Romero was gunned down while leading worship in 1980 because of his defence of
El Salvador’s poor and his denouncing of government violence. In recent years his cause has languished because of fears of an over politicized liberation theology. Suddenly these issues have been brought centre stage.  A risky assertion of a preference for the poor, say some.

Truths made tangible through personal transformation or social involvement. Both can be misconstrued. Both are efforts towards a word that others may hear. Both can be risky and lay us open to criticism.

Like Paul and Silas, we may find that intervention to change an individual’s life for the better isn’t necessarily welcomed. The slave-girl was deranged and others abused her peculiarities to make a profit. Her strange sensitivity made her able to recognize Paul’s actions for what they really were, but her owners weren’t prepared to take a financial hit as a consequence. Using the judicial system to their best advantage, they made sure the two Christians were brutalised and imprisoned. Sharing the word may bring painful consequences.

But did you notice the strange thing about Paul and Silas’behaviour in prison. They’ve been denounced, cruelly beaten, shackled in the stocks, and locked in the deepest prison, yet they sing. The horizon of their physical action entirely constrained but their spiritual horizon is as wide and as open as it has ever been. Are these men mad or what? We might imagine the jailer’s judgement on that!  How soon, however, was he to see things differently.

When the earthquake freed the prisoners, the jailer quickly realized his own plight. Roman law required that a jailer who lost his prisoner must suffer the penalty the prisoner would have suffered. He wasn’t going to wait the inevitable verdict of others, so he took his sword ready to run himself through. Paul’s shout stopped him. In an instant he realised there was something remarkable and he turns to Paul’s Lord in faith and trust. And lest we should think this change of heart a momentary thing only – the jailer sets about works of mercy and bathes the wounds of the two and makes sure they are fed. His whole household are baptized. The horizon has changed for them.

What I take from these stories is their particularities – Paul and Silas respond to circumstance, they intervene as only they can, they face trouble as a consequence, but they keep in view the Gospel hope. The slave-girl, the jailer, the jailer’s household all benefit from their determination. The slave owners and the judiciary view things rather differently – the word of life provokes reaction negative as well as positive.


The truth is made tangible in Paul and Silas’ actions and words. They live the oneness Christ offers. They are part of the Jesus people – as is obvious to all who see and hear them. The horizon of God is the only boundary of their community. Nothing less is asked of us. And nothing less is promised us.