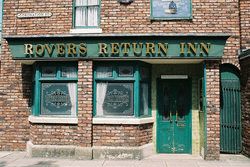 Mandy's determined to be a good mum to Bobby (who would have thought it?).  Bianca - what else would you expect? - paints a picture of a life of drudgery, but Mandy is determined to do things differently and asks Ian for a car. Lucy is miffed when Ian agrees without question. Mandy worries she can't carry off being a mum when Bobby plays up. Mandy happily tells Ian she's ready to be Mrs  Beale.

Bianca asks Kim to watch Morgan when she gets her job back in the cafe. Kim  takes Morgan into the Vic and bumps into Ray with his daughter Sasha. Ray  introduces Morgan to Sasha. Bianca's furious when she finds out as she doesn't want her kids confused any further.
What a family!

As  Anne, Sally and Frank head off for a celebratory drink, convinced the jury will take Frank's side now they've exposed Carla and Peter's lies, a devastated Leanne pours her heart out to Stella.

Leanne reveals to a shocked Stella it was Carla who really ran her over. Meanwhile, Peter tracks Leanne down and tells her he's sorry. Leanne's in bits as it dawns on her how many times Peter's lied to her when he was with Carla. But as she calms down will she consider salvaging their marriage? Leanne suggests that in time perhaps she can forgive him and Peter insists he does love Leanne... but he's also in love with Carla!

With the future of his family at stake and a devastated Simon to think of, will Peter accept Leanne's forgiveness or walk away?

Edna has just about had it with her daughter’s husband.  When Rachel first got married the prospects seemed so good, but now – it’s all in tatters.  After Edna’s husband died and she could no longer cope on her own, she was relieved to move in with them.  His business was going well.  He said he could look after her as well as Rachel, and was glad to  share what he had.  What a gem.  A big-hearted man; ready and willing to extend his promises to Rachel to include caring for her mum.  It was  hard to believe that could collapse so soon, and the business too.  But that’s the fact of it.  One day all was rosy, and the next day everything is in chaos and they’re not even sure there’ll be food next week.  All because he’s got in with the wrong crowd.  He’d come to idolise this fella who leads this gang of blokes.  With the women hangers-on as well, all
thoughts of home and work seemed to have left him.  Edna is sick with worry and has taken to her bed.

I hope you recognise the  story-lines.  If you go to the Eastenders website to sort out just what’s  happened to the characters over time, you’re offered an ‘event search’ facility that asks you to select birthdays, marriages, love, deaths, fights, or  trauma!  That’s family life soap opera style.  Bianca and her brood  Liam, Morgan, Tiffany, Ian Beale and his unlikely pairing with Mandy, the  Brannings, the Masoods, the Mitchells, the Moons and the rest of them.  The  webs of deceit, disappointment, and dismay.  Relationships fraught with  worry, wrangling, and fretting. About three hundred years before Christ, a  Jewish scholar, Jesus son of Sirach, musing on the things of family wrote this about the anxieties of having a child:

Issues familiar enough in any soap opera.  Of course, the scholar’s worries were particularly about daughters because of the nature of the male-dominated world in which he lived; although absolute loyalty to the kin group, the family, pressed just as hard on men as women.  In the scholar’s world any misbehaviour by one member shamed the entire group – social standing, economic well-being, psychological identity, and religious value, all depended on your place embedded in the kinship group.  Codes of honour - and its opposite, shame – all worked from that belonging.  That was Jesus son of
Sirach’s world, and Jesus of Nazareth’s world too.

All the more remarkable  then that Christ has a healing encounter with a woman in someone else's home.  And that so near to the beginning of Mark's gospel.  The story is only three sentences long but Mark wants us to know that it's of great
significance.

My Gran was a great believer in Tonic Wine - a pick me up, she  called it.  I'm really disappointed that nowadays those who market  Sanatogen have to add the words 'Please note the name "Tonic Wine" does not imply health giving or medicinal properties.'  Well, in my Gran's understanding it did you good, it was a pick me up, and that's just what Jesus is in the
story.  He "took her by the hand and lifted her up."  Jesus, Sanatogen for the soul - the ultimate pick me up. Then it says, the fever gone, she served them.  "Typical men," you might say.  There are at least four men present but the woman who's been so ill is the one who ends up getting the food!

But you'd be wrong to see it like that.  That little verb 'to  serve' - from which we get the word deacon - appears on just two other occasions  in Mark's Gospel:  in chapter 10 where Jesus is teaching his disciples the real nature of discipleship - "for the Son of Man came not to be served but to serve," and towards the end of chapter 15 where the women who witnessed the crucifixion are described as those who had 'served' him in Galilee.  The in-law Jesus heals stands up and serves - that's what true disciples do - Sanatogen has worked on her soul alright!  When Jesus was in the wilderness, Mark tells us he was served by angels - these few verses later he's served by an angel again, this time in the guise of an ordinary woman.  Sanatogen for the soul has turned her into an angel.  Her discipleship begins there and then in her home, amongst her kith and kin, with their troubles, and with their hopes.

What would Mandy's story be like if she'd had such a pick me up?  And what would soul Sanatogen do for Peter and
Leanne?  But then Coronation Street and EastEnders aren't real life, and Mark's Gospel is all about real life.  Did you recognize Edna?  She's not from Emmerdale or Neighbours - she's Simon Peter's mother in law.  Why shouldn't she have been called Edna?  Certainly she had seen her daughter, whether called Rachel or not, taken in marriage by a man who had promised much - home and good business in fishing - who had turned his back on all that to follow a miracle worker from Nazareth.  Where then her hopes and longings for daughter Rachel?  No wonder she took to her bed, sick with fear,
fevered by crushed hopes.  She was sick to death of her son in law.  And she was right, and Simon was as tongue tied as any soap character.  He  didn't have the words to explain it to her.  But when she met Jesus, she found out that Simon was right too.  This is rebirth - the fever, the  pains, the anger, gone.  Sanatogen for the soul.  She will serve her Lord too.  She will be an angel of God:

"I do it all for the sake of the gospel, so that I may share with everyone in its blessings."