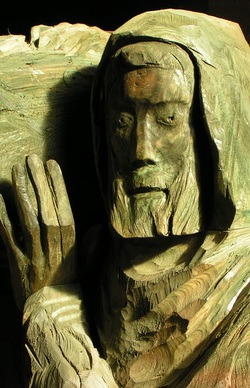 Jesus said, "Whoever serves me must follow me, and where I am, there will my  servant be also." John 12.26

The tears were streaming down his face. I had no idea why he’d asked to see  me. The story didn’t take long to tell. He’d come to tell me what a failure he was as a father. His young adult daughter was on a drugs charge and was about to appear in court. And somehow he felt
responsible. How had he let her down? He had come to tell me he had
failed.

“If only,” she said, and the sentences went on to catalogue all the things
she could have done differently. The break-up of her marriage was a source of immense pain. She was thinking it through. Her rational self
said it takes two to break a marriage as much as make a marriage.  Indeed there were many things he had done to harm the relationship. People told  her she had tried her hardest, and she had. All these things she could see – with her rational mind – yet still the thought haunted her that she’d got it  wrong.

The child sat on the floor rocking herself. The  signs of self inflicted
wounds only too apparent on her skinny flesh. Substance abuse had gone with the wounds. A young life threatening to destroy itself. Why, oh why? Because she was  worthless. Because she thought herself responsible for the terrible things that  had happened in her family. Because she was a non-person. No, you say, that  can’t be – no one is a non-person. But that’s not how it felt to her. She was an  abject failure.

And faith makes it worse. All that talk of responsibility. All that stuff of being accountable. What have you done with your life? All that talk of sin and  failure, of letting down not just yourself, the people you love, your friends  and colleagues, but even God: ‘We acknowledge and bewail (that’s the right word, isn’t it?) our manifold sins and wickedness, which we from time to time most grievously have committed, by thought, word and deed.’  …  … ‘We have left undone those things which we ought to have done, and we have done those things which we ought not to have done, and there is no health in us …’

We tell ourselves things wouldn’t be like this, if we hadn’t got it wrong. But hang on a minute, the apportioning of blame comes to us too easily– we fall prone before the “if onlys” but we might have got it exactly wrong—supposing  we’re not to blame, supposing accident, mishap, chance, ill-fortune, the sheer  complexity of things that confront us, aren’t threats but rather the strands of  thread out of which we can weave the tapestry of life.

Yes, I’m responsible, you’re responsible. There are things wrong, I have made wrong choices—but there’s a limit. I meet too many people who feel themselves failures:

What I’m trying to say is that life is richer than those things with which we  damn ourselves. That all those things that knock—and sometimes knock really hard, don’t have to be our failures. And this is a word of gospel hope.

Did you notice how pre-occupied Jesus is in our Gospel reading. Andrew and  Philip come with a perfectly sensible request but Jesus’ answer goes of in completely a different direction. His mind is full of his impending hurt and  death – you might call him fixated – and who can blame him. Like the people whose stories I began with, his whole horizon is dominated by this thing, or so it first seems. And he says, ‘What am I to say, Father save me from this hour?’ Yes, he is tempted to the “if onlys.” If only I’d done it differently, if only I had made a different choice, if only circumstances had been different. He is tempted, but he doesn’t go that route.

No in my dying, in my suffering, something else is going to be born, something that is of life, life in a richness that is beyond your dreams. Forget the “if onlys,” instead take what comes and turn it, transfigure it, re-order it, make of it something. How can a cross be glorified?  Yet it will  be.

Perhaps Jesus does answer Andrew and Philip’s request after all. ‘Sir, we wish to see Jesus.’ ‘When I am lifted up,’ says Jesus, ‘I will draw all people to myself.’  Then they will be able to see Jesus alright – Jesus reign from the wooden beams others have determined shall be his end – but they are not. The terror it, the hurt of it, the failure of it – is turned.

‘Where I am, there will my servant be also.’ In the turning, in the taking of the crosses of this world and making them into thrones of love. That’s the seed that bears fruit, that’s the law written in our hearts, that’s the turning that makes of a troubled soul not my personal failure, but the chance of glory because God never leaves us to wallow in the mire of despondency.

Salvation really does mean salvation – that all those blind, hurting dead ends of life can be turned, can be salvaged, can be redeemed. What must die is that old self that locks itself into a circle of failure, harm and hurt. What must be born is that seedling of the eternal self, that knows it is loved by God, always, and everywhere, and forever.

Do you know the story of Sadhu Sundar Singh? He was born a Sikh in 1889 but as a young man converted to Christianity and decided to stay in India to be a missionary and bear witness to Christ. His is a story of extraordinary journeys  and mystical experiences. He travelled widely overseas as well in India, and undertook many hazardous walking expeditions in the highest regions of Tibet. This story comes from one of those expeditions:

One late afternoon when in the Himalayas when he was travelling in the  company of a Buddhist monk, it started to snow. The wind was bitterly cold and  the night was descending quickly. The monk warned that they were in danger of
freezing if they didn’t get to the monastery before darkness fell.

As they crossed over a narrow path above a steep cliff, they heard a cry for help. Deep in the ravine there was a man who had fallen into it and was laying there wounded. His leg shattered there was no way he was going to get himself out of it. The monk warned Sundar Singh, ‘Don’t stop, fate has brought this man to this sorry state. He must work it out by himself. That is our tradition. Let us hurry on before we ourselves perish.’

Sundar Singh replied, ‘It is my tradition that God has brought me here to help my brother. I cannot abandon him.’ The monk went on through the snow, but  Sundar Singh climbed down to where the wounded man was, and, making a sling with
his camping blanket, hoisted him onto his back. Then he began the arduous and painful climb out of the ravine.

Eventually he made it back to the path and struggled on through the increasingly heavy snow. It was dark now, and he found it hard to keep to the path, but he persevered. Near fainting from fatigue he finally saw the lights of the monastery ahead. Then he stumbled and nearly fell. Not from weakness, but because there was something lying across the path. Kneeling on one knee he brushed the snow from the object blocking the path—it was the body of the monk who had frozen to death within sight of the monastery. And there kneeling in the snow he said aloud to himself the scripture: ‘The one who would save his life will lose it and the one who loses his life for my sake will find it.’

Years later, when Sundar Singh had disciples of his own, they asked him this question: ‘Master, what is life’s most difficult task?’ And Sundar Singh replied, ‘To have no burden to carry.’

The burdens of life that scream at us ‘you’ve failed.’ But Jesus offers another way, a way that turns the burden; that makes of every hurt a chance for the new; that brings the power of love to transfigure, to overcome, to restore,
to bring hope.

‘Come to me, all you that are weary and are carrying heavy burdens and I will give you rest. Take my yoke upon you, and learn from me, for I am gentle and humble in heart, and you will find rest for your souls.’

Not failures, but faith bearers—those who know the faithfulness of  Christ.