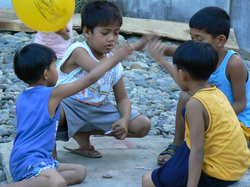 Do you remember that sinking feeling when your first fist was knocked out with that rhyme, and then the second! ‘A classic simple choosing rhyme’ it’s described as on Google – but there was nothing simple or classic about the feelings it provoked in me aged 8 years. I wanted to be chosen, and I wasn’t. Again and and again I wasn’t. Not chosen. A dismal experience.

Who is in, and who is out? A question that has dominated these last few days here in the UK. A General Election prompts much heart-searching and debate about just that – who’s in, who’s out? But I don’t want to make any comment about national politics. Rather I want to underline again just how important the issue of being chosen is for all of us, all of the time. We are always making distinctions. Who’s in, who’s out, isn’t something we leave behind in our childhood years. No, we see those lines drawn, those boundaries set, again and again. And we feel it profoundly if the line is drawn leaving us on the outside.

And yet – disturbingly – I have to admit that one of the delights of being chosen is the fact that others aren’t. It’s great to feel yourself singled out as chosen, and with that comes the the sense of almost pity for those who haven’t been. The eight year old child might give vent to the feeling: ‘Nah, ne-nah, ne-nah, nah; I’m in the team and you’re not.’ Our older selves wouldn’t dream of saying that out aloud, but we have to admit that the thought lurks. It’s in there, and it eats away at our best intentions, indeed our very souls.

Who’s in, who’s out? The Jewish Christian believers were astounded that the gift of the Holy Spirit had been given to infidel Gentiles. ‘They are out, we are in. It cannot be that God’s gifts are poured out on them. We’re the ones chosen – nah, ne-nah, ne-nah, nah. Peter, you’ve got to be mistaken.’

But then they saw and heard it for themselves: God’s spirit poured out even on the Gentiles. The blessings they had received, the others received also. Who’s in, and who’s out here? The ones we had thought ‘out’ are included ‘in’ by God’s actions.

God includes; God choses in a wide and inclusive way that is an affront to the boundaries we find so conducive. We think ourselves ‘in’ and the consequence of that is our dismissal of others as ‘out’. But God will have none of that. The purpose of his choosing of his people is that other people should know themselves chosen also. You’re all in. Know this disarming truth: God does not exclude. His grace extends to all.

We like the idea that only some people are chosen as long as we are part of that select company. How much energy we put into keeping this separation going. ‘I’m better than you’ finds its expression in so many ways – clothes, cars, education, housing, memberships, to name but a few – all badges of belonging, and all costly, literally or emotionally.The glossy magazines give cars ‘cool ratings’; which supermarket you regularly use says so much about you; only the latest branded goods will do; your team’s strip gear can’t be anything older than what the first eleven wears right now; the latest this, and the most fashionable or prestigious that. All these and more say, ‘Look at me, I’m special, I’m chosen, and I’m not ‘them’ – whoever ‘them’ might be.

We laugh at the effort involved. How many sitcoms have revolved around theworry, striving and determination needed to ‘keep up with the Joneses’ or to ‘keep up appearances’? Hyacinth Bucket,  Victor Meldrew, and Dr Frasier Crane were all so funny precisely because we recognised in their worries and fraught efforts to ‘save face’ something of ourselves. It’s a burden to have to keep up appearances – to have to constantly prove to yourself, as much as to others, that you’re special.

But God’s choosing doesn’t need that striving and constant anxiety. God’s commandments ‘are not burdensome,’ according to 1 John. God’s victory is already assured and he simply shares it with us. We don’t have to prove ourselves as chosen. Rather we must rely on God who chooses for his purposes.

That reliance does mean doing something, but it doesn’t mean relentlessly striving to prove that we’re ‘in’ and not ‘out.’ Instead the doing it requires of us is humble confidence in God and a determination to live his commandments. That means not drawing hard and fast distinctions between ourselves and other people, but rather living as God’s friends in such ways that show his generous, inclusive love towards all. And so Saint John gives us Christ’s words: ‘You did not choose me but I chose you. And I appointed you to go and bear fruit, fruit that will last.’

Friendship always bears fruit, that’s its very nature. Friendship is tangible, it has an obviousness about it that all can see. And friendship is always a thing of choosing – friendships are relationships you choose not ones you are born into.

Olive had a great capacity for friendship. A whole group of us came to rely on her generous spirit, her openheartedness, her humour, and her direct and obvious faith. She drew us out of ourselves, increased our confidence, and empowered our faith. One day she complained of a violent headache – and within a few weeks an aggressive brain tumour killed her. We, her friends and her family grieved over her loss. She had so much to give but not the time to shape her gift. We didn’t know how to respond but we wanted to do something tangible. So we clubbed together and bought an oak bench in her memory to overlook the college lawn where we’d share all too brief good times. This all happened years ago.

The last time we visited our former college we were disappointed to find the oak bench long gone. Nothing now in that place marked the gifts of faith she had given so many. We were crestfallen. No one could say what had happened to the plaque that formerly marked the bench. Where now the memorial to Olive. But then the thought hit home that the little group of us standing on the lawn were ourselves the memorial of what her living as God’s friend meant.

Who’s in, who’s out? Humanity’s anxious questions. And God’s reply: ‘You’re all chosen, for the lines of separation that are so important to you, are as nothing to me. And my choosing lasts forever.’