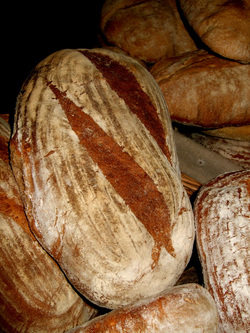 This brief homily uses products from the harvest display to interprete the 'bread of life' discourse.

[Examine the food in the harvest display, and discuss its  origins.] Nearly a third of primary school children in the UK think that cheese  comes from plants; one in ten secondary school children believe that tomatoes  grow underground; and one in five primary school children say that fish fingers  are made of chicken. These figures come from a survey conducted by the British Nutrition Foundation published in June 2013. [Pick a packet of pasta out of the display.] Now before we get too indignant about that we have to remember that it wasn’t so long ago that many adults were convinced by a spoof TV report about the pasta harvest in Italy – trees festooned with spaghetti convinced many that it grows on trees. It’s all too easy to be so distanced from our daily food that we can no longer appreciate where it comes from.

Those who followed Jesus to the other side of the lake  wanted to know where he came from. Many of them had been fed by Jesus out in the hills the day before. That feeding had been so remarkable that more than knowing where the food came from, they wanted to know where the one who had made the meal possible came from. As far as they knew the only person with food that day had been a boy with some barley loaves and a couple of small fish – yet everybody had eaten. Who could make such a thing possible? Where does this Jesus come from? Who is he really?

First, they had to learn the difference between what perishes and what lasts. Those school children surveyed might have been hazy about where some of their food came from but I’m sure every one of them knew about ‘best before’ and ‘use by dates’ – if they are anything like my children, anyway: ‘I can’t eat that it’s out of date.’ Look at this tin of sweets – I’m
sure it’s got a best before date on it. [Ask someone to read the date – ‘Jan 2009’ – then ask who wants one.] Food doesn’t last – it perishes. Learn what you can feed on that that really lasts, he says. The picnic in the hills was yesterday; it’s over. But what I give you will never be over. Look to what God offers because that doesn’t go off; look to what God is offering through me. Learn the difference between what perishes and what lasts.

Second, learn where to put your trust, says Jesus. And  they think that means they have to work for it, whatever it is that will feed them forever. And the story that comes to their minds is that of Moses. Centuries before he had led their forebears out of slavery under Pharaoh to freedom in a new land. But the journey to freedom had been full of problems.
Time and again the people rebelled, got impatient, and did terrible things. They had to work at keeping with God because it came hard to them. Nevertheless God remained faithful and through many setbacks Moses led them on. At one point
they were close to starving and Moses directed them to a miraculous food – manna– that kept them going. They had been fed in a desert place – just like  yesterday’s picnic. Yes, they said, Moses gave our forebears heavenly bread to keep them going – are you going to do the same for us?

‘You’ve got that wrong,’ says Jesus, it wasn’t Moses that gave you manna – it was God, and God still wants to give you the very bread of life. [Pick something from the display that could be a gift, like a box of chocolates] ‘Give you’ is the vital thought – they think this is something they can earn, something they can work for – but NO it’s a gift – ‘the bread that
comes down from heaven and gives life to the world.’ Put your trust not in Moses, but in me.

Know the difference between what perishes and what lasts; know in whom to put your trust; and thirdly:

Know what’s genuine. [Ask for some examples of favourite foods. Pick a suitable one and say you happen to have made it and it’s on this salver you prepared earlier. Remove the lid with great pomp to reveal something very bland like a puffed rice cracker] No matter how hard I insist this is ... ... you’re never going to accept it as genuine. So often our food isn’t what it at first appears to be – the beef potato snack that’s never been near a cow, the New York cheesecake that’s never seen New York, the ‘Italian’ ice cream that’s made in Gloucester. This box of chocolates [again from the display] says it
contains Banoffee Pie, Key Lime Pie, Crème Brûée, and Hazelnut Torte – it doesn’t, they’re just chocolates that taste-like those deserts.

Know that God’s genuine gift of himself is Jesus – he’s the real thing, put your trust in him – he is the very bread of life. Every single day he feeds us with himself – his word, his way, his companionship. Believe on him.