Bit Parts
Presentation of Christ in the Temple (transferred to 4th of Epiphany)
Luke 2.22-40 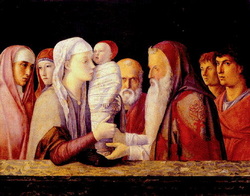 What is the film “The Blue Lamp” famous for?  Directed by Basil Deardon
1949.  Spawned George Dixon of Dock Green fame - the perfect, friendly,
approachable, down to earth copper.  He got shot dead in the film, but that  didn’t stop the BBC resurrecting him for their long-running police series.   Or perhaps you remember it for the young copper George Dixon had taken under his wing, played by Jimmy Hanley - who? the younger ones will be thinking.  Or  perhaps you remember the film because it was a major move for the star who  played the young delinquent who killed Dixon, one Dirk Bogarde.  There’s  something else about the “The Blue Lamp.”  It was the first film part for  Beryl Reid - a cockney housewife, all “gawd blimeys” and “I ain’t a clue gov.”  One of our great post war character actors had her first break in The Blue Lamp.

Nobody remembered that, I bet.  I didn’t either, but I happened to hear  the fact on the radio as I was out visiting in the week.  Beryl only had a  bit part - who’d remember it.  The thing that makes those comedy snips  programmes so funny is that we don’t remember how aweful someone who became  famous and acclaimed was in their earliest bit parts.  The terrible ads  Ronald Reagan did as a young man.  The pin ups Jennifer Anniston posed for  when she couldn’t get work as an actor - a new meaning to “Go on, wash the body  in!”  Or the gawpy and obviously inexperienced young David Attenborough in  front of the camera.  But does it matter when you’re famous - who remembers the bit players?

Two of the bit players figure large in our considerations today, as we celebrate the close of the season of the nativity - Simeon and Anna, just bit  players, only walk on parts, but we remember them, the church has remembered them all across the almost 2000 years in which Luke’s gospel has been read.

According to the law of Moses, the OT law, (Lev 12:2-8), a woman who gave  birth to a boy was unable for forty days to touch anything sacred or to enter the temple area because of her legal impurity. At the end of this period she was
required to offer a year-old lamb as a burnt offering and a turtledove or young pigeon as an expiation of sin. Anyone who couldn't afford a lamb offered instead two turtledoves or two young pigeons, as Mary does here.  The offering of
the poor.

At the same time, Mary and Joseph took Jesus up to Jerusalem to present him  to the Lord: as the firstborn son (Luke 2:7). To give thanks to God for his safe arrival, and to ask God's blessing on his future life. Jesus was consecrated to
the Lord as the law required (Exo 13:2,12), although in fact, this needn't have been done at the temple. The concept of a presentation at the temple probably relates back to the OT book of Samuel (1Sa 1:24-28), where Hannah offered her
son Samuel as a thanksgiving to God, and for service in the temple.

So the idea of giving thanks to God for your first-born and presenting him to the Lord, has an honourable and ancient precedent. But in the ritual of it, Joseph and Mary were doing something quite ordinary and everyday - “as was
customary” as St Luke tells us. They were doing what was taken for granted as being best for the child.  Our job, like that of Mary  and Joseph, is to nurture our children to the best of our ability. It’s awesome  and grand and majestic, but it comes down to mundane, and ordinary and caring  things.  To offer our children such a safe and secure and loving
background, that they're able to grow up as fully rounded human beings. So that  they're able to become themselves, whatever that self might be. And if we can  offer them that, then God is likely to be able both to reach them and to use
them throughout their lives. And their destiny will be fulfilled.

But all through life there are bit-part characters. People who pop up from  time to time, who don't seem to have much of a part to play, but who, in the cosmic scheme of things, are enormously important. People like Simeon and Anna.
Both Simeon and Anna are mentioned only the once in the Bible, and they both  have only a walk-on part. But it's such an important part in the cosmic scheme  of things, and that’s why neither of them have ever been forgotten.

They were both elderly people. They were in the final years of their lives.  We don't know quite how old Simeon was, but we're told Anna was eighty-four, and  had been a widow for many years. Something else they had in common. They were
both spiritually mature people. Both had grown very close to God over the years.  Simeon was perhaps a priest, but certainly a righteous and devout person. And  able to listen to God, for he already knew he wouldn't die before he'd seen the  Messiah. Anna never left the temple. She worshipped with fasting and prayer night and day.

When Mary and Joseph came into the temple with their son, both Simeon and  Anna instantly knew this baby was the long awaited Messiah. Now how did they  know that? There must have been hundreds of families every year, coming to offer
their two turtledoves or two young pigeons, as they presented their sons before  God. Why did both Simeon and Anna single out this family as being different? To  the majority of people in the temple that day, there was apparently no
difference at all. For out of all the many people there must have been milling  around, only these two people, Simeon and Anna recognised that which was holy  amongst the ordinary. How were they able to do that? I think because they'd both
spent a lifetime waiting upon God. Being silent before him, praising him,  praying to him, listening to him, reading his word in the Scriptures. Their whole lives for many years had been immersed in God. So that when the moment  came, they recognised it.

The value of prayer isn't necessarily that God will do wonderful things for  us immediately we ask him.  The real value of prayer isn't as a sort of fourth emergency service to cling to in dire straits, it's more a lifeline to  God. It keeps us connected to God. And through that lifeline, God is able to nourish us. So that gradually, those who have been closely connected to God can  begin to recognise the holy in the ordinary.

There is something magnetic about young creatures. I had a puppy once, a  very attractive but rather doppy dalmation.  Walking on a path over some rough ground near out house, a man came towards us from the opposite direction in a cream suit.  I should  tell you it had been raining, lots of mud and puddles and you can guess what the  puppy was like.  The man in the cream suit spoke to the puppy and it  immediately leapt up at him, both front paws on his jacket.  What draws
people to young creatures?

And human babies too. You're stopped in the street by complete strangers.  Grand parents are want to see all sorts of likenesses with aunts and uncles. The  colour of their eyes or the amount of hair is the subject of endless debates.
And stopped to be told to buy that child some shoes.  There are always  those who are ready and willing to give their unsolicited advise on how to bring  up children.

Simeon and Anna seemed not to look at any of these sorts of things. Simeon  and Anna were well advanced in years and if they commented on the physical appearance of Jesus we are certainly not told anything about it. If they had  proffered advise on how to bring Jesus up, it probably would have been received  as readily as most unsolicited advise is received - it would be ignored and the  person written off as unhelpful. Certainly the words they did say about Jesus  would not have been remembered. When Simeon and Anna saw Jesus, they were lead to see something more than who he resembled, what the colour of his eyes was or the amount of hair he had.

Simeon's words are quite specific - he saw in Jesus an instrument in God's  salvation, someone who would extend the possibility of salvation beyond the  limits of those of the Jewish faith - to all people. This was however not an
unmixed blessing. He would be opposed and Mary herself would know the pain of  that opposition in the keenest terms. The close of the season of nativity already has about it the shadow of passiontide.

I guess if I'm looking for God like Anna and Simeon were looking for God,  I'll find him. If I'm not looking for God, or if I've given up looking for God, I may stumble over God a thousand times a day and never be aware of his  presence. But I don't have to do anything to become aware of God's presence.  It's something which gradually happens through a life of prayer. This dawning  awareness brings both joy and a daunting realisation of the way things really are.  Yes this Lord coming to his temple is like a refiner’s fire or fuller’s soap, disclosing what’s really there at the heart of people.

And, we may never know how important our walk-on bit-parts are to other  people in their own journey. I don't suppose Simeon or Anna ever knew what their  recognition of the Saviour in a tiny baby meant to Mary and Joseph, or even to
Jesus himself. I may never know what my recognition of God does for someone else  in their journey. I may never know how my chance remark helps to shape another  person's life. But the point is, through their lifetimes of prayer, Simeon and
Anna were ready. And because they were ready, their walk-on bit-parts became  transformed into a moment of glory for them, and a very important moment of  recognition for those young parents, Mary and Joseph, and for their child.