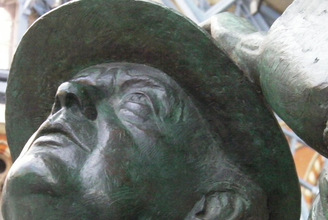 To err is human ... but to really foul things up requires a computer.’ I don’t know who said it, but too often in my experience it’s been all too true. The technology that liberates and makes possible amazing things – and it does – also crazily confuses, disturbs and distorts when it goes wrong. How often has a computer malfunction been the cause of something amiss in your life? It’s mostly just an annoyance – but occasionally it can be even life-threatening.

Last week the computer on which this is being written ‘fouled up.’ So far no one has been able to explain why or how it might be cured. Well, that’s not quite true – there have been dozens of possible explanations but none of them has proved to be the correct one. Ah well! To err is human but to really foul things up requires a computer.

Did you notice the struggle to explain in the Gospel reading? There’s a commonplace explanation of a person’s disability – someone sinned. There are various attempts to explain what Jesus did – he worked on a day on which work is forbidden, or is that he did something so remarkable that it can only be from God? And there are competing explanations of what this might be saying about who Jesus is – is he a flagrant sinner who couldn’t care less about the rules of faith, is he a faith-healer, or is he the Son of Man whose actions declare both God’s  judgement and grace? Or are all these efforts towards explanation best avoided? The man’s parents take that line, ‘we do not know’ they say. But they are the exceptions in the story. Fear of the authorities is at the heart of their avoidance.

For the rest striving after some explanation is paramount. Fault needs to be examined, consequences detailed, and responsibilities attributed. This has to be made sense of – explanations must be found. The narrative John presents us with stands as an example of a constant in human experience – we must explain, we must make sense of things. The urge is always ours. In the face of tragedy we ask ‘why, oh why?’ In response to ignorance we quest to know. In confusion we seek clarity of cause and solution. The urge to explain is worthy and powerful – but it is not always the solution we imagine it to be.

Some things, says Saint John, come not from our explanations but from elsewhere: ‘The true light, which enlightens everyone, was coming into the world ... yet the world did not know him’ (John 1.9-10). As that great modern missiologist, Lesslie Newbigin, put it, ‘The only thing which can ‘make sense’ of a dark world is the coming of light, and that light does not come from below but from above, not from the past but from the future.’[i] The demand for explanation in this story is fuelled by opposition to Jesus. They err in their demand; failing to recognize anything new. Their error leaves them stranded in darkness. In contrast, the one who was formerly all in the dark, has received the light. The light of vision which is given to the man is of a different order entirely: ‘Lord, I believe,’ he says, and he worshipped him.

For the man it is not an issue of explanation, but the reality of receiving and recognizing. He receives physical sight, but he also receives intellectual insight. It doesn’t come easily, he must face hostility and hard questioning. His faith isn’t a precondition but something that comes to him in the acknowledgement of his changed circumstances – both that which is good and that which puts him under suspicion. The opponents of Jesus belittle the man, perhaps because they associate his physical disability with mental incapacity. How easy it is to fall prey to that stereotype. They treat him as a child, assuming at one point that his parents must answer for him rather than he himself. Or, if it isn’t a question of his mental capacity, perhaps it’s not the same person but a look-alike? ‘Is this your son?’ they inquire. The intemperance of their approach contrasts sharply with the way Jesus seeks him out and addresses him directly. Jesus assumes the capabilities the man obviously has, and his physical sight and intellectual insight becomes spiritual recognition, ‘Lord, I believe.’

For the man it’s not explanation, but experience, reception and recognition given by Christ. Those who ERR – demanding explanation, refusing reception or recognition are the opponents of Jesus. In the story they are termed ‘Pharisees’ or ‘Jews’ but they actually represent us all. Whenever we are tempted to use the wisdom of the world to confine and explain away the reality of God we are doing as they did to the man once blind. Don’t allow the urge to explain and make sense of things, as useful and profound as those urges might be, become arbiters of what’s receivable from God. To do so is to put yourself into the dark – a point the gospel story makes plain; at the end its the opponents of Jesus who are all in the dark, whereas the man previously in the dark has had his eyes opened.

To err is human; to forgive, divine,’ wrote the poet Alexander Pope. Mae West famously turned that into ‘To err is human—but it feels divine.' Without the wit or reputation of a Mae West, the interrogators of the man once blind have unthinkingly turned their blind refusal to acknowledge the otherness of God into a parody of the divine. Explanation ruled by a closed system of thought is all they will allow – they err indeed.

This is Newbigin again: ‘The Church is not sent into the world to explain the world but to change it.’ With the man once blind – as the people once blind to Godly reality – we go into the world to share the light we have received as a total gift – Experience, Reception, and Recognition. That’s an ERR that demonstrates our humanity under God.

Amazing grace! How sweet the sound
That saved a wretch like me.
I once was lost, but now I’m found;
Was blind, but now I see.


[i] The Light Has Come: An Exposition of the Fourth Gospel, 1982, Eerdmans