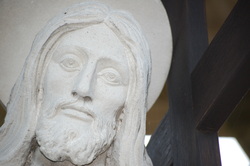 Mr Krushchev, when he was General Secretary of the Communist Party in the Soviet Union, was once addressing a gathering of party officials.  After his talk a voice called out from  the back, “What were you doing when Stalin was carrying out his purges?”  Krushchev said,  “Will the person who asked that question stand up, and then I’ll  answer.”  Nobody moved.  “Yes,” said Krushchev, “and that’s exactly what I was doing - keeping my head down.” (as recounted by Bishop Tom Butler on BBC Radio 4, July 1989)

That’s what Jesus’ friends were doing. Most had run away.  Peter with outright lies had openly denied him.  The women were still hanging about - but they too were hesitant, coming very early in the  morning so that other people shouldn’t know.  Keeping their heads down.  What were the women doing?   In this forlorn early morning they come to offer him a decent burial -  Friday had been so rushed - they come to dress a decaying body with sweet smelling spice. Who will roll the stone away?

But it all goes wrong.  The grave isn’t as it should be.  In Mark’s account there’s nothing spectacular - only a message. And that’s how Mark leaves it. There’s not even an ending. So they went out and fled from the tomb, for terror and amazement had seized them; and they said nothing to anyone, for they were afraid.

That’s it.  There is nothing more.
That’s where Mark’s gospel ends.

What can he mean by it?  What kind of story is this?  It is a story not with an end, but only with a beginning, a different kind of beginning.

Mark started his  story like this - The beginning of the good news of Jesus Christ. … In those days Jesus came from Nazareth of Galilee.  And the message of the young man in the empty grave is, go back to Galilee, go back to where you started. He is going on ahead of you.

Death does not  have the last word. Nor does guilt, so Peter is mentioned by name.  With Jesus new beginnings are always possible.

In the film Lawrence of Arabia, the soldier T.E. Lawrence and his Arab companions have travelled between two wells across a particularly terrifying piece of desert only to discover that one of their party is no longer with them.  Lawrence’s companions shrug their shoulders, “It is written,” they say.  “It is not written,” barks Lawrence and he immediately returns to the desert to search for the lost man.  Hours later, he comes back having found the one who was lost still alive.  The others gasp in amazement and from then on Lawrence is known as “The one for whom it is not written.”

That’s the name for the Jesus people - those for whom it is not written- we are not fatalistic.  In the Galilees of our
lives, always and in every circumstance there is the possibility of new beginning.

In his novel, The Gates of the Forest (1966), Elie Wiesel recounts this Hasidic story:  When the great  Rabbi Israel Shem Tove saw misfortune threatening his people, it was his custom to go into a certain part of the forest to meditate.  There he would light a fire, say a special prayer, and the miracle would be accomplished and the misfortune averted.  Years later when his disciple, the celebrated Magid of Mezritch, had occasion, for the same reason, to intercede with heaven, he would go to the same place in the forest and say: “Master of the Universe, listen!  I do not know how to light the fire, but I am still able to say the prayer,” and again the miracle would be accomplished.
Years later still, Rabbi Moshe-leib of Sasov, in order to save his people once more, would go into the forest and say, “I do not know how to light the fire.  I do not know the prayer, but I know the place and this must be sufficient.”  It was sufficient and the miracle was accomplished.  Then it fell to Rabbi Israel of Rizhyn to overcome misfortune.  Sitting in his armchair, his head in his hands, he spoke to God: “I am unable to light the fire, and I do not know the prayer, and I cannot even find the place in the forest.  All I can do is to tell the story, and this must be sufficient.”  And it was sufficient, for God made people because he loves stories.

Eugene Peterson again,  “We are after something more - more life than we get simply by eating three meals a day and  getting a little exercise.  We’re after God-originated and God-shaped life: a holy life.” A resurrection life.

Mark offers no end because we, with all our brothers and sisters in the faith across the centuries, must make the ending.  Do you remember the millennium resolution, “And from now on a new start?” Or has the newness evaporated?

The story is ours to conclude. How will it be written in the narrative of our own lives?  Mark invites each of us to journey to Galilee in the geography of our own faith.  Be certain the Risen Lord is always there to meet you.  A new beginning.