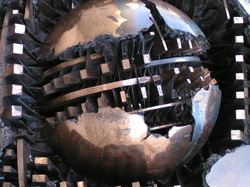 It is a nonsense, what we do now. Think it through rationally.  The physical resources employed here this morning are more than we can afford - or so many would say.  Some years ago now I was involved in the calculation of charges for face to face supervision in a HE college.
If the lecturer involved was paid the visitor’s rate - £22 per hour in those days - then to break even the college had to charge the student £100 per hour.  That’s what all the associated costs of employment and the provision of facilities actually cost.  That was one member of staff, in purpose built modern facilities.  If we did the same sort of calculation
for the hour we are spending together now, the figure we would come to would be enormous. The rationalist might well say that what we do now is nonsense.  It is simply too expensive.

The rationalist  might press us even further.  Turn our own convictions to our discomfort.  Don’t you believe God is everywhere?  Yes.  Don’t you believe that anyone can communicate with God at any time?  Yes.  Don’t you believe that
individual’s must come to God to give an account of themselves? Yes, but …  Hang on, if all that is true, vast buildings, mass gatherings, professional leaders, trained musicians, choreographed performance - all of it is unnecessary.  Not only is what you do an absurd waste of resources, it isn’t even a necessary requirement of your own teachings and beliefs.

In our world of performance tables, targets, strategic planning, and core task management, inevitably the things of that world spills over into this world of worship.  Nathanael is recorded as being sceptical when Philip approaches him.
Many, many people are sceptical about what we are doing.  Not because they are sceptical about God necessarily, but because they don’t see the need for all this. They see what we do as a nonsense, quite literally. It doesn’t make sense to them.

And to that  charge against us I want to reply Alleluia! - which is a word that doesn’t make sense to many people!  Alleluia, because the  critic has taken the first step towards the realization that worship isn’t about a calculating making sense of things.

If I had to live exclusively according to what is rationally defensible, what is clearly substantiated by proof, what is sensibly justified as effective resource management, what a sad life my life would be.  No, I use all those logical and often
worthy things of analysis, of measure, of careful consideration, but they only take me so far.  What of love, and loyalty, and beauty, and blessing, and joy, and wonder, and grace, and delight, and oh so many other qualities that draw from us an uncalculating, even reckless abandonment to life?  That take us beyond the confines of the justifiable to another place all together?  That call from us depths of commitment that can’t be measured?  That bring quality to being alive that raises us far beyond mere existence?  We sing about it no matter what the cost.  We sing because we can do no other.  We sing because God’s tune of love reverberates in us.  Nonsense -well, yes in that it is more than makes  sense.

One evening in the cathedral, a friend who may be here this morning, came up to me after Evensong to say how much the last hymn had moved him.  He said it was one of his lifelong favourites.  I too had been moved, in fact to tell you the truth, to tears as we sang that holy song.  And I was struck that all our different life experiences - including those of an Eton educated composer, and an American anti-slavery campaigning Quaker poet - were somehow subsumed into something so much  bigger.

In case you should think this nothing more than emotion, mere sentiment, let me tell you about the other thought about nonsense I had this week.  It comes out of our first reading, verse 6 of chapter 5  of Revelation:
“…a Lamb standing as if it had been slaughtered..."
What? - a  slaughtered sheep cannot do is stand!  At a cursory reading this is indeed nonsense, but actually nothing
amongst the strange images of the Book of Revelation is nonsense.  Saint John constructs every single picture and symbol with the utmost are. This is his first use of the image of the Lamb, but he will go on to use it another 28 times in his
book.  The Lamb of God is standing in the pose of royal authority, of universal power, precisely because he  accepted the way of the cross, the way of suffering.  The slain Lamb stands - stands to gather under his authority people from
every tribe and language and people and nation, stands to call them (us) into the new community of self-giving love that nothing can destroy.  It is the death of the Lamb that guarantees the creation of this new community, this new way of living.  So Christians through the centuries have sung in every Eucharist the praises of the Lamb:
The kingdom of  the world has become the kingdom of our Lord and of his Messiah,
and he shall  reign for ever and ever.

We sing it out.

But my rational critic may well sound off, “Hang on a minute, this world doesn’t look like one  that has been saved.  How many kids  are going to be orphaned by AIDS today?  How many are going to die a ghastly and painful death because there is no food?  How many people are going  through the hell of torture even as I speak?  Should I go on to mention war, and
crime, and drug abuse, sexual exploitation, poverty, violence, and the rest.  I can’t see that your God has defeated the powers of evil.”

And we must  admit to that critic that we know the force of what is being said, God is clearly not yet victorious. But we
will still sing the songs of the Lamb’s victory.  We will sing about it because singing about is a way of bring about.  We
people of faith are not naive idealists, our heads in the sands. Just the opposite, we face up to the horrors of evil and life despoiled  and say “Halt, it doesn’t have to be like this, in fact the change to a better way has already begun.”  We sing
about the change because singing about is a way of bringing  about.

Let no one think  faith amounts to foolish credulity.  Christians are hard-headed realists when it comes to human
experience.  That’s one of the things Nathanael’s scepticism reassures us about.  He doesn’t accept news of the Messiah with naïve gullibility. The tensions are recognised.  His outlook on life will be radically challenged, but first the news has
to become part of his pre-existing intellectual and cultural make up.

The gospel is always radically new, a turning about, a turning around of the way things are, but that begins in an absolutely honest acknowledgment of the way things are.  Faith sees the world differently but it never indifferent to the way the world is.   We are blessed by God with an alternative reality.  I am sure it is no coincidence that the name Nathanael literally means  “gift of God.”  We are to live in that alternative reality, that vision gifted to us by God.

So I will admit  that worship does not “make sense,” but it does “make love.”  We gather to tell each other, and anyone else who will listen, the story  of the Lamb who died, the Lamb who stands at the right hand of God.  We gather that we may know ourselves, deep within ourselves to be the people of the Lamb.  We gather - to use our imaginations, to use our being together, to use our voices, to make God’s reality more real than apparent reality itself. We gather to sing about in order to bring  about that victory of love that is already won. We sing about to  bring about - that we may live that love every day.
Dear Lord and Father of mankind
Forgive our  foolish  ways!
Re-clothe us in our rightful mind,
In purer lives  thy service find,
in deeper reverence praise.