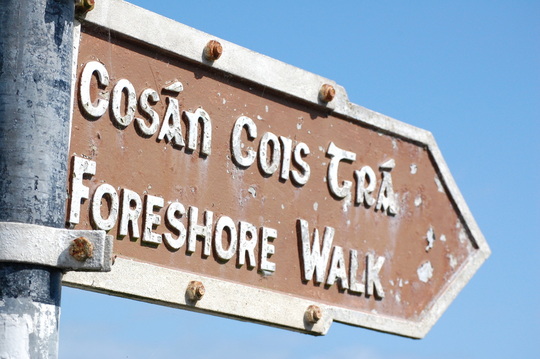 Just in case you’re not familiar with Irish Gaelic perhaps I should translate!  Is féidir linn is ‘Yes, we can.’  The motto that President Barack Obama made his own.

On a visit to Ireland in 2011 he repeated it in Dublin to a vast enthusiastic crowd delighted to be sharing in his homecoming – even if we are talking about seven generations ago.  And given Ireland’s current economic woes, the positive reassurance offered by those couple of words from the President was all the more welcome.  Here’s a man who understands our need of hope, our need to trust that adversity can be turned around.  Add to that the heritage of the Kearneys of Moneygall emigrating to the USA so long ago, and President Obama had a more than ready audience. Is féidir linn.

‘Athenians,’ says Paul, ‘I see how religious you are.’  ‘I feel at home here, I see that you too treat worship with great seriousness.  I see that you too recognize that God is so much bigger than our ideas and systems.  And I see that doesn’t knock your faith that we all live and move and have our being in God.  Can we be certain of these things? Is féidir linn!  Yes, we can.’

So far, so good.  Paul has the crowd on his side.  Not as enthusiastically as Obama’s audience perhaps, but his reception a whole lot better than when he been talking earlier only to the philosophers among the locals.  They had dismissed him as ‘a babbler’ but now at least the crowd’s listening.  Well for the time-being anyhow.

When Paul gets to the resurrection of the dead his audience turns again.  Some think him a clown for spouting such a daft idea, and they make fun of him.  Others just turn away: ‘Oh, we’ll hear about this another time, eh?’ As if to say, if we know that’s what you’re going to talk about we’ll make sure we’re not here!

Familiar words and shared enthusiasms will get you so far, but they don’t necessarily keep people on board.  And sometimes the sympathy created is soon scorned.  Indeed things can become worse as a reaction sets in that puts a doubt against that previous fellow-feeling.  The togetherness of ‘Yes, we can’ all too soon becomes discord.  A few days before the Ireland visit President Obama was at a press conference with Prime Minister Netanyahu of Israel.  TV coverage of that had them looking directly at one another, although obviously disagreeing in how moves towards peace might be advanced between Israel and the Palestinians.  Still photos, however, were taken after the video cameras had ceased – and in those photos the posture of them both made plain the real distance between them. Often it all depends on where you are looking at something from.

At the Areopagus there’s a distancing between Paul and his audience.  Paul shares his hope; but the basis of his hope is too much for most of them.  He cannot press his hope without the conviction on which it is based, but the Athenians won’t countenance that conviction.  They refuse to hear this truth.  Only a few, we are told, join him.

Only days before President Obama in May 2011, there was another speech in Ireland in which an English-speaker used a little Gaelic.  ‘A huachtaráin agus a chairde’ began the Queen at her speech in Dublin Castle.  ‘President and friends,’ she said.  But what followed was of a very different character from the American President’s upbeat style.  She said, ‘It is a sad and regrettable reality that through history our islands have experienced more than their fair share of heartache, turbulence and loss.  'These events have touched us all, many of us personally (her cousin, Lord Mountbatten was blown up by the IRA in 1979), and are a painful legacy.’  There’s a realism and honesty there that’s an essential component of changing relationships for the better.

Paul cannot turn his back on the resurrection of Christ, no matter that is loses him his sympathetic audience.  As 1 Peter puts it, this is an essential part of sanctifying Christ in our hearts, and of this we must always be ready to make a defence to whoever asks us to give an account of our hope.  Realism and honesty can be served no other way.  We may be maligned, we may be abused, we may be fearful or intimidated but our conviction must hold fast to the hope of Christ risen from the dead.  Can we live that hope with love?  Can we live it with open hearts eager to win friends, but without compromising that conviction?  Can we be as Christ even to those who scoff?  Can we live the risen life here and now?  Is féidir linn.  Yes, we can.