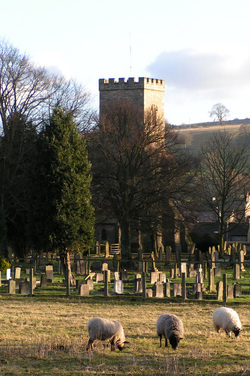 This short homily is an attempt to simply retell the parable of the lost sheep. It is based on two incidents experienced on rural railway journeys in the United Kingdom. The homily takes its shape and style from the monologues of the comedian Bob Newhart. The preacher begins in a conventional way, but then his cell phone rings and the remainder of the script is delivered as if he is speaking on the phone with the congregation over-hearing.


‘Hello (in annoyed tone). Hang on. I’m in the middle …
You’re glad to have found me.
Well, yeah but …
Of course there was no one at home.
I’m in the middle of a service (exasperated).
Yes, I said I’d meet you at the railway station, but the train was due more than two hours ago!
Look, I’ve got to  ring off; I’m in the middle …
Your journey was awesome!
You’ve got to tell me about it – yeah, but can’t it …
It was awesome, wicked, yes I understand,
though I can’t see how a late train from Aberystwyth can be awesome.
It was like a great surprise party.

(To congregation) On Arriva Trains Wales?? (the rail company’s name).

It was the sheep.
The sheep changed everything?
There were dozens of them. A flock.
A flock on the train? No, you were on the train, the flock was on the line.
Right.

The train had to stop because of the sheep.
But why is that awesome?
More sheep than people on the train. Right. 99 of them.

(To congregation) She phones to tell me she’s been counting sheep?

Yes, I’m still here.
You were having a terrible journey – the train was late!
No this was before that, okay.
A gang of loud-mouthed lads travelling back from a party. Shouting. Swearing. Making comments.
Yeah, I know what you mean.
Everyone was on edge. Sense of menace in the air.

This fella told them to pipe down – he got a right mouth full.
What about the Conductor – useless, did nothing. Oh heck.
The train came to a sudden halt. Yeah.
Nothing happening.
The four lads getting ever louder. Lots of argy-bargy.
The fella says there must be a reason and shouting won’t help. Almost at him.
Heck.

That was the Guard – yeah, yeah, the Train Manager. Says, “It’s sheep.”
The lads all start baaing.
You’re in a cutting, in the hills, the Manager’s mobile phone won’t work.

Somebody has got to  move the sheep. He asked for volunteers.
Suddenly the carriage is very quiet.
Yeah, I recognise the feeling. You all looked sheepish.
Very funny.
So the Train Manager climbs out by himself, yeah. Runs at the sheep, his arms out.

What did the sheep do?
Down the side of the train, round the back,
and then back to where they were in the first place.
And that’s what happened every time. Okay.

The four lads have all got their noses pressed against the window and are baaing loudly.

(To congregation) How long is this going to go on for?

Is this a shaggy dog story?
No, it’s a shaggy sheep story. Alright!

The complaining fella, yeah, gets out his laptop.
He says, “There’s everything on the Net so there must be something about how to herd sheep."
Well, I suppose that’s logical.
People gather around him waiting for a clue.
But there’s no phone signal. Yeah, I remember.

The lads start baaing again, but now there are some girls joining in too.

The coach is divided.
The baaers think it’s a great laugh, but the others are getting really indignant.
It’s divided between baaers and bleeters.
Two lots of sheep in the train and one outside.
Yes, I get it; they’re all flockers.

It’s getting really fraught.
Laptop man gets out onto the line.
Others follow.
Then the lads get out as well. Looks as if there’s gonna be a punch up.

Then the old woman appears.
You hadn’t noticed here before.
Asks you to help her out the carriage.
Right.
She walks through the lads, past laptop man and his group, past the Guard – and past the sheep.
She was going to walk to Shrewsbury was she?

(To congregation) Is everyone on this train bonkers?

She stopped. And started whistling gently.
The sheep looked up.
Musical sheep are they?
No don’t get offended, I’m still listening.
As she whistled she walked on. Right.

And the sheep followed her.
But only the four legged ones!!

Minutes later she reappears.
Bend in the track, yeah, but no sheep with her.
And everybody cheers.
I bet!

That’s when the party started. What?

The Guard says its free coffee and muffins for everyone.

(To  congregation) Well, he’d been on his customer relations course!

Laptop man is straight on to his machine.
Eventually he found what?
Sharp decline in railway sheep incidents since the implementation of the secure fencing programme.
Well that’s a relief to know!
He ends up what?
Playing an online herding game one of the loudmouthed lads has shown him how to find on the Internet.
Really! That is quite a story.
You’ve not finished?
Don’t tell me cows on the line?
Leaves on the line?
Snow on the line?
No.
The train goes past the field where the elderly woman put the 99 sheep.
Yeah.
You saw a fella carrying a sheep around his neck.
You thought he laughed and waved, but he was too far away for you to be certain.
Everybody else too busy with coffee, muffins and conversation.

By the time you got to Welshpool the old woman was leading the singing of The Lord’s my Shepherd.
A man got on but quickly moved to the other carriage.
Thought you were all mad. I bet.

Well, thanks for sharing that.
See you at lunch. Bye or Baa.’