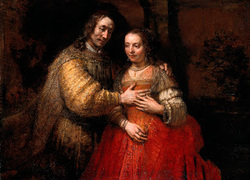 Rembrandt's The Jewish Bride, Rijksmuseum
How do you share an enthusiasm? I mean share something  that really stirs you, heart and soul, with someone who doesn’t share your
keenness? This is a hard thing, if you think about it. Too often the enthusiast  comes across as a tedious bore to the other person without that shared interest.

After all isn’t that where we get the terms ‘nerd’ and  ‘anorak’ from? ‘Oh, he’s a right astronomy anorak,’or, ‘What a nerd she is about
flower arranging!’ And that’s not to be rude about those who are passionate  about stargazing or the artistic possibilities of plants, but simply we all  acknowledge that some individuals let their enthusiasms so run away with them  that they turn-off others, even those who might have had an initial interest.

Even someone who might have caught the interest is  deterred by a nerd. I think with shame of myself as an older teenager becoming  so tedious and detailed with a much older person who had come to me for advice that he never again in the years I met him regularly spoke to me of our shared hobby. Sharing an enthusiasm is difficult.

Then I think about three enthusiasms that have been shared with me, and how they have given a spark to something in me that I didn’t even know was there.

The first was classical ballet. I certainly didn’t want to go when eldest daughter pressed her daddy to accompany her to a local performance by a star company. And, of course, I only went because she was so  determined to go. I prepared myself for hours of tedium, for her sake, but them  the unexpected and remarkable happened. I was transfixed, and caught up in story told in movement and music that was unimaginable to me.

The second was Rembrandt. I had looked at pictures in books and studied some art prints, like so many other people I guess. But I found his work tedious – dark, over-drawn and samey. I found that people get really passionate about Rembrandt, so I learnt to shut up and keep my opinions to myself. Well it was my second daughter who overturned that prejudice and opened my eyes. We were in Amsterdam and so to The Rijksmuseum we had to go, and  my daughter being the artist she is, determined that I must see Rembrandt in the flesh, as it were. So I stood with so many others and wept at the amazing  painting ‘The Jewish Bride’ – how can the light come out of the canvas in that way? She had shown me, firsthand, the wonder and power of Rembrandt.

The third was The Olympics. Again I was sceptical – not being a particular sports fan. Again it was a daughter, my youngest, who showed. ‘This’ll be a once in a lifetime experience, Dad.’ Of course, I agreed that our holiday should be Olympian London because she was so keen, I didn’t expect much and took lots of books to pass my time away. You know how the story ends! It was a once in a lifetime experience.

Transfixed, my eyes opened, a once in a lifetime experience. Enthusiasm shared in a way that led me to new things, new
understandings, and a shift in my outlook on life. No nerdy turn-off here.

And that brings me to Matthew –so eager to share the Epiphany that was the birth of Christ. This is a moment in which God is tangibly disclosed to the world: a unique and remarkable self-revelation. The divine becomes enfleshed, enmeshed, in the everyday of human living. This revelation of God has bowled Matthew over and he is determined to share the enthusiasm that it his; the enthusiasm he has leant from those first followers of Christ. He has been transfixed by what he has learnt of Christ, his eyes opened, and his experience marked forever.

Now he shares that enthusiasm – shares it that those who read his words may be embraced by it, catch its wonder, and see its significance for themselves. He must not be the nerd who turns them off by his elaboration and gushing enthusiasm. He must share what is so important to him in a way thatincludes rather than excludes; that incorporates rather separates; that entices and attracts rather than rarefies. Certainly, he will acknowledge the costliness and the tragedy as well as the glory, but for the moment he will dwell on the wonders of revelation.

This Christ comes for all. He is born a Jew amongst the Jewish people but to the experts and enthusiasts of that nation his birth is a surprise. A royal warrant has to be issued to get them together to do some real work on it. But these pagan seers who have come from some far off places already know the truth of his birth. They already know the good news. This birth is for  all, not just the chosen few. Could it be plainer? You want to divide the world up into pagan and faithful – but God does something else. He has friends amongst  those you call infidels, foreigners, and pagans. King of the Jews alright, but
Saviour of all – Jewish or not, says Matthew. Story language it might be, but the point is clear and unambiguous. This Christ comes for all. As Ephesians has it, ‘The Gentiles have become fellow-heirs, members of the same body, and sharers in the promise in Christ Jesus.’ (Ephesians 3.6). Matthew would add his ‘Amen’ to that.

He has a passion does Matthew – as familiar as he is with Jewish ways and thinking, he knows deep within himself that salvation goes way beyond the bounds that people so often impose. It’s as if he is saying, “If you can’t see it from my point of view, my enthusiasm, then at least listen to what your own Scriptures say: ‘Your light has come, the glory of the Lord has risen upon you ... nations shall come to it’ ... carried on a multitude of camels, ‘they shall bring gold and frankincense, and shall proclaim the praise of the Lord.’ Listen to the great prophet, listen to Isaiah. As he said, those from  faraway shall look on this wonder; the wealth of the nations shall come to you. Gold speaks of wealth. Frankincense speaks of praise and worship.”

And to stop us readers being tempted to dismiss Matthew’s voice as the crazed fantasy of the enthusiast, myrrh, the herb of death, is one of the gifts. Yes, he acknowledges the costliness and tragedy as well as the glory. His story will be clear about where this wondrous birth will lead. The cross already looms. Weeping, and loss, and bitterness will have their part all too soon – but for now the Magi are overjoyed.

Share Matthew’s enthusiasm. It finds its source in love that has found him. He uses common ground – the Scriptures – to open his reader’s eyes. He uses a story to include and incorporate, because that’s what stories do. Somebody said that stories are flight-simulators for living, and that’s just what Matthew aims to achieve: be transfixed in praise as were these
seers from faraway; open your eyes to God for all; know this in your own experience – ‘a mystery hidden for ages’(Ephesians 3.9) but now made plain – let ‘your heart thrill and rejoice’(Isaiah 60.5) at this.

Kings shall fall down before Him, and gold and incense bring;
All nations shall adore Him, His praise all people sing;
For He shall have dominion o’er river, sea and shore,
Far as the eagle’s pinion or dove’s light wing can soar.

For Him shall prayer unceasing and daily vows ascend;
His kingdom still increasing, a kingdom without end:
The mountain dews shall nourish a seed in weakness sown,
Whose fruit shall spread and flourish and shake like Lebanon.

O’er every foe victorious, He on His throne shall rest;
From age to age more glorious, all blessing and all blest.
The tide  of time shall never His covenant remove;
His Name shall stand forever, His Name to us is Love

– So dreamed James Montgomery in the grime and corruption of nineteenth-century industrial England, but as we sing his words let them not be a dream, but Matthew’s enthusiasm shared in our sharing.