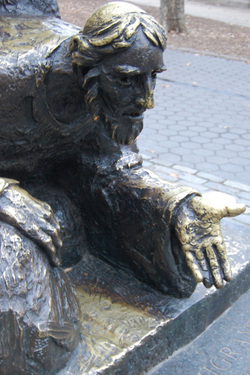 Somewhere the biblical scholar William Barclay tells the  story of a faithful servant girl. It comes from the days when a domestic servant was expected to work all day and that really meant a good part of the night as well. The young woman said that because of her work she had little time to practice her faith between Sundays. So, she said, she took the used morning newspaper to bed with her. She turned to the family notices columns and read the birth notices. She prayed for the babies that had just come into the world. Then she turned to the marriages column and prayed for true happiness for the couples mentioned. Then finally she read the death notices and prayed God’s comfort for all who mourned and were sad. Barclay concluded, ‘No one in this world will ever know what blessing to unknown people came from an attic bedroom from one who prayed.’

I guess that in our contemporary way of looking at things ‘praying always’ in the sense of trying to centre ones’ emotions and thoughts and dwelling on the inward aspects of life is reckoned to be a ‘good thing.’ Much is spoken of ‘centring prayer,’ meditation, and spirituality as an effective tool in coping with life. But that is not what she was about: she was
doing what many consider to be the most problematic aspect of prayer. She was praying for others; she was interceding, and doing so not even for her own loved ones and friends, but for total strangers. Remarkable; she did it and she didn’t
lose heart. That’s persistence in faith alright.

I don’t think, however, that she considered what she was doing as any kind of achievement. Indeed the way Barclay tells the story brings with it the implication that she considered this all she could manage in the circumstances. It’s as if she thought that were she wealthier, or had a less menial job, or could take more charge of her own time, she would have been a better disciple. How wrong is such a thought – her story is an inspiration to me who has so much more time than she did but still can’t keep at it in the way she did. Like the widow in the parable who was constantly bothering the judge, she
simply kept at it – but unlike the widow in the parable she didn’t worry about outcomes, she relentless did it.

We have to admit that such determination comes hard to us. It all too easy to tell yourself that you can’t keep at it; that you’re failing at it; that it’s such a struggle that losing heart comes all too easily. The widow has indignation and anger to keep her pestering the judge. We can imagine such emotions being a constant spur, but they don’t seem appropriate to
faith and prayer. We get Christ’s requirement of persistence but feel the woman’s anger is colour in the parable that we shouldn’t take literally. We know our persistence is feeble in comparison.

Often the world seems full of failed Christians. So often someone has said to me, ‘I know I shouldn’t be afraid, Vicar, but I am ...’ Loss of heart? Well, maybe; but I have to say it is not a failure in Christian faithfulness to be frightened of hospitalisation, surgery, illness or pain.

‘I know, Vicar, that I shouldn’t feel this way. It’s wrong to be angry; I shouldn’t be hurt by the way they treat me, that’s not being a Christian.’ Who says Christians aren’t to be hurt when other people snub them or they face hostility or vicious gossip? If it was easy to be sanguine in such circumstances Jesus would have taught so often about the struggle that is
loving as God requires. The parable is told to the disciples precisely because Jesus knows how hard it is to persist in prayer; how hard it is to love your enemies and pray for their well-being.

‘I just can’t pray like that, Vicar. When they say we’ll keep silence now, I feel the panic rising in me. And when everyone chips in their prayers, I squirm. I’m not Spirit-filled like them.’ Who says prayer has to be like this or like that? There are lots of ways to pray. No one should try to programme another’s response. Pray always, yes, but pray as you can, not as
you can’t.

Behind these anxieties and many others is the notion that once you’ve got faith, as it were, life comes easy. Yet that isn’t what Jesus taught – he was plain that encouragement is often needed, that losing heart is a common experience, and that steadfastness in faith doesn’t come easily. Persistence in the parable moves the unjust judge to do the right thing – how
much more can the just judge – God – be relied upon for compassion and care to those of his people oppressed by troubles.

Faith does not insulate us from the turmoil of human living – hope always comes hard. Praying always without losing heart is part of the struggle of faith. It’s a willed determination that God can be relied upon – even when I, the pray-er, am all too conscious of my hesitance, my insecurity and my poverty of motivation. The parable reassures us that we win through, by the grace of God. There is no way to by-pass what life brings – keep hopeful, keep prayerful, keep at it.

So take heart –
· if you find hope difficult to sustain, remember this has been the experience of men and women of faith in every age
· if prayer seems barren – a struggle with little reward, know that the persistent attempt is in itself a prayer that God
will not despise
· and remember our salvation depends not on how we feel but on the gracious love of God

Let our eyes be fixed there – on a God who bleeds for hispeople; in that is our hope and redemption. Do not lose heart.