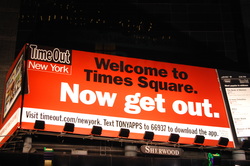 I look at the pictures of devastation from the eastern
coastal USA and I wonder how people are coping. So many homes destroyed; so much chaos; so much mess and anxiety and fear. Some commentator says, ‘This is terrible, but think how much worse it would be in a poor country.’ And I resent the thought. Suffering doesn’t bear comparative analysis, I think. When I see an elderly woman crying and trying to choke out some explanation of how she feels in front of the pile of match-wood that used to be her beloved home, no justifying words can make her hurt less than another person’s. Our hearts go out to those who suffer loss. Our prayers go with those striving to restore things. And our hope goes with those attempting to get on with living despite it all.

A few days ago I was walking the streets of New York –  enjoying the place, enjoying its energy, enjoying its vibrancy. They call it ‘the city that never sleeps’ and I guess that’s something about liveliness, and verve, and energy. And those things communicate. There’s a buzz about the place. That’s my experience of Manhattan anyway. Everything yells ‘life’ – from the  gaudy lights of Times Square to the art and fountains of the Lincoln Centre. We may think back to the horrors of 9/11 but that terrible day only serves to  underline the ‘can do,’ ‘will do’determination of the city. New York has risen
above the malice of ill-will and destruction. Its culture of determination for living will out. This is the last place to associate place with destruction or chaos. ‘New Yorkers bounce back, that’s what we do,’ said someone, and I knew
what she meant.

But hold the thought of chaos a moment. Someone else, who’d lived in New York a long time, said the day of Storm Sandy could only be compared to 9/11. Not in loss of life, thank goodness; though again comparison would be wrong. Any life loss is hurtful and tragic. But the parallel he was trying to make was, I think, about something else. A city that somehow stands as a metaphor for life itself, in all its excitement and verve, was suddenly cast into the eerie silence of watery chaos. What usually speaks of bustle and energy and vitality was engulfed by a crashing cacophony of natural force that wouldn’t
be stilled. The storm spoke of uncontrollable elements and deathly powers. For a while, and thank God it was only a while, the place didn’t speak of the life-sustaining hopefulness that is its hallmark, but of something else altogether more desultory.

That same binary of association is in our gospel reading: it’s clear that Jesus and Mary, Martha and Lazarus were good friends. Friendship speaks of hopefulness, togetherness and belonging. Of things that can be achieved and shared. But now those associations are broken by the death of Lazarus. The stench and look of death hangs about the place. No wonder Jesus joined the crying. There is real loss here. The cost of being together, and all that achieves, is broken, and how that hurts. Love costs; life costs. And those hanging about know it: ‘See how he loved him!’ Those some scoffed: ‘If it’s true
he can make the blind see, surely he could have stopped his friend from dying?’ You can hear the resentment in their words. But that hardness of heart won’t have the last word.

From the place of death and destruction Jesus shouts life, ‘Lazarus, come out.’ Not even death shall thwart this man’s determination for living – what binds, and constricts, and destroys shall be overcome. God’s people shall be let go. ‘Did I not tell you that you would see the glory of God,’ says Jesus. Let the light into this cave of despair and see something
different – see hope and life rekindled. Let rip, cry out with a loud voice, and you’ll see thing change towards life anew. Yes, it’s a pre-figurement of Christ’s own resurrection in the gospeller’s account, but it also says something about that resurrection means in the here and now of our own day, as it said something to the here and now of Mary and Martha’s day. Don’t let death and the fear it brings bind you, look up and see the glory that otherwise goes unnoticed for that glory won’t let destruction have the last word.

And the nurse said, ‘I heard the appeal for qualified people just as I got home so I turned around and went straight back to the hospital.’ ‘They got her out,’ said another newsman, 't meant walking all up the street in the water above their waists; it was scary,but she’s safe.’ Or I think of the picture of a newborn baby clutched firmly to woman’s breast and led to
warmth and life from a hospital without power or light. New York pictures, I know, but I’m sure they were repeated in one way or another in New Jersey and  the other states hit by the storm. And I’m sure they've been repeated here, and
everywhere where death has tried to gain the upper hand and people have looked up and said, ‘No, we will not be bound.’ God meant us for life in all its fullness and that life shall not be thwarted.

And that brings me to All Saints– you thought I had forgotten, but in reality I’ve held the idea of the community of the saints close to me in my prayers and thoughts in these days. You see, sometimes I find it impossible to lift my head towards God’s glory; sometimes I cannot make that shout for life; sometimes death and sin seem to win and I feel bound by my experiences and crushed under life’s uncertainties. Sometimes I need to trust a friend to do it for me, a soul companion to ease my burden, a dependable pioneer who has stepped the way before me. I need to know that I am not alone; that others have walked the way; that when my vision is clouded by doubt or despair I  can rely on others have had the vision that I cannot see. (Did you notice how many times seeing is mentioned in our two readings?)  That's a prayer and a hope for us all.

I need to know that I am part of a community that keeps the  faith even when it is beyond my grasp.  I may not be able to marry the things  of heaven with the things of earth – but others have done so whom I can trust,  and on their witness I will depend until I can make the testimony of truth for myself. This All Saints season tells me that I belong – I belong to the company  of Christ’s people that knows none of the barriers that so easily bind us; I belong to a company that joins the past with my present and with a future yet unborn; I belong to a people who will guard and sustain me because we are all
united in Christ.

What began in the garden of creation will find its  fulfilment and completion in the holy city. As bound Lazarus hear the shout of  Jesus from outside the darkness of his cave tomb so we hear the shout of Christ risen calling us forward whatever our woes:

See, the home of God is among mortals.
He will dwell with them;
they will be his peoples,
and God himself will be with them;
he will wipe every tear from their eyes.

We stand amongst his saints, held together by his love, and knowing a companionship that is unending. There’s a message of hope and a  message of concern. Encourage the hurting that we are never alone in our sorrows. Share the burden and share the joy. We belong. May we know that the saints surround us. A Prayer for us all.