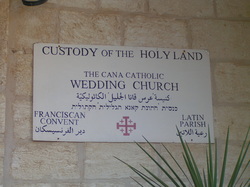 It can’t be a conspiracy can it? It can’t be that somebody, somewhere,  doesn’t want you to know this? You see the story of the wedding in the village of Cana doesn’t end where our reading of it ended. There’s another verse – but it’s hardly ever read in public. Well I’m going to break the rule and read it to you. It says:

After this, he went down to Capernaum with his  mother, his brothers and his disciples; and they stayed there for a few days. (John 2.12)

Well, that doesn’t seem very important, you say. But hang on a bit. It’s the “stayed there” that’s got me  thinking – emeinan – remained – from the word menoo. Yes, lodge, stay, dwell, remain, are all adequate translations. But I’m certain it could mean rest.

Do you get it? The gospel writer  is telling us that this wedding had been such an amazing party that they had to rest up for a few days after it – they had had such a humdinger of a knees up that they needed to sleep it off! That’s how the ministry of Jesus begins in John’s account of it – at the least it tells us that God wants his people to have a real humdinger every so often!

Chris Heath, a minister in New Zealand whose sermons are regularly published on the web, offers the following comment after he had returned to work with a prescribed diet following illness:

"It seems an odd coincidence that this, my favourite miracle story, should occur on the first Sunday back after my sick
leave, after I have been restricted to 2.2 standard glasses of red wine a day! The brussel sprouts and the skimmed milk I can cope with, but just 2.2 glasses of wine... 275 ml of claret. The 180 gallons of wine of the wedding feast is 818 litres. It would take me 2975 days to get through that, over 8 years!" (http://frsparky.net/a/169.htm)

This wedding was some party! In ancient Palestine a wedding was a really notable occasion. In most people’s experience of living there was much poverty and constant hard work, so when there was a wedding they turned it into a week of festivity and joy. This was one of the supreme occasions of a person’s life.

I guess I might be getting myself into trouble here – going on about partying and wine. But I hope you get my drift that the wine stands for something else. John’s gospel is a book full of signs – happenings and symbols that mean important things about Jesus. John isn’t interested in “how did this happen?” but “what did this mean?”

According to the Scriptures, wine, because of all that it symbolises, is considered to be one of God's most precious gifts. The Book of Psalms says it "gladdens folk's hearts" and elsewhere it’s referred to as a blessing from heaven. I've heard it said that one of the definitions of joy is that it cheers like wine! For a  Jewish feast, wine was essential. So, for the wine to run out at a wedding would  have been a terrible humiliation for the bride and groom. There is real compassion in what Jesus does – he is saving the couple and their families from public humiliation.

So what does all of this mean  for us? Don’t tell anyone who asks that the preacher told us to go partying!  Well, John's gospel has been called the “Gospel of the Holy Spirit,” because he is always telling the reader about the Spirit in Jesus’ life, and he uses many symbols to communicate that idea. In fact, there are several words for which the reader can simply substitute the word “spirit” in order to find the deeper meaning of the text. Two of those words are “water” and “wine.” Do that with the words Mary first speaks to her Son: “They have no more wine,” becomes in  John's eyes “They have no more Spirit.”

This is about how to get out of those times when everything seems, well, flat. Fizz-less. When life seems so very ordinary, like the water in the gospel. Boring! What we need to do to change our lives, change our outlook, change our attitudes. There are all kinds of ways of doing that, like for example, doing something special for someone else. In other words and in the gospel writer’s language, to allow God’s Spirit to enter our lives. Live it up! Live the life that God means to live through you. Let there be some fizz in it – like a great party.

In God’s world, there are more and more good things to be had. The chief steward congratulated the wrong person for the exquisite wine he had just been presented with and tasted. He congratulated the bridegroom – not Jesus. The wine was not real because he believed; it was real despite his complete ignorance of where it had come from or who was responsible for it. Indeed if he thought there was anything unusual, it was only that the bridegroom had left it so late to bring out the good stuff. That was hardly miraculous, or even remarkable. If anything, it was decidedly peculiar behaviour – quite out of the ordinary.

Yes, the strange thing is the best wine comes later. This is good wine, and it overflows in a way the poorer stuff served ealier didn’t – 180 gallons is a lot of wine even if it is plonk. But this is the very best that anyone could imagine. That is truly  awesome!

And it is not less of the good quality, but overflowingly more of the good quality! Lap it up! The best is yet to be! Gospel living is always moving forward towards eternity – not optimism, not a naïve belief in inevitable progress, but the certainty of God as our goal. Christians always have something to look forward to. God is not stingy. The miracle of the water turned into wine is the transformation of the past into a new and quite wonderful present and future. A momentum towards God that changes the way we look at everything. Lap it up!

Learning is one of the ways to lap it up. Think of the practice that needs to put into the learning of a musical instrument or the playing of a particular sport: the real enjoyment and transformation that comes through perseverance and dedication. Wonderful things – there comes that time when you’ve mastered whatever the thing is and the skill becomes fluid in your use of it. I was watching someone knit the other day – it was as if there was nothing to it at all and yet something intricate, beautiful and useful was being created with apparent unthinking ease. Something that only years of practice can achieve. I’ve seen the same thing in football, in driving, in horse riding, and oh so many things. Lap up the delight of that.

The overflowing goodness of God is for one and for all.
Believe it! Live it up! Lap it up!
The good wine of God love will never run  out.
As they say in those American TV shows, “Enjoy!”