Preaching in an amnesic society 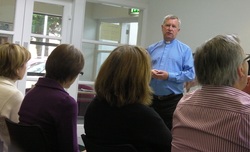 Practicalities of design and delivery

This is a kind of an amalgamation of Saint Augustine and Maurice Halbwachs! These are suggestions for crafting sermons that take seriously both rhetoric and collective memory.

For Augustine (354-430), wisdom and truthfulness always had to come before eloquence. Nevertheless he remodelled Cicero’s (106-43 BC) ideas of rhetoric so that they might be used in the service of the Gospel. According to Cicero the orator must teach, delight, and persuade. Augustine in his preaching added a conscious effort to get the listener’s attention and maintain the listener’s’ active interest. These rhetorical skills, however, were always subservient to Christ the ‘interior teacher’ who speaks to the heart of the believer. As Augustine put it ‘We preach, but God instructs’ (sermon 153.1).

Our preaching should be


Immersed in the tradition


Imaginative and go beyond the obvious


For the voice of Augustine himself see
Essential Sermons (The Works of Saint Augustine), edited by Daniel Doyle and Edmund Hill, New City Press, New York 2007.