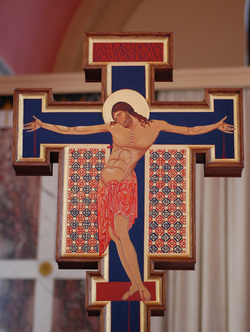 You are a priest for ever, according to the order of Melchizedek
(Heb 5.6)  (solo voice, unaccompanied)

So go some of the lyrics of a song from George Gershwin’s opera
‘Porgy and Bess.’  In 1935, the year of its first production, it seemed
increasingly obvious that the song entitled ‘It ain’t necessarily so’
was offering at least a glimpse of something  profound about scripture -but the years since, and perhaps particularly the last quarter century, have seen the distinctions harden between the literalists and those prepared to  go at least some way with the song. Indeed to concur with the sentiment ‘It ain’t necessarily so’ nowadays puts you on one side of a battle.  These things we know all too clearly in our own Church, in our own Communion.  The use of the Bible is  a hot issue – strangely at the same moment when public surveys suggest that the actual use of scripture is in sharp decline, on both sides of the divide.

Does it have to be like this?  Let me offer you another way.  Not my way, but the way of the writer to the Hebrews.
Just one sentence from the epistle:  (The choir at this point sings)
Thou art a priest for ever after the order of Melchizedek.

Stirring stuff.  But what does it mean?  And how does it help us with our prayers?  We need to know because there is going to be a lot more about Melchizedek later in Hebrews.  The writer obviously believed his discussion was really important to the life of Christian faith.  But why?

Melchizedek is mentioned twice in the Jewish scriptures:

After a bloody but victorious battle in which Abram and his allies had defeated four kings, the fourteenth chapter of Genesis says,
And King Mechizedek of Salem brought our bread and wine; he was priest of God Most High.
He blessed him and said, ‘Blessed be Abram by God Most High, maker of heaven and earth; and blessed be God Most High who has delivered your enemies into your hand!  And Abram gave him one-tenth of everything.

and then again in Psalm 110 is written,
The Lord has sworn and will not change his mind, ‘You are a priest for ever according to the order of Mechizedek.’

And that’s it; those are the only references.  In chapter seven of Hebrews they will be elaborated in to a discussion
about Jesus and what he achieves for us, his people.  In doing this he goes way beyond literalism, he weaves an argument that uses the texts in a novel way that goes beyond what’s in the texts.  Jesus of Nazareth doesn’t figure in the Hebrew Scriptures but the author uses the Melchizedek passages as pointers to Jesus.  The Jews and Christians of his day shared a common Bible, and he asks his contemporaries to read passages in a new and original way.

And it really is new – in the Judaism of the time lots of people were thinking and writing about the heavenly temple since the Jerusalem Temple had been destroyed, but none of them associated Mechizedek with it; in the Christianity of his day much was being said about the messiahship of Jesus but nobody else talked of this Messiah as High Priest. This is fresh thinking.  This is a biblical writer’s way of dealing with the Bible.

And he goes even further. The Rabbis taught that Melchizedek was without lineage; this they deduced because the Jewish Bible doesn’t mention his parents.  This Hebrews picks up as foreshadowing of Jesus, Son of God.

Because in Genesis Abram gives a tithe to Melchizedek, the author further deduces that he is superior to Abram.  After all Melchizedek blesses Abram, not the other way around.  Put that alongside the reference to an eternal order of priests under Melchizedek in Psalm 110, and the author believes it to be a clear demonstration that the old Jewish/Levitical priesthood was never adequate to the task of bringing people to God.  No, says the author, we now have what we need, an eternal High Priest who offers the ultimate sacrifice.  Add in bread and wine in the Genesis reference alongside the meaning of the names used - Melchizedek means King of righteousness and Salem (Shalom) means peace - so Melchizedek, King of Salem, is a king of righteousness and peace, and the author’s argument is complete.

Melchizedek clues us in to who Jesus really is; a king High Priest of righteousness and peace who doesn’t come with all the baggage of Temple worship.  You are a priest for ever, according to the order of Melchizedek.

Out of the popular religious culture of his day, with a thoughtful use of scripture, and some profound original thinking, the author gives an account of Jesus that connects with his hearers.  Interesting – I hope!  But I said this discussion is important to our prayers – how?

It’s an issue of solidarity.  Jesus really is one of us.  He is able to deal gently with the ignorant and wayward, since he himself is subject to weakness.  This Jesus is flesh and blood, emotions and reason, heritage and independence, just as we all are. The cross would break the life out of any of us, as it broke him.  Jesus’ sympathy, Jesus’ solidarity, Jesus’ humanity is never in doubt.  But can a crucified body make any difference?  Can a tortured and bruised, all too human Jesus be High Priest?  Be the one to carry us in our bruised humanity to God?  Yes, oh yes, says the author, he more than fulfils all the functions of a priest – he was appointed by God, he offers sacrifice as a priest should, and above all he
tirelessly offers up to God the human condition – in the days of his flesh, Jesus offered up prayers and supplication, with loud cries and tears. He prayed, and he prays, asking his people to join with him, as would any priest.

Mind you this isn’t the nice well ordered prayer we’re used to.  This is the gut-wrenching things of desperation, of shame, and self-serving words, as well as the prayers we’ll readily admit to because they’re respectful and responsible.  St Thomas Aquinas taught that it is permissible to pray for whatever it is permissible to desire – he knew a bit about the way we fool ourselves.

When two young men, upwardly mobile types, told Jesus their most fervent prayer was to have the two top job
in his cabinet (Mark 10.35-40), he filled them in on the consequences of that request.  That story also figures in the Gospel
of Thomas and there Jesus says, ‘Whoever is near me is near the fire.’  Which doesn’t seem too unlikely does it?  The Way of Jesus forged in our prayers leads us to the same solidarity as Jesus, with the stricken, smitten and afflicted.

The anti-Nazi German theologian Dietrich Bonhoeffer touched the depths of that solidarity when he wrote from prison:

Men go to God when they are sore bestead,
Pray to him for succour, for his peace, for bread,
For mercy for them sick, sinning, or dead:
All men do so, Christian and unbelieving.

Men go to God when he is sore bestead,
Find him poor and scorned, without shelter or bread,
Whelmed under weight of the wicked, the weak, the dead;
Christians stand by God in his hour of grieving.

God goes to every man when sore bestead,
Feeds body and spirit with his bread;
For Christians, pagans alike he hangs dead,
And both alike forgiving.

No, Jesus wasn’t indignant with James and John, but the other ten they were (Mark 10.41). And that calls from Jesus a stern  dressing down – you know that power and authority is a top down, hierarchical thing (Mark 10.42-45).  Those who are accounted to rule over the people and throw their weight about, always pulling rank.  The Big Shots play power games; the
word in Greek is megaloi, the root of our megalomaniac. But with my friends, says Jesus, that is never the way. Whoever wants to be mega here, the Big Shot, has to be the servant, the slave, the flunky. The Truly Human One, Jesus, came not to be waited on, not to be a Big Shot, but to be a servant to the human community, to give his life in the liberation of others.  That’s solidarity.  Praying with Jesus is always like that.

Gonville ffrench-Beytagh one time Dean of Johannesburg cathedral and a spiritual mentor to many wrote,

Your prayers are necessary and if you will not bother to intercede you are refusing someone a source of strength and help.  Consider this world in the present – the fear, the starvation, the many kinds of distress, and our terrifying weakness.  Some of the trouble exists because Christians are too damned lazy to pray – and I mean that literally.

Go with the High Priest to pray for anything that is your desire, but be sure that praying with this high priest will change you. Priestliness according to the order of Mechizedek is different.