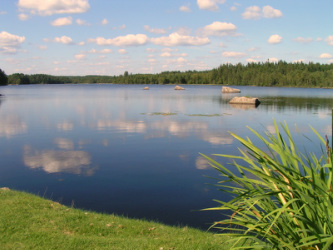 Since today is the beginning of the Church's new liturgical year, it might be helpful to consider the "reason for the season" of Advent. Advent has a twofold character: as a season to prepare for Christmas when Christ's first coming to us is remembered, and secondly, as a season when that remembrance directs us to await Christ's second coming at the end of time. During the first few centuries of the church's history, pagans observed a manifestation of the divinity that came to dwell in its temple at a certain time each year. The feast which honoured this divinity was called adventus.  Thus, as the church year evolved, the word adventus was available to describe the second coming of the Son of God in the temple of his flesh.  This twofold aspect is reinforced by the readings for each of the four weeks of Advent: on the First and Second Sundays of Advent, the focus of the readings is on the second coming of Christ at the end of time, while on the remaining Sundays, the purpose of the readings is to prepare us to celebrate the first arrival of Christ at Christmas.

If we look at today's readings, we see that they are addressing Christ's Second Coming.  The first reading from Jeremiah speaks about the coming of the Saviour to rescue his people. Then the gospel speaks of the end of the world. Two weeks ago, we had a passage from the gospel of Mark which was very similar in theme to today's passage from Luke: both focus on Christ's second coming, or parousia.  However, Luke uses a word which Mark does not. Luke says there will be "signs in the sun and moon and stars". The dictionary defines a sign as an indication; a conventional mark, figure or symbol used as an abbreviation for the word or words that it represents; an omen or portent.  Jesus is using the word sign to mean a
portent of things to come.

Like most children I always looked forward to Christmas. A special treat was when I was told, "Uncle Charlie is coming!" because I knew he would bring some great gifts. And when company was coming to our house we all had jobs to do. We had to clean up the house and ourselves. And then we would see Uncle Charlie, walking down the garden with an arm full of gifts.

Today is the first day of the Christian Year. It's New Year s Day for us. It's the beginning of Advent. And the message of Advent is, "Company's coming! So get ready. Be prepared."  Read the signs right.

There's probably no Christian teaching that's caused more excitement and confusion than what is often called the "second coming of Christ." I do not believe that it was the desire of Jesus that this be a frightening, confusing teaching. On the contrary, it should be a source of hope and assurance, a great stimulus to faithful discipleship, if it's rightly understood.

In the Peanuts comic strip, Linus and Lucy are standing at the window looking out at the rain falling. Lucy says to Linus, "Boy, look at it rain...What if it floods the earth?" Linus, the resident biblical scholar for the Peanuts, answers, "It will never do that...in the ninth chapter of Genesis, God promised Noah that would never happen again, and the sign of the promise is the rainbow." With a smile on her face, Lucy replies, "Linus, you've taken a great load off my mind." To which Linus responds, "Sound theology has a way of doing that."

Yes,"sound theology," the teachings of scripture and the Church, rightly understood, will take a load off our minds about this doctrine but will also put a load on us - a load of discipleship, of working, watching, witnessing - for Company is  coming!

This has been a troublesome and confusing doctrine because of the kind of language the Bible uses to describe it. Scholars call passages like this one from Luke 21 apocalyptic literature. You find it in the Books of Daniel and Revelation. It  was a style of writing that used vivid, striking images to convey a message of hope and faith. It was used especially during times when God's people were being severely oppressed. The Book of Revelation, for example, was written at a time around the end of the first century after Christ, when Christians were being persecuted by Rome. John, who wrote it, was on the isle of Patmos, exiled there by the Romans because he refused to deny his faith. So he writes to his suffering churches, using the language of apocalypticism, using words and images he understood and his readers would understand but that the enemy would not understand.

It's a kind of code. And, unfortunately, we today do not fully understand it. But we can understand its essential message. When you put it all together, it's saying, No matter how bad it looks, don't give up the faith. Hang in there, for God is
in control. So watch and work and pray. God is coming."


We believe that there is coming a day when God will send Christ again, not as a lowly babe born in a stable, but as the glorious Lord of heaven and earth. And he will complete the saving work he began. Paul says it best. On that day, Christ will come, and "every knee will bow and every tongue confess that Jesus is Lord."

Like the Sunday school class that always followed the church readings, one Sunday when the topic of the Book of Revelation came up. Everyone was pretty much agreed that they really didn't understand it. But there was one child who said, to everyone's surprise, "I understand it." "Well, explain it to us," they asked. "It's simple, really. It  meansthat Jesus is gonna win!"  That's pretty sound theology.

I think that the church makes two mistakes in regard to the teaching of the end times.

First, some do become obsessed with it. In fact, many claim to know too much about it. It's not a bit confusing to them. They can pull out their charts, graphs and timetables to give you a very logical explanation. Reinhold Niebuhr, a Christian scholar whose theology was quite sound, once said, "Some people claim to know the temperature of hell and the furniture of heaven."

Of that day and hour, Jesus said in Mark 13, the angels do not know, nor the Son. And when he was asked in Acts 1 when the end times would take place, he tells them, "It is not for you to know the times or periods that the Father has set
by his own authority. Here's what you are to know. You will receive power when the Holy Spirit has come.

Beware of those who claim to know more than Jesus himself said he knew.

The other mistake the church makes is in treating this teaching too lightly or dismissing it altogether. Some see it as an outdated doctrine that causes more trouble and confusion than it’s worth. It's no longer relevant for us.

Both of these extremes, obsession or ignoring it, make for bad theology. There is a tremendous message in this teaching for us - yes, a word of warning about the evil in our world, but even more a word of hope that this still is God's world
and that Company is coming, Divine Company, coming to bring all things to completion.

That's the message. Company's coming and we must be ready. Jesus gives us instructions on how to prepare for his coming, not only the final coming but his coming anew to us this Christmas.

"Be careful not to let yourselves become occupied with too much feasting anddrinking and with the worries of this life, or that day may suddenly catch you," Jesus says in Luke 21:34.

I have already overheard several times conversations like, "Oh heck, I've got to get shopping. Only 5 weeks more shopping days until Christmas."  "Let's not plan anything else at church, you know how busy people are at this time of the year this is."  I saw a woman in the street recently wearing a sweatshirt that said, "Don't get in my way. I'm Christmas shopping." And from the pace she was setting, I don t think you would want to get in her way!

I read about a home that was buzzing with the busyness of Christmas and one little girl just seemed to be underfoot, doing what she could to get attention. Her mother, not too pleased with her little one, puts her to bed. The mother stood
at the door while the little girl said her prayers. Part of her prayer went like this, "Forgive us our Christmases, as we forgive those who Christmas against us."

I feel a bit more sympathy for old Ebenezer Scrooge when he said, "Christmas. Bah, humbug!" as I’m sometimes not quite sure what it is that is being celebrated.  I just don t think it's Christmas. Somehow something gets lost in the hectic busy-ness of our feasting, and drinking, and shopping...we can get so busy that company comes, this very special Company, and we are not ready...our time, our attention have been elsewhere...  So Jesus tells us, "Be on watch..." (Luke 21:36).

We never did know exactly when Uncle Charlie would come during the holidays.  He liked to surprise us.  I as a kid was always on the lookout.  Is that him?

This is the message here. "Company's coming. So be on watch. Keep a lookout. Live expectantly. Live in anticipation. Expect to encounter the Christ anytime, anywhere. For the Christ comes at times and ways we may not expect."