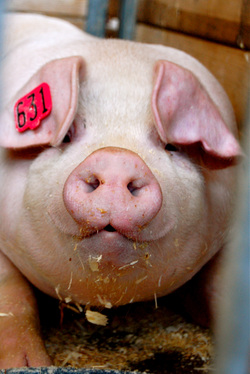 Pig was lamenting his lack of popularity. He complaint to cow that people were always talking about cow’s gentleness and kind eyes, whereas his own name was used as an insult. Pig admitted that cow gave milk and cream, but, he maintained, pigs give more.

“Why,” the animal complained, “we pigs give bacon and ham and crackling and bristles and people even pickle our feet. I don’t see why you cows are esteemed so much more than us.”

Cow thought a while and then said gently, “Maybe it’s because we give while we’re still living.”

The offering of sacrifice was a universal way of doing things in all the religions of the ancient world. This wasn’t what the less civilised peoples did, like the tribes of Spain, Gaul and Britain—no, it was the normal mode of worship in the sophisticated cultures of the Greeks, the Egyptians, the Jews, and the Romans up to the time when the Emperor Constantine was converted to Christianity.

Sacrifice is an almost universal part of humanity’s response to being alive in the universe: to make an offering to a god, to sanctify an animal or food by burning it on an altar. Our scriptures are full of references to sacrifices. This is part of humanity’s way of thinking and doing.

The distinctive thing about Christians in the ancient world was that they refused to sacrifice; indeed they were prepared to die rather than offer a sacrifice. The world around them despised and hated them for their atheism.

Sure the Christians had the language of sacrifice—like “sacrifice of thanksgiving”—but they utterly rejected the practice, and they quarried the scriptures for criticisms of sacrifice and its abuses and linked those criticisms to their own worship: “Sacrifice to the Lord is a broken heart, sweet savour to the Lord is a heart glorifying its Maker.”

It wasn’t the blood of bulls and goats that was needed, but the spiritual offering of the Church’s life of prayer and praise and adoration. it wasn’t the burning of the first sheaves, but the Christina’s offering of holy and faultless lives in the moral sense that counted. All other ways of understanding and doing sacrifice was utterly rejected: Christ’s sacrifice had done away with all forever.

“Those who honour me offer a sacrifice of thanksgiving.”

In what we do here we join our early Christian forebear in offering the first-fruits—gifts brought and dedicated to render thanks and praise to God the Creator, and not then crudely destroyed by fire but given away in charity.

But if harvest celebration is an exception in our lives—a rare and occasional practice—then we make our lives unlike our Christian forebears and reduce what we do to no more than a pagan sacrifice. Harvest must not be a ‘one-of’ things; it has to be a sign of our constant attitude to living—every single day, every single hour we offer to God because every single day and every single hour his redemptive grace is hours.

In the part of the second letter to the Corinthians from which our reading came Paul had been praising up the Corinthian Christians to others, confident that they would give generously to the needy Jewish Christians in Jerusalem. In the passage we heard it seems that perhaps Paul was worried that they might not live up to his expectations so he presses home the point that giving is a fundamental part of a genuine response to God in Christ. For the Corinthians and for us, giving is an outward expression of an inward conviction—live giving out of a live faith. The people of God are a giving people—not one or twice a year, but day in and day out.

According to Paul, this giving achieves wonderful things for three different persons:

For others: it restores confidence in humanity. Receiving a gift overcomes bitterness and anxiety.

For ourselves: it guarantees our Christian profession and links us in prayer and love. Generosity is the way to union.

For God: it brings joy, making prayers of thanksgiving ascend to heaven and glorifying him. And that’s what turns others hearts and thoughts to God.

Christians are a giving people:

because he gave himself for us.