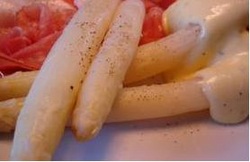 [This sermon uses food and the stength of memories associated with it as a way of examining what 'each heard in the native language of each' means. It looks at cultural particularity in the light of our calling to be the one Body of Christ. The stories used are very personal but I hope not too closely focussed on the speaker]

In the Dentist’s waiting room flicking through magazines you’d never buy you stumble across things. It was only three paragraphs. The headline was “Final Reunion.” But Gustav won’t make it. He died years ago.

When I remember Gustav, I think of spargel – white, thick, juicy stems of asparagus. I knew so little of Gustav, so little of his world, but what I knew was a gracious and talented person who was a blessing to this world that gave him birth. Can there be a better memorial to a person than that he was a blessing to those with whom he lived? Gustav and asparagus. With the Spirit’s aid old men dream dreams and share their visions.

It’s strange how things get linked together in your mind. This forever in your imagination and memory linked with that. I think of my Grandmother Maud and I can smell the Eve’s pudding, in fact I can taste it. All these years on. In fact the memory of the taste gets stronger.

Have you eaten Eve’s pudding cooked in a coal fired oven, like my Gran made? The top golden brown and crunchy, the inside light, fluffy and yellow with a hint of vanilla, and the Bramley apples from the orchard pulpy and steaming–just tart enough to bring a shudder to your tongue. The food of the gods!

And in the memory of that pudding a thousand other remembrances of Maud come alive. I can see her blacking the grate. I can see those earthenware basins she cooked with. I can see her cottage. I can hear the echoes of the Edwardian world she grew up in, where she learnt her cooking, and her ways, and her care, and met my Grandfather. All that and more in an Eve’s pudding!

Did you notice the Spirit’s gifting is to each one individually? I don’t remember the generic gifts of ‘grandma-ness,’ I remember Maud and the blessing she herself was. So it is with Christ, one body yes, but each of us part of it as our unique and individual selves.

It’s strange how things get linked together in your mind. But perhaps not so strange. Food becomes part of us. Food links us to one another, for not one of us is self-sufficient in food. Food roots us in the earth. Food concerns us everyday, literally the meat and potatoes of our existence. Even in this era of globalised markets, fast food, and air-freighted vegetables, food remains very particular. Food is a cultural thing. I eat this and I don’t eat that, not because this is wholesome and that isn’t, but simply because in the bit of the world I was brought up in that’s what we do. Food discloses who we are – even to our selves. It’s a kind of language, and like any language it means many things and different things. Those who learn another’s language of food never knows it quite like the native eater. On that Pentecost day each heard in their own language. Heard in words that got right to the inside of every one of them.

I’ve only eaten snails once. It was when I was a sixth-former. We had a French student visiting. Michelle, as I remember. She danced on the table in the pub and I was in love. I would have done anything to impress her. So I had snails when we went out to dinner–every joint in my body was clenched tight as I forced six down. And Ken got the girl anyway! Food discloses who we are–even to our selves. Food is a cultural thing. And what I understand from that first Pentecostal outpouring is that God does not despise the particularities of our cultures.

At college, a couple of us with African experience were asked to prepare a typical African meal for the whole college. Once a week we had what was called an austerity lunch–a very simple meal, usually bread and cheese – with the difference in cost between that the usual meal given away to a good cause. For some reason I can’t now remember it was thought appropriate that this particular week African food should substitute for the bread and cheese. My friend and I trawled the ethnic delicatessens of inner city Birmingham until we got the authentic ingredients: sudza with peanut butter and cabbage.

It was a meal we had both seen eaten many times, but it wasn’t what our fellow students were expecting. Sudza is simply maize meal cooked until the porridge turns firm, almost dough-like. And the cabbage, just boiled with peanut butter mashed through it, sitting on top of the sudza. No one was prepared to admit how unpalatable this bland fare is–the plates returned empty, but in the days following the cleaners complained of find large dollops of glutinous pale yellow stuff in waste paper bins all over the college. Food discloses who we are–even to our selves. Sometimes we don’t realize how we are constrained by our upbringing. And when we do realise it we often find it hard to admit.

Where’s Gustav got to in this story? you’re thinking. I haven’t really strayed – you see the second or third time I met him was at his own house. Home is where we’re native, where the particularities, the tastes and flavours of our lives are made real, made tangible in objects and organisation.

“You must come for a meal,” he said. “What may we serve you, what would you like?” In a fit of bravado I said, “Oh , something very local please, something traditional, something that is very typical of the place.” “Something we had when we were small, a dish we grew up with, yes?” he said. I replied, “yah.”

We arrived late afternoon. As I said, it was the first time I had been to his house, a narrow, three-storey city dwelling, mid-terrace.

What struck you as soon as you went through the door were the paintings, everywhere paintings, Gustav’s initials in the corner of each one. The city has a well-established artist’s circle with something of a national reputation, and Gustav was one of its members. Every year Gustav exhibited with them, but unlike his fellow artists he never offered any of his works for sale. Hence the house—full!

And in every picture – light, blazing light. The lamps glaring across a brilliantly moonlit river. The sun bleaching the sky and the cable cars in the summer park. An abstract spiral of jewels, as if you were looking, if it were possible, into the sun itself. Light, always light. He never explained to me his paintings. What was it the artist said, “If I could explain them, why would I paint them?” Every language means more than what is said.

It was only after Gustav died that I saw his one picture without light: all black and smoke, and rolling shapes on an inky sea. And centre picture, a ship’s keel almost upside down, one end under the waves. In the Dentist’s waiting room I could see the picture in my head as I read:

Members of the Scharnhorst Association are to hold their final reunion at Wilhelmshaven in Germany on October 9-12 to mark the 60th anniversary of her destruction at the battle of North Cape on Boxing Day, 1943.

The Bordkameradschaft Scharnhorst has issued an invitation to all British veterans of the Battle to attend. Britain’s last battleship action was vital for the Allies as the ship was regarded as the German Navy’s happiest and most effective surface warship.

Then I understood, a little. In his language of paint, Gustav let us glimpse light for what it is, asked us to see it as a gift, asked us to value it, treasure it even. We can never know the deathly grip of the Arctic sea, its intense, gloomy rage. His experience a different world, and yet enough was said, in paint. It came back to me so strongly as I heard Peter’s words, “The sun shall be turned to darkness and the moon to blood.” I knew so little of Gustav really, and yet what he shared of himself was enough to let me glimpse something profound and life-giving. Where the cultural boundaries are often so hard to cross, where indifference or even hostility too often mars what may be learnt and shared, he spoke his own language in such a way that I could hear in it echoes of my own. In this blessed body that is the Body of Christ we hear our very own language and we hear its echoes in tongues foreign to us. We feed on food familiar and comforting, and we savour strange tastes we had not imagined—for though we are many, we are one body.

So, we were in Gustav’s house. Hot strong coffee and a feast of fruity cakes. Cherries and apples and apricots adorned sponges and pastries awash with cream and crispy sugar. “A little more?” “Why, yes please.” Sundowners followed an hour or so later–very thin straight glasses for beer I thought, but as I realised how quickly they were refilled and how strong the local blew was, their shape and size began to make sense!

Then dinner. We sat at a table, immaculately laid linen, fine china. Something traditional we’d asked for. Our host carried to the table a huge plate, steaming. A mountain of sauerkraut, adorned by pig knuckles, skinny pink and even a little hairy! Did my face betray my dismay? Did a micro-second’s hesitance communicate itself, wordlessly, to our generous host? I don’t know. I only know that my embarrassment was saved by spargel – hot asparagus and lean ham, with mild mustard and pepper. Easy eating and delicious, and traditional too, though perhaps not quite as traditional as sauerkraut and pigs knuckles. Grace shown to a foreigner.

Food discloses who we are. God feeds Christ’s one body on earth with the food of heaven. Particular people with particular tastes, drinking of one Spirit.