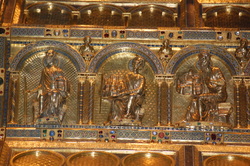 Shrine of the Magi, Koln
As newly weds and thinking believers my wife and I decided we wouldn't give  each other gifts at Christmas.  Each, unknown to the other, bottled out on Christmas Eve and went in a great rush to buy a gift as the shops were closing - Christine ended up  with a cook book - she hates cooking.  I ended up with a very elaborately patterned chunky pullover - which came to be known in the family as the Swiss Skiing Instructors pullover - I loath bold patterned pullovers!  In our  naïveté we had misunderstood what gift giving is about. Our sympathy with the idea that consumerism has got out of hand blinded us to the more fundamental things  of gift giving. And fundamental they are - every human society knows something of gifting, and it serves many important functions.

Let's focus on just two - the givers and the nature of the gifts.

The givers are magi - astrologers, soothsayers, philosophers, teachers of wisdom, readers of signs and times. What are their modern equivalents? Might we say advertising designers, marketers, manipulators of information and fashion, the consumer pundits of our market society - they are present in so many places, universities and politics as well as retail, trading  and investment; there are Magi in pulpits too!

There is money to be made out of it, of course, there is gold to be made out of it. So there at the very beginning of the gospel story in Matthew the things of wealth and power are involved, invoked.  Gold represents political and economic power - the kind of power wielded by Herod; gold represents the kind of power gained by astrologers; gold represents, for that matter, the power which is gained by human enquiry and human enterprise of any kind. It isn't that all gold is dirty - but that its draw is such that it always brings with it the possibility of corruption and  wrong use...... So at the beginning of the Gospel story there is this account of how the power of gold and all it represents is offered to the King of Kings, who is the local neighbour, the struggling, crying infant, in this insignificant little place Bethlehem (so unlike powerful Jerusalem).

It is not just by chance that it is the Mother of Jesus who  declares with great joy that the proud are being cast down, the mighty are being brought low and the humble raised. She has the insight, the incense-insight to  see that things are being cosmically upset because she herself as an unvalued, wageless young woman, finds that she is valued and that something is starting  here in me who does not matter, in me who am insignificant, in me who am one of the unimportant, one of the unwise, one of the unmighty - not a magnus. Now this  is at least part of the realm of incense because Mary, for instance, cannot offer gold which only the wealthy can …

The Gospel story is again and again the story of the little people, the ordinary people, the common or garden people -Jesus does not network in the right places, the places where the magi have influence and power, the places of imperial authority or kingly rule, of political and economic authority.  He does not build a political movement amongst the movers and the shakers - no he consorts with fishermen and washer women, aged widows and blind beggars.

And the final scenes will be no more spectacular either - sit and think of the Resurrection appearances - a rather inconsequential series of encounters that formed part of the story of Jesus - nothing coherent, nothing  organised, no achievement, no reliable body of people. .... As a biography of a dead man it is almost contemptible - Julius Caesar had more to show for himself. The Easter affirmation is that the whole process is worthwhile and that each of these bods in these little stories: the daughter of Jairus, the woman with the haemorrhage and Bartimaeus and the obstructive disciples...... all have their validity within the total fabric of salvation. ....Death is swallowed up in victory.

And that brings us to the last gift - the spice for dressing a dead body - myrrh - the fatalism of death tells us that we are the products of our  racial identities, our economic circumstances, our conditioning, our parenting, of psychological determinism - that is all you are, says death. Death locks us into our places - hems us in, confines and ultimately imprisons
us.

No, says the gift. The offering of myrrh means that even death, the most rigorous and unavoidable shaper of history is offered and accepts its limitations in face of what God does in Christ. Until myrrh is offered there is
no questioning of the finality of death and the authority of death …. With the  coming of Jesus that all changes.

So the Magi cast before Jesus their powers of wealth and religion and 'the-greatest power of all, in its effect, death. And they receive a  warning; in a dream not to keep faith with the political alliance that made on  their way to Bethlehem, and they go home not via the route of Herod, and not via the route of religious authority, not relying on their trade of fatalisms and  elitist erudition, no they go home another - that other way is the way of the Gospel.

Does this understanding of the gifts come to you as strange and new - I hope not for it is a very, very ancient way of reading the story of the  magi, it goes right back to Saint Ignatius of Antioch at the end of the first century, he was one of our Christians forebears who was thrown to the lions in the Colosseum in Rome. According to Ignatius these gifts declare the defeat of society, superstition, fatalism, magic and death.

These magi and their gifts tell us that the gospel initiated in this child ends the determinism that holds us bondage, we are free; free to be the children of God.

Truth in its beauty, and love in its tenderness,
these are the offerings to lay on his shrine.
Trust for our trembling and hope for our fear.

Acknowledgement: this homily is a reworking from notes taken of a sermon delivered in the 1970s by John Davies, later Bishop of Shrewsbury.