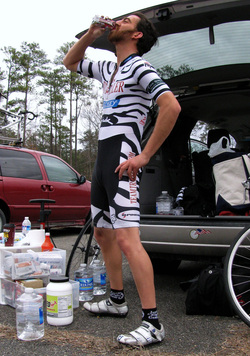 Consumers  could be wasting their money on sports drinks according to researchers at Oxford University. Another one of those sports related investigations for this sports crazy summer. According to a BBC report the
investigation into the performance-enhancing claims of some popular sports products found "a striking lack of evidence" to back them up. And yet we still  buy those drinks to energize, rehydrate and recover after
exercise!

We look to food to cure our ills. We look to food as a solution to our problems - that comes naturally to us. And that includes everything from the ‘comfort foods’we eat when we're  depressed, to ‘health foods,’ which we probably wouldn't feed the dog, and to the broth, or whatever, that your mother fed you when you were ill as a child. In our home it was egg custard. Whenever anyone was sick there was always egg custard. I still yearn for egg custard when I'm not feeling well. If we could but find the right diet, everything would be okay – we would look better, feel
better, live better. Think of those things labelled super-foods. Is the humble blueberry, or whatever, really so wondrously potent?

Yet maybe the health food marketers are on to something. Didn’t it all begin with a humble fruit in the Garden of Eden? When in their rebellion our forebears Adam and Eve grabbed the super-fruit which was the only thing denied them, the consequence was banishment. They were cut off from the life-giving tree by flaming sword. It’s as if we’ve been trying to get back to that fruit ever since. The wonder diet, the super-food, the therapeutic rehydration glug, is a searching for the fruit of the Tree of Life rewritten. How may we find the fruit of that tree which we may eat and live forever?

And the Gospeller John, in the highly symbolic language he so loves, points us to another tree. For John the tree of
life is the tree of the cross, whose fruits are the flesh and blood of Jesus Christ. Eat this food and you will live.

Jesus speaks of bread - the Bread of Life, true and living Bread sent from the Father which gives life to the world. Here
is the only Bread on earth which a person may eat and not die; a bread that gives the eater eternal life – the promise of being raised up on the Last Day. This is bread that has no equal; a bread superior to any other. It’s even superior to the heavenly manna that fed the people of Israel in the wilderness for forty years. As Jesus will say later in the chapter, ‘Your fathers ate the manna in the wilderness, and they died. This is the bread that comes down from heaven, so that a person may eat of it and not die.’

This is highly symbolic language for sure. For Jesus to say that He is the Bread of Life is to say that no one can live
without him, at least not forever. And that's the point of it all. Just as you draw on bread for daily life, so you must draw on Jesus for eternal life. It is a symbolic but simple way of speaking. If the language stayed there – stayed with symbol and metaphor and parable – it would have been fine. But there comes  a moment when the picture language assumes a power beyond these figures and shadows. Metaphorical speech gives way to the real thing. Bread talk must give way to flesh and blood talk.

It's a little bit like the father who sits down with his son and says, ‘I'd like to talk with you about the birds and the
bees,’ and the lad looks at his father with a puzzled expression and says, "Birds and bees! I thought we were going to talk about sex.’ There comes the point when it's time to ‘get real.’And in this encounter described by John that  point is getting ever closer – it will be described in the Gospel  passages over the next few Sundays. But for now the compilers of our lectionary make us stay with the metaphor. So let us stay with it.

She was outraged, indeed scandalized, and wanted me to be clear about that, she wanted me to refuse to present her nephew for confirmation by the Bishop. He was about eleven years old and I was the person taking the preparation classes.  What had so outraged her?  Well, the lad had let slip that his sole reason for wanting to be confirmed was to be able to taste the wine!  His aunt, his godmother, was outraged.

Jesus the Bread of Life known by us in a tangible way in this feast of bread and wine; the Holy Communion; sometimes called the Holy Mysteries, and mysterious it certainly is. Gospeller John’s language style fits perfectly. How can a wafer thin fragment and a sip be a feast?  How can bread and wine be body and blood? How can an itinerant first-century
preacher be present in a twenty-first century action? Mystery indeed. Language is stretched here. None of us can fathom it; yet in another sense it is as plain as plain can be. Like the play acting that comes so naturally to a five year old, we play act; we play act what God does, what God is doing, in this  world.

Do you know the consumption of ordinary, standard bread can be predicted by the state of the national economy? The more people there are out of work and the more business that close, the more white bread is eaten. As unemployment declines and shopping and consumer credit increases so the consumption of white bread declines. Bread is common stuff; stuff to see you through hard times. So too wine. Yes, it can be flash, expensive and fashionable, but at heart it's simply
made and for much of humanity's existence safer to drink than easily contaminated water.

It's not hard to see what these two things signify: a fertile world and the bounty of nature; production and the skill of grower, baker, wine maker; the things of enterprise, good and bad, - grain that could have been bread for many fed to
cattle to fatten them for the rich, luxuriated wine when so many can't even get clean water; staples that keep us going - bread to meet our hunger, wine to gladden our lives.

Common  stuff of living and God through Jesus takes them and transforms them into the  new things of his kingdom. Bread of life indeed! Like any good craftsman, God takes ordinary things and shapes them into something wonderful. He is not
jealous with his skill. He shares it. He takes, he blesses, he breaks, he gives. And he is generous enough to call us his body that through us his action might be known in the world. Bread and wine are taken off the tables of our daily  lives and put into Jesus' hands to be transformed into what he meant all things to be – a direct means of contact between humankind and God.

This  bread and wine are samples of us; our lives and personalities summed up in them, that through Christ's action our lives may be given back to us, no longer simply our own but his Body - part of the redeemed and redeeming community, bound in  life and death to our Lord. So the material that is really being worked on in this craftsman's shop is really our
selves.

The  Eucharist is the workshop of a new world. Here and now our Living Lord comes to his own as he promised and eats bread and drinks new wine with us in the Kingdom of Heaven. Here we have a foretaste of the heavenly banquet prepared for all humanity. Here in the old order we taste the power of the new order. Here we experience the transforming power of Christ to turn common things into holy things. Jesus said to them, ‘I am the bread of life. Whoever comes to me will
never be hungry, and whoever believes in me will never be thirsty.’

His aunt was scandalized that his only reason for being confirmed was to taste the wine. But is it so scandalous?  Don't we
all yearn to simply taste the wine of God's  kingdom?


An offertory invitation by John Westerhoff:

Sisters and brothers, I invite you to bring your lives in their
brokenness and incompleteness and lay them in bread and wine on Christ's table,
a sacrifice holy and acceptable to God; that in this holy Eucharist God might
take your life, transform it, and give it back to you made whole, infused with
the life of Christ, that you might go forth to love and serve in his name.