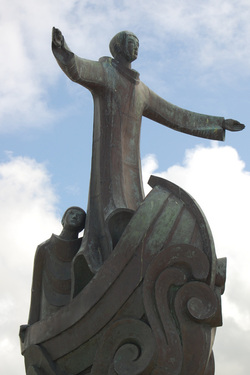 This is the only place in the Gospels where Jesus is unmistakably and unequivocably addressed as 'God.'  Yes, there are other places where terms like Son of God, Image of  God, Word of God are used - but here alone, it is simply 'God' (verse 28).

You can catch a glimpse of its importance in the way the word is abused now. 'My God!' in the shops and on the streets often means some deep emotion is being expressed -  a splendour of the natural world; on hearing bad news; on being involved in a mishap - 'My God' - a momentary exclamation to convey feelings of surprise, terror, or awe.  No other expression seems to do.  A deep, heartfelt response, but of the moment.  And that exclamation leads to its' careless use in common profanities. But there’s nothing momentary or profane about the response that Thomas makes.  No, here it’s devotion, it is his soul being touched by the sublime.  This is a response that will change his life, direct his life.  It is the response of recognition - sudden and awesome and compelling.

The British journalist and agony aunt Virginia Ironside has spoken and written compellingly of the troubles she has faced.
Before hearing her personal account Ihadn’t realised that her life has been mark by much tragedy, in particular many of the people very close to her have been chronic alcoholics, and she herself is victim to recurrent severe bouts of clinical  depression.  When asked whether counseling has made any difference to that depression, she has replied that it hasn’t brought her any miraculous cure, but it has enabled her to recognize what's going on inside herself and that is one of the  keys to recovery. In other words, recognition is fundamentally important in dealing with very hard things.

I’m certain she’s right, not just about personal feelings and illness, but every area of life. When we recognize some
truth, we cannot unrecognize it.  It’s a part of us.  Even if it is a painful truth, the discovery of someone’s deceit or a fact that destroys previous convictions, it remains a part of us.  There is no going back.

And so it is with Thomas, but for him the recognition arouses great joy, and the gospel writer wants us to be very clear about that, indeed to experience it for ourselves.  John the gospel writer gives us the framework to make it our own.

What John is decribing is Sunday - the day that will be marked in the coming centuries as a memorial to the resurrection.
The doors are locked, but nothing can keep out this experience.  The community of faith are met together.  It’s in a group that beliefs are nurtured.  So much in our modern outlook tries to deny that, but it remains true.  Our faith is shaped by the phrasing of the liturgy … by the resonance of hymns .. by the example of Christian people whose convictions and encouragement remain part of our memories. That’s how it works, thank God.

But there’s a danger, of course.  The danger is that we might, even in our culture, unquestioningly accept the norms of the group and conform to its pattern. But John the gospel writer will have none of that. Thomas retains his individuality crowned by his exclamation of personal faith as he cries, 'MY Lord and MY God!'

We are part of a group.  We belong to a living tradition.  We are dependent on each other, but we cannot live on the faith of someone else -  not for long anyway.  We have to see for ourselves.  And that is what Thomas does.  He sees in the
wounds of Christ the love of the living God.

Thomas usually described as a doubter.  That does him less than justice.  Doubt is not the opposite of faith, it is certainty that is the opposite of faith.  Thomas is a person of perception - in some ways he sees things clearer than the others.
Do you remember that when Jesus, in response to a woman’s call for help on behalf of her brother, decides to go to Bethany in Judaea, an area of increasing hostility, it is Thomas who say, 'Let us go that we might die with him' (John 11.16).  Thomas is quite clear, in a way that the others are not, that discipleship calls for a willingness to be vulnerable to the point of sacrifice.  He knows that the glory of God is expressed in the frailty of human flesh, in service, in dying.  Today in the closed room Thomas’ exclamation expresses this recognition of the eternal nature of God - a God who loves.

And having recognized that, Thomas doesn’t stay there on his knees. He doesn’t turn Jesus into an idol, or his discovery into a cult.  Already there is a movement at work, and another giving of the Spirit is described. Jesus breathes on his disciples and says, 'Receive the Holy Spirit'  (verse 22). Here is an echo of the Genesis story where God takes the clay of the ground, dead soil, and breathes life into it.  Those disciples were like dead people, locked in their tomb of regret, until they too share in the spirit of Christ.  Now Thomas was going to join them to become the continuing instrument of God in the world and to play his part in bearing the wounds of sacrificial love.

The Scottish minister and academic, A. J. Gossip, used to tell the story of a young soldier with whom he had served in World War I. The lad failed, through sickness, in the face of the enemy, and was court-martialed and punished. But his colonel said to Gossip, 'We must show that we still trust him.' The young man's failure was never again mentioned and the earlier warm friendliness continued. Returning to the horrors of trench warfare, the young man showed immense courage, won honour upon honour and received  promotion. When congratulated he said, 'What else could I do? I failed him; and
he trusted me.'

Christ's disciples received very similar, but much greater, trust from their Lord, whom they had forsaken on Good Friday, when he came to them on the evening of that first Easter Day. Ten of them are locked in that Upper Room; terrified, ashamed and bewildered. Jesus reassures them by offering his peace and showing his wounds. His greeting - 'Peace be with you' (verse 19) - is the conventional Jewish one, but rich in meaning, really saying, 'May you be entirely whole.'  It is in this that Thomas is leaping ahead of his friends.

Then he showed them his crucifixion wounds. It was proof of identity, but much more. Whatever form the resurrected, eternal person of Jesus had, it still carried the marks of his suffering, his self-sacrificing love. What he was for them so lovingly in his passion and death, he still was for them - and for all people - and for ever. He is always self-giving love. Small wonder this reassurance made his disciples glad (verse 20).


Then he commissioned them: 'As the Father has sent me, so I send you' (verse 21). The commission was to them in their 'togetherness,' as his community of faith, but it has to be recognized and owned by each one of them for them to be a continuing part of that missionary community. As such they were to continue his mission of love. Their mission was an extension of his. God's saving work comes first in the incarnate life of Jesus and continues through the risen life of Jesus present in his faithful followers. It was all one and the same work - the Father's offer of transforming grace. This we have to recognize.  This astonishing commission is entrusted today to our unworthy hands. But with the task came the
empowering. He breathed on them and said, 'Receive the Holy Spirit.'

We are commissioned.  But all is within that quality of God-love that Thomas so forcefully recognizes.  This community that is the church is at its truest when it expresses that love. At a funeral of a man who had been a missionary in Africa, his son -  a teacher -  reflected that his school is so proud when one of the youngsters volunteers for service overseas.  But he added, 'When they go, they go for a year; when my father went, he went for life.'  A wholly different level of commitment.  That was what recognition prompted in Thomas.

And what of us?  What of the local church, where love is not so dramatic, but where there is a cost in quiet, hidden ways, in being faithful and in sustaining and supporting each other?  Isn’t the expression of this God-love just as fulfilling, just as life-changing, just as sustaining?  Whenever we gather around the table and share the bread and wine of communion we are reminded of the wounds of Christ and are witnesses of his glory. The risen Christ is present here, now, to reassure us with his peace and love; to send us, empowered by the Spirit, into our broken world with the Father's forgiving and transforming grace.  Let the recognition that was Thomas’ be ours, 'My Lord and my  God.'