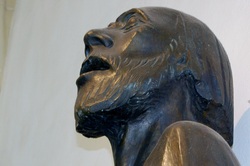 There’s something  mesmerizing about gambling. I once had a boss who was so convinced of a tip he’d been given about a particular dog race that he took a shoe box with him to the race meeting to bring his winnings home in. Needless to say the dog didn’t win! Yet he had been so convinced; so certain, mesmerized by the possibility and unable to recognize the reality of his chances. No wonder it can be an addiction.

The story is told of a compulsive gambler who lost so often that even his bookie felt sorry for him. When the gambler kept insisting on betting on one particular horse, time after time, the bookie told him, ‘You're throwing your money away. The odds on the horse are 150 to one. That animal has no chance.’ But the gambler wouldn't budge; his conviction unswerving despite all the evidence to the contrary. In exasperation, the bookie said, ‘Look, I will personally give you million-to-one odds on him, that’s how certain I am that you’ve no chance.’ The gambler’s immediate response was, ‘I'll take those odds.’ You guessed it, the horse won the race. The gambler returned to the bookie and began stuffing fifty pound notes into a suitcase. The shocked bookie noticed, however, that the winner still looked sad. ‘What's wrong?’ he asked. ‘You're walking out of here with the biggest prize I ever saw anyone win, and you still don't look happy.’ The man responded morosely, ‘I've been betting on horses all my life and never had much luck. At last I win a race on a million-to-one shot. And what have I got on it? A lousy two quid.’ His new found wealth didn’t satisfy him – so mesmerized by chance and its’ possibilities the win was not enough. His outlook on life was completely askew.

A life askew – that’s Dives alright. In fact that name isn’t a name at all; it simply means ‘rich man’ in Latin. It’s a description of the state he’s in, rather than an expression of him as a person. We can identify nothing about him from this label, other than his wealth. But the other person in Jesus’story has a real name – Lazarus – in Hebrew Eleazar, literally ‘God is my help.’ Yet he seems, at least in life, to be far from being helped. What are we to make of this strange juxtaposition: the rich man with no name and the poverty-stricken one who has a name that seems perverse?

Perhaps what the gospel writer is getting at is the mesmerizing quality of wealth or its anticipation. Our vision so obscured by wealth that we fail to see what is does to people; and we fail to see also those who entirely miss out on life’s wealth.
If the unfortunate poor do come into view all we can muster is a distancing pity. It’s as if Jesus is saying to us: ‘You’re being mesmerized; snap out of it, see things as they really are.’ It’s all too easy to trust wealth. ‘Look instead to the poor,’ he says, ‘and there you might learn something that will change everything.’ This Gospel actually focuses on the poor – what a strange  place to begin life in all its richness. Last week’s parable of the dishonest manager sounded so odd that some people wondered whether I was making it up – this week’s parable is so much more familiar – but its’ very familiarity robs us of understanding that it is also difficult and scandalous. This Jesus is hard to get alongside in these stories – these parables are strange and  difficult.

Now Luke the Gospel writer isn’t against wealth. Far from it, we might suspect that  as a doctor his own living came from those wealthy enough to pay for his  services. And in the Acts of the Apostles he tells how Lydia, a rich woman,  helped the apostle Paul in his work. Luke isn’t anti-wealth, and he doesn’t tell  the story of a Jesus who is anti-wealth either. It is more subtle that that.  It’s about the way wealth mesmerizes, skews a person’s life, and threatens a  person’s very soul. Hence Paul, in his letter, warns Timothy to beware of those  false teachers who are content with their wealth. The ones who feel themselves  so rich in the good things of life they don't need God; but in the end their  self-sufficiency will not save them.

Dives  just didn’t see the poor man Lazarus at his gate. So mesmerized by his wealth he was oblivious to what was happening, even at the bottom of his drive. He was unable to see what was right in front of him. How often are we just like that?

The homeless people who sell copies of the magazine ‘The Big Issue’have done us all a favour because they have enabled us to see homeless as people. Here’s a person trying to support him or herself; doing something that lets us see them. I think  of an elderly friend, Jean, or her friend Audrey, both of whom have developed kindly relations and conversational opportunities with their local Big Issue seller – quite different from the ‘cross the road to avoid that person’ mentality, or the attitude that blames the homeless for being homeless. Don’t be mesmerized by the wealth you possess. See those around you as the people they are.

‘Money,’ said Bishop Helder Camara of Brazil, ‘has a dangerous way of putting scales on one's eyes, a dangerous way of freezing people's hands, eyes, lips and hearts.’ It’s that hard shell of indifference; the mesmerizing vision that blanks reality out; and the skewed take on the world that reduces others to nothing more than a problem to walk around.

Watch out, says the parable, your outlook gets skewed and you don’t even notice. If  you’ve ever walked through a street market in Africa you will have noticed  wealthy tourists battering with poor craftsmen and women as if their very lives
depended on it! As one Zimbabwean soap-stone artist remarked loudly to another, after a rich visitor had spent ten minutes beating down his price, ‘So I suppose he needs the money more than I do?’ For the tourist it was just a game,
something of pride and a thing to boast of back at the five star hotel. For the stone carver it was food and shelter for his wife and family. The rigour of that battering betrays a skewed take on life. Almost every day, if we're honest, we
walk past a Lazarus on the street, and we pretend we haven’t noticed.

Mother Teresa once said, ‘I would rather make mistakes in kindness and compassion than work miracles in unkindness and hardness.’ I don’t know who told this story, but it gets to the heart of the matter:
It concerns the children of an elderly lady who had recently died. They had gathered at her home to set about closing it up and disposing of her things. One of the children found several of her old cheque books and began to thumb through
them. After each recorded deposit of her pension the first cheque recorded was to her church. Ten per cent every time. Then came cheques for household utilities, food, and similar necessities. Then there were cheques for gifts to
her grandchildren and donations for umpteen charities. The children were deeply moved by the cheque stubs, realizing just how loving their Mum had been in her dispersements. As one of them said, ‘The story of Mum’s life is in her
chequebooks.’

A life written in the stubbs of a chequebook for there we record what we actually see.