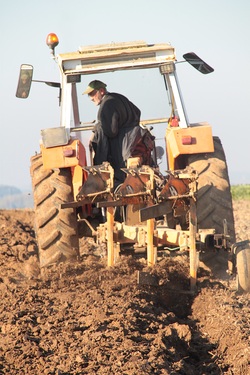 No one who puts a hand to the plough and looks back is fit for the kingdom of heaven.
Luke 9.62b

The children were falling about in giggles.  Every time Zoot the juggler failed in whatever he was trying to do, they roared with laughter. He was performing late at night, only by the light of a street lamp. He’d try and try again to get on that unicycle, he’d try and try again to climb an unsupported ladder, or throw flaming torches.  His ineptitude stoked the children’s delight.  But one trick he attempted only twice, and then hurriedly moved on to another. No buffoonery that turned into a spectacular feat - just a quick passing on, in the hope that not too many
of his audience had really noticed.  Why I wondered?

A couple of years ago, I was lucky enough to have a little circus training, and on thinking about it I’m certain I know why.
You can’t juggle black balls in the dark - for the secret is not looking at what you’re doing, but keeping your gazed fixed on the furthest bit of the equipment or the ultimate place you’re aiming for.  Without that forward looking there’s no way you can do the trick - if you can’t see the highest ball because it’s black against a black sky there’s no way you’ll catch it.  The ploughman looks intently on and the furrow will be straight!

Keep your eyes fixed on the ultimate goal and you will get there.  That sense of concentration and focus is clear enough in a passage written two hundred years before Jesus, another Jesus, son of Sirach wrote,

How can one become wise who handles the plough,
and who glories in the shaft of a goad,
who drives oxen
and is occupied with their work,
and whose talk is about bulls?
He sets his heart on ploughing furrows,
and
he is careful about fodder for the heifers.
So it is with every artisan and master artisan
who labours by night as well as by day;
those who cut the signets of seals,
each is diligent in making a great variety;
they set their heart on painting a lifelike image,
and they are careful to finish their work.
So it is with the smith, sitting by the anvil,
intent on his ironwork.

You can picture it can't you? Engrossed in work, the plougher’s mind fixed on the furrows, the engraver’s on the metal plate, the blacksmith’s on the hot iron between his anvil and his hammer. And when the job’s done - there’s great satisfaction in it. I used to be Vicar of St Peter's Little Budworth in rural Cheshire and for our millennium project we put a glass wall on the bell ringing chamber and on it is engraved a farmer ploughing. The inspiration came from the Ploughing Match held in Little Budworth in 1995.  And what is such a competition about - if it is not delight in skills mastered and jobs well done.  The old words, and we'll use them in a few minutes, the old words used for generations in this service gets
the tone just right:

Those who are intent in their work do of course do exactly that.  Though I rather like the translation that says, 'they give solidarity to the created world.'

This is labour that does indeed bring solidarity to our world.  A sense of achievement, a harnessing of skill, activity with purpose and direction about it, is simply a delight.  "All these blessings shall come upon you…" we heard in our reading.  And we praise God for them - labour, effort, determination, skill; blessings in themselves and the source of blessing.

But there is another side to the issue - of course, achievement and completion and just reward don’t always follow a job well done:

God speed the plough:
in fair weather and foul,
in success and disappointment,
in rain and wind, or in frost and
sunshine.

There’s much to harm and hurt, and justice isn’t always done, and people don’t always receive a fair reward for their labours, and skill isn’t always appreciated, and effort is ignored, and a lifetime’s work can go as if for nothing.
But still the cry goes up -

And every time the shout goes up it encompasses both the delight and the hurt.

This Sunday, Plough Sunday, is always in the season of Epiphany - the season of God's revelation of Jesus as his Son. The
season begins, of course, with Epiphany itself, the day we remember the visit of the astrologers, the magi, to the new born Christ child.  The day we put their figures into the Christmas crib scene.

In 1158 the medieval church thought the bodies of the three kings had been discovered, and their corpses were ceremoniously buried in Cologne cathedral.  In our modern cynicism we probably laugh at the notion, and yet there is
something to think on in it, for it was said that one of the bodies was of a very young man, another of a middle aged man, and the last of a man of great age. So a story grew up around that. It was said that the three kings on arriving at Bethlehem first went into the cave of the Saviour’s birth one by one.  When the aged king went in he found no one there except an old fella as aged as himself. And he felt quickly at home, and together they talked of memory and gratitude.

The middle aged king when he went in, found only a middle aged teacher.  And they spoke of leadership and responsibility, and other things of experience well rehearsed and reflected upon.

Whereas the very young man, when he went in, found a prophet eager in hope, and together they talked of reform, and change and promise.

Later they understood.  That the Saviour we worship speaks to every stage of life: that Jesus comes to meet the needs of us all, rich as well as poor, old as well as young, disillusioned as well as fulfilled, the hurting as much as the satisfied, the
marginalised as well as the privileged, the misunderstood as well as the secure.

I'm uncertain that I can share this experience, but I'll try.  I'm walking the dog, it’s a lovely  sunny clear evening, the leaves are turning but the fields are brilliant green.  I felt well, fit.  I had worked very hard, but felt glad of it.  That day I had discovered some music that had been going through my mind but I hadn't known what it was -  now I was able to hear it all on a personal stereo. Mysteriously a profound sense of belonging, of value, of joy, of well-being came upon me - an utter contentment, an utter thankfulness - I felt rather tearful, nothing to be said, nothing to be done.

Nothing of sadness, or disappointment, or terrible mistakes and hurts, nothing of the follies and worries of my life obscured my vision - something deep inside me was answering something outside of me - reassurance and more.
It's okay.  What someone called 'a rumour of angels' and I know what he means. That complete, happy concentration - you can see it most clearly in a child intent on a game -and it happens.  Thank God!

Blessed shall you be …

The gate of the field is open - with eyes fixed on God’s future.

Dag Hammarskold, that great servant of peace, summed it up well:

For all that has been - Thanks!
To all that shall be - Yes!