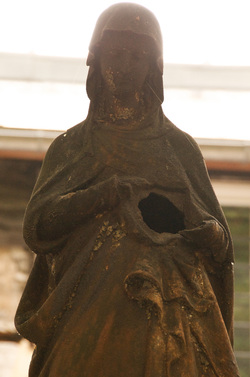 A desert nomad looks up at the sky. The voice of God comes to him saying, ‘Do not be afraid, Abram. I am your shield, your very great reward.’But Abram is disappointed with  God. ‘You have given me no children,’ Abram complains, ‘so a servant, indeed a slave, in my household will be my heir.’Then the word of the LORD comes to
Abram: ‘This man will not be your heir, but a son coming from your own body will be your heir.’ God invites Abram outside and says, ‘Look up at the heavens and count the stars if indeed you can count them.’ Then God makes a promise, ‘So shall your descendants be.’

God and Abram  are bound together by a promise. And this promise from God is of quite a different order to the newspaper columnist’s question about a celebrity’s promise of love. God was and is faithful to that promise. God means it entirely – this is a covenant that God will never break. Today the physical offspring of Abram number in the millions and the spiritual offspring number many times more. How about that as a promise really meant. If it’s true that character is forged and character is revealed by the promises we make and the promises we keep, and
I think it is, then this covenant that God so honours discloses to us the very heart of God. God never makes a promise that God does not keep. And the cross of Christ will be the ultimate expression of that.

But what of the people at the other end of the promise?  We see Jesus set his face toward Jerusalem, the Holy City, in verse 22 of this thirteenth chapter of Luke. And the rest of Luke’s Gospel tells the story of this fateful journey to Jerusalem and the world-shaking events that would take place there. In Lent we make this journey with Jesus. Today we stand and listen to some very sad words from Jesus, words about the Holy City that came from a broken heart... ‘Jerusalem, Jerusalem, the city that kills the prophets and stones those who are sent to it!’(verse 34). These are words about intent; they are words about how promises are not kept.

In Luke chapter 19 (verses 41 and following) Jesus finally gets to Jerusalem, and looking over the city from a hill top, he
weeps for the destruction that it's rejection of God's message and messenger will bring upon it. He says, ‘If you, even you, had only recognized on this day the things that make for peace! But now they are hidden from your eyes. Indeed, the days will come upon you, when your enemies will set up ramparts around you and surround you, and hem you in on every side. They will crush you to the ground, you and your children within you, and they will not leave within you one stone upon
another; because you did not recognize the time of your visitation from God.’ That’s about a failure to live the promise.

Jerusalem is more here than a geographical location, a city. It was the heart of the whole religious and social identity of the people of God, the symbol of their unique relationship with God, a privileged relationship – a relationship of
promise.  Here was the Temple – to this holy place the faithful made pilgrimages to renew their bonds to one another and to God, to keep alive the promise. If any place on earth should have been open and receptive to God's messengers, it should have been Jerusalem. But the very opposite was often true – God's messengers were often unwelcomed and
violently rejected.

Is there anything more painful than offering your love to someone and have that love spurned, spat on and even despised?
And that is really what this is about, the promise of a relationship gone completely awry. This is the parents who have pleaded with children who had chosen a path that would surely lead to great harm, only to be rejected and even
hated for it.  This is the woman who so wanted her husband to love her, and yet, each time she reached out toward
him, the more he moved away, even to the point of open anger and abuse. This is friendship cast aside as worthless, although in previous times it had achieved so much. He cried as he said to me, ‘We were such friends, I valued those
conversations so much, and now he won’t even acknowledge me in the street.’

‘Jerusalem, Jerusalem, the city that kills the prophets …’ It’s very name means ‘city of peace,’ yet that is so often a name of bitter irony. As the people of faith recognized only too well the name was often little more than a sham. God's Holy
City had rejected so many of God's messengers in the past, like Jeremiah and Isaiah, to great doom and regret. And now the city will reject the greatest messenger of all – the greatest love of all. Again we shouldn’t reckon this a condemnation of Jerusalem and the Jewish faith per se. We must always remember that Jesus is a faithful Jew and remains such. Rather his words and his actions are about the broken promises of people – any people –and how we turn our backs on God’s covenant of love – again and again.

Lent is a time that calls us to the hilltop, as it were, to stand beside Jesus and weep with him over broken promises, trust abused, and the potential of love so terribly denied. We weep with him over love denied, potential thwarted, and covenantal destiny thrown away – as if worth nothing. In Lent we weep with Jesus; for our cities, for our country, for our world, for our very selves; for every broken promise and every insincere word.

Within the sight of the city Jesus still weeps. Who can doubt it as we see on the TV or read in the papers every single day the calamities of harm and abuse and violence. The Jerusalem that Jesus weeps over isn’t just that same city, but every city, every place of failed potential, broken promises, and crushed hopes. Isn’t every place Jerusalem? Jesus still longs to gather his chicks and lead them to a blessed life – it is we who fail to gather under those protecting wings.

Jesus’ words over Jerusalem are not an antiquarian interest. Some kind of historical colour to a life lived long ago. We cannot leave these words and Jesus’ heart-rending emotion as a thing of long ago. Instead we must come to appreciate that his breaking heart looks on us as he did on that beloved city so long ago. This is the troubling thought that Lent won’t let us put aside. Jesus stands and looks at each of us; and what does he see? The things that would trouble and dismay
him, that would cause him to mourn? What has he so wanted to give us, but we have rejected? How has he wanted to change, to transform us, but we would have none of it? What word from him has fallen on our deaf ears? What parts of our
lives have we withheld from his mercy and goodness? When have we said ‘I love you’ and not meant it?

For, you see, I am Jerusalem!  And you are Jerusalem too! We break the covenantal promise – again and again – and make fine  justifications for ourselves, but our shams and our shames will out. There is only one who can transform us (Philippians 3.21). Let us stand firm in his way (Phil 4.1) for his promises are always true.