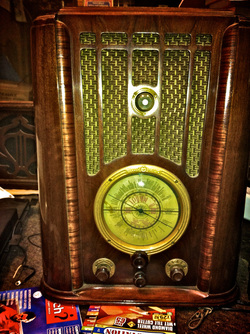 My Granddad loved his radio; his ‘wireless’ as he called it. His radio set was a large wooden box that sat in a place of honour in the corner of the room. It primary use was news, and for closely regulated entertainment at particular times of the day. I guess it was generally used for two hours a day. A large wire aerial in the garden made sure the signal was good, and the wireless was powered by glass wet cells that had to be regularly re-charged in the power shed where there was a generator. You see
my granddad’s home had no mains electricity. Ultimately his wireless relied on a mass of cables and connections and very physical effort and the presence of a diesel generator.

What would he have made of my ‘wifi’ home where phones and computers and TVs and printers are all connected wirelessly?
Where I can turn on the washing machine by phone while I tweet a message to a friend thousands of miles away, who will answer immediately? I read the Bible on  a small coloured screen and behind me the printer whirrs as it churns out my  daughter’s homework send from her bedroom upstairs. Granddad was no stick in the mud. In fact he was eager to learn and use technology to its best advantage, but
for him the wireless was at the end of a long and very physical set up, whereas for many of us wireless –wifi – is at the beginning of a hands-free encounter with the whole wide world.

Our ‘wifi’ world was beyond my granddad’s imagining I’m sure. I think we have to understand ‘beyond imagining’ if we’re to appreciate what this story of the demon-possessed man is about. This story is one repeated in slightly different forms by the Gospel writers Matthew and Mark, as well as what we heard from Luke, so our forbearers obviously thought it
really important and worthy of our close attention. What is the ‘beyond imagining’ that we must work to appreciate – in just the way I try to understand granddad’s wireless world as against my wifi existence?

First, we have to appreciate that for Luke and his contemporaries’ hell and heaven are much closer, much nearer to each
other and to what happens to people, than they usually are in our thinking. In a world where life was very short, and hunger and illness never far away, and there was much to threaten well-being, hell was all too close to everyday
reality. Consequently the world of demons was close as well – those malevolent personal forces that corrupt and destroy anything that stands in their way. This isn’t a strange, other-worldly occult experience; no, this is, potentially at
least, an everyday reality, an everyday threat.

And the demon-possessed man of our Gospel reading makes all that very plain. He is a person who is fundamentally alienated since that alienation, that possession, inhabits his whole personality and being – his own will, his own speech, his own very self. It is as if his whole being – mind, body and soul – is populated with images of destruction and terror. This
is something that goes beyond the man as an individual. It touches the very core of what it is to be a human in relationship with other humans because it goes to the core of what it is to be human. It is about disorder in being that changes
the very order of being – the human becomes inhuman. This is way beyond the things of illness and disability; this is the disordering of that which is fundamental to the ordering of life: demon-possession – chaotic, terrifying, and dismaying. Hell is being experienced there in front of them – it’s that close. What is normally bounded by death has broken free to invade the land of the living.

Second, the Gospel writers are certain that Christ has a unique power to cross this awesome boundary between death and
life, hell and heaven, in a way that frees his people from its terrors. Indeed more than that, Christ reduces the power of death in a way that the boundary no longer has about it a fateful determinism. The people thought that boundary
hellishly close, and the demon-possessed man’s behaviour only reinforced that terror. But Christ crosses out that boundary, not to let the forces of death have free reign but so that their threat is seen for the puny reality it actually is. Christ enables the reality of that hellish terror to be seen; in disclosing it he overcomes the alienation – the sin – it produces. In other words, Christ brings heaven to earth in place of the all too near threat of hell. The forces of hell are named and identified by Christ and in this disclosure they are seen for what they really are.

Third, notice that there is a clear distinction made between the man and the demons that possess him. Luke in the
version we heard tries to make plain this distinction (it’s rather more confused in Mark’s account) – the first verbal exchange seems to be between the troubled man and Jesus, ‘I beg you, do not torment me,’ whereas the second appears to be between the demons and Jesus,‘They begged him not to order them to go back into the abyss,’ and they were named in a plural way ‘Legion.’ The man had recognized Jesus’ authority and had taken the initiative – we’re told that as Jesus stepped out of the boat the man approached him. Who is addressing who isn’t always obvious because the demons are always eager to speak on behalf of the man. They are all too ready to deny him any voice, an identity of his own, any will to rid  himself of this hellish menace. But somewhere deep inside this terrifying ordeal a human and humane soul is struggling to be free. This is the one on whom Jesus has compassion –but the demons must be attacked with uncompromising determination.

This is a distinction we must take to heart. It is no use blaming a tormented soul, an individual held in the thrall
of hellish forces. It does not good to blame people for attitudes and behaviour derived from things that upbringing, environment, and social circumstance have imposed on them. Any of us may be corrupted by corporate demons that twist our minds and souls – racism and sexism immediately come to mind. A person can be forgiven; a person can be shown a better way; a person can learn and grow. Demons, to keep with the Gospel language, have to be destroyed. To tolerate
evil, disorder and a hellish take on living is to perpetuate exploitation and oppression. The language of the Gospel story may not be ours but the issues it addresses are real; they are not beyond our imagining.

We know that horrid compulsions eat away at the human soul. We know that evil corrupts our vision and condemns whole
peoples to misery. We know that old hurts go unforgiven and surface again and again to impose their violence and terror. We know that people are driven by forces they feel beyond their control to brutalism in action and outlook. The battle is real and deathly and cruel. Things indeed that we would hope are ‘beyond our imagining’ but the media remind us every day that they are all too real – these things that drive the humane out of the human soul. These things Christ tackles in the healing of the man-possessed.

Fourth, notice that Christ’s efforts with his man are costly. In the story the cost is the destruction of a large herd of
pigs. The news of this destruction spreads like wildfire. Everyone in the district soon knows and they are scared. Can one man’s sanity be worth that much? Who is going to pay for that? Who is going to go hungry because of that? Whose beasts might be next? What’s a swineherd to do when there are no longer any swine to herd? No wonder they want Jesus to leave the district! ‘Get out of here,’ is their angry shout.

Here is a story told in first-century terms – a story that may seem strange and distant to us; a thing beyond our imagining. But with imagination we find within it a  stirring call to face down all that is hellish; to face up to the costliness of
over-turning all that corrupts the human soul; and to trust Christ in the struggle to achieve the humanity that is his intention and gift.