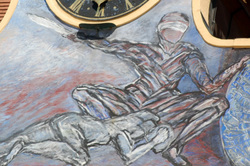 Jesus said to the disciples, 'There was a rich and powerful man who held the highest office of politics and influence in the whole world.  But charges were brought against him that he was overly fond of sex and had engaged in a number of very physical encounters outside his marriage.  So he said to himself, “What will I do, now that they may take my position away from me?  I am not strong enough to dig, and I am ashamed to beg.  I have decided what to do so that they won’t be able to take my position away from me, I will call together the best of my friends and all those who owe their own high office to my power, and I will
say to them, “With great care and subtlety of language I intend to refute this accusations whether what I say is true or not, and you will stick by me, no matter what is said, for I know everything about everyone one of you, and all that I know will go into the public domain if you don’t give me your undivided support.  If I fall you will fall too, so you’d better stand by me.'  And all the office bearers and friends did exactly that.

And Jesus said, 'So I tell you, take full advantage of the power given into your hands so that you may be able to stand against the accusations of your enemies.  For it is better that you wield power, even with dishonesty, than others take that
power from you.'

Would such a parable really be a parable of God’s kingdom?  A story that seems to commend corruption, lying, undue influence, and sordid sex?  Wouldn’t it be outrageous to use such things as a way of teaching the right behaviour of God’s people?  Scandalous even?

Those are just the feelings that the parable we heard from Luke 16 should have brought us.  Surely this is easily the most outrageous parable Jesus ever told.

Was there a good moral to the story?  'Make friends for yourselves by means of dishonest wealth so that when it
is gone, they may welcome you into the eternal homes' (Luke 16:9). Can't say I’ve ever heard that one as a memory verse or a Sunday School lesson theme.

Is there a character here we should emulate?

How about the rich man? The rich man doesn't even give the employee a chance to defend himself. The alleged accusation was automatically presumed true, and the rich man ploughs on with his judgement.

What kind of person is this rich man that he so quickly passes judgement on someone who had obviously worked hard to be placed in such a position of trust? And then, when an accusation comes out of the blue -- sorry, no questions allowed -- it's out of the door with you.

This is the same rich man who would later commend the accused 'dishonest' manager for his shrewdness. The manager had just cost him a significant loss on his loans, and yet he commends him. What strange behaviour.  Certainly not a sterling example of righteousness.

What about the so-called dishonest manager?

If he was not guilty of being dishonest before, he went ahead to live up (or is that down?) to his accusation.  He goes one by one to the people who owed the rich man some goods. He offers them deals to take between 20% or 50% off on their bills. And, as if incriminating himself was not bad enough, he encourages the debtors to be accomplices by writing their own invoices!

So, where are the goodies in this parable? We seem to hear only of baddies.

The alleged dishonest manager was certainly not someone we would consider a model citizen, but there was still something he was 'good' at -- being shrewd. The manager took this 'gift,' if you want to call it that, and made it work for him so that his future was more secure. Management they say is the art of using what you have to get what you want. And this is exactly what the clever manager in the parable did. He used every power and opportunity at his disposal as a manager to secure for himself a bright future. As a manager he was shrewd, he had foresight, and he was pragmatic. The gospel challenges us to  bring into the conduct of our spiritual lives the same foresight and realism that this manager brought into the conduct of his business life.

The rich man was not what I would consider to be a fair person, but there was something he was 'good' at -- getting rich. The rich man caught the manager red-handed after the manager made his shrewd deals and, if he  was to be a fair man, he should have had the miserable ex-employee thrown into prison. Yet his gift of being rich allowed him to make some allowances for the behaviour of his former manager -- so what's a little money when someone is trying to better themselves by doing what they're good at?

Neither are the debtors people to be lifted up as having impeccable morals. One wonders if, even after their bills were slashed, they would ever pay back their debts.

No doubt, these are not nice people that Jesus told the story about. Especially compared to those among us who have never cheated on our taxes, or driven over the speed limit, or unthinkingly run up a huge debt, or ever lied about anything, or ever stared at someone lustfully, or intentionally said something unpleasant to somebody or ... ... Well, maybe we had better forget about calculating who among us is a nice person. None of us qualify as being good enough.

Yet, despite not being good enough ourselves, why is it we spend so much time judging other people as having no redemptive value?  If we make worth a criteria of redemption, who then would be saved? I like what Mother Teresa once said, 'If you judge people, you have no time to love them.'

Even the unfair rich man could see something 'good' in his dishonest manager. How much more so should those who call themselves faithful look for the good in other people. Looking for the good in people is impossible if we treat them as having no redemptive value.

Who are the ones we treat as though they have no redemptive value? Is it the ones who have a lifestyle which we do not agree with, and we dismiss them as having nothing worth contributing? Is it the ones who do not think like we do, or believe like we do, or who associate with others with whom we feel uncomfortable? Is it ones we consider too young, or too unattractive, or too impaired to add anything to our life or the life of the church?

The real shock of this story is that the dishonest manager is nothing less than the Christ-figure in this parable; as the priest-scholar, Robert Capon, puts it, he is 'a dead ringer for Jesus himself. First of all, he dies and rises, like Jesus. Second, by his death and resurrection, he raises others, like Jesus. But third and most important of all, the unjust steward is the Christ-figure because he is a rogue, a reprobate like Jesus. The unique contribution of this parable to our understanding of Jesus is its insistence that grace cannot come to the world through respectability. Respectability regards only life, success, winning; it will have no truck with the grace that works by death and losing - which is the only kind of grace there is.'

This parable, therefore, says in story form what Jesus himself said by his life. He was not respectable, in the usual understanding of the term. He broke the Sabbath. He consorted with villains and outcasts. And he died as a criminal. Now at last, in the light of this parable, we see why he refused to be respectable: he did it to catch a world that respectability could only terrify and condemn. He became sin for us sinners, weak for us weaklings, lost for us losers, and dead for us dead. St. Augustine said, 'The cross is the devil's mousetrap,' baited with Jesus' disreputable death. And it is a mousetrap for us, too. Jesus baits us criminals with his own criminality: as the shabby debtors in the parable were willing to deal only with the crooked manager, so we find ourselves drawn by the bait of a Jesus who winks at iniquity and makes friends of sinners - of us crooks, that is - and of all the losers who would never in a million years go near a God who knew what was expected of himself and insisted on what he expected of others.

You don't like that? You think it lowers standards and threatens good order? Of course it does! And if you will cast your mind back, you will recall that is exactly why the forces of righteousness got rid of Jesus.

This scandalous story says a powerful thing about God - God is not the omnipresent all seeing headmaster waiting to dish out '10 of the best' to anyone who is caught stepping out of line. There are so many things that we think occupy God's concern - things like correct doctrine, the survival of the Church, moral purity; and all the rest. The only thing that God
is actually interested in is how we get on with others, and if we can help others live lives free of the burden of debt or sin.

He summoned the master's debtors, one by one: he 'asked the first, 'How much do you owe my master?' He answered, 'A hundred jugs of olive oil.' He said to him, 'Take your bill, sit down quickly, and make it fifty.' Then he asked another, 'And how much do you owe?' He replied, 'A hundred containers of wheat.' He said to him, 'Take your bill and make it eighty.'" (Luke 16:5-7). This is, of course, what has happened to us, and to all, on the Cross. Jesus on the Cross says to us: How much do you owe God? Sit down and write: None!

That seems to me to be good news!

This script is based on the interpretation given in 'The Parables of Grace' by Robert Farrar Capon (Eerdmans, 1988) - that book's
inspiration is gratefully acknowledged. Many thanks to the preaching colleague who pointed me to this source and responded to this request:
The original sources of the ideas presented here have been lost. Information to correct this oversight and that would enable proper acknowledgement to be made would be appreciated to 'theosoc' inserting the usual sign 'msn.com'