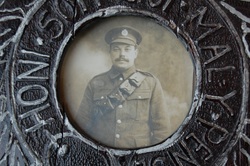 Sapper A.E. Price
The bombs and  the shells rained down. Where they didn’t actually hit the lines, they blew away embankments or collapsed oceans of mud from pulverized cuttings on top of the tracks.  Albert Edward and his colleagues dug the tracks out, and re-laid them level, time after time after.  Albert Edward was my granddad, and he was a railway sapper in the First World War. For him and his mates, keeping the tracks level was his constant task, that’s what sappers were about.

If you look up this strange word “sapper” you’ll find it says “one who builds saps.”   What’s a sap?  “A tunnel or trench to conceal assailants approach to a fortified place; a covered seige-trench,” partly from the French for spadework.  But then there is an interesting aside in brackets - probably from Arabic origin.  I’d want to go further than that, I think this little word “sapper” links us right into the ancient near East of the scriptures.  So we heard from Baruch, probably the last book of the Jewish scriptures to be
written, God has ordered that every high mountain and the everlasting hills be made low and the valleys filled up, to make level ground, so that Israel may walk safely in the glory of God.

Writing from one of the dispersed Jewish communities, living far from their homeland, longing to return home, he says that God will send the sappers in to make the path level and sound for his people to come home.

That’s our key theme for today: Those forgiven shall walk safely on level ground in the glory of God.

The words which we just heard in today's gospel from the prophet Isaiah have come to be identified with John the Baptist and his role as sapper in history: "The voice of one crying in the wilderness: Prepare the way of the Lord, make straight his
paths. Every valley shall be filled, and every mountain and hill shall be brought low, and the crooked shall be made straight, and the rough ways shall be made smooth." I’m sure when Isaiah wrote these words, he had had experience of
the actual engineer soldiers called "sappers" in his own day, who would go ahead of a traveling king to smooth out the road for the monarch's chariot. Sappers leveled hills, filled in ditches and removed all obstacles in the king's way.

Even today, much the same thing happens. When the royal train is due the station is made to blossom, and you could eat your breakfast from the platform. The visit of a monarch or a head of state ensures that a city is spruced up and
looks its best. Roads are repaired, buildings are painted, and beggars are removed from the streets.

So Isaiah knew what he was talking about when he wrote those words, and Baruch the lonely exile takes up the theme, which Christians came to associated with John the Baptist and his mission. So who is John and where did he come from? Well, we're all familiar with the circumstances surrounding his birth from the first chapter of Luke's gospel. However, Luke makes no further reference to him until today's gospel passage. Although Luke does not give as many details about John's
lifestyle as do some of the other evangelists, Luke does make enough observations to suggest that the Baptist had ties with the ascetical community that lived at Qumran.

This is suggested by the fact that the locality designated "around the Jordan" is where this community was situated. In addition, John and his message are introduced with the words from Isaiah which we heard in the gospel, a text which was very important to the Qumran community. The water ritual "baptism of repentance" mirrored aspects of the Qumran community's own ablution rites. And finally John's apparent conviction that God's judgment upon Israel was imminent - except for those who would repent - all suggest that the Baptist and Qumran had some connections.  The sap that had to be built according to this community was one of holy living.

But it is also  clear at this point that John is on his own, undertaking his own ministry with its own unique agenda. John has received a special call, which Luke reinforces by using the traditional prophetic "call" formula: "the word of God came to
John, the son of Zechariah". What John is called to proclaim is a message of repentance. Both Luke and Mark identify John's rite as a baptism of "repentance" (from the Greek word metanoia, meaning a "change of mind"). This purposeful  "turning away from sin" will result in the life-transforming experience of "the  forgiveness of sins". This proclamation is undoubtedly what leads Luke to specifically identify John's message as the beginning of the "good news" which
God intends to give to his people, Israel.  We’re back at our key theme:

Those forgiven shall walk safely on level ground in the glory of God.

So what does this "repentance" or metanoia that brings forgiveness entail?

An incident from from the Lebanon hostages crisis of the 1980s* dramatically illustrates the meaning of "repentance". Perhaps the best-known of the hostages to us is Terry Waite, but do you remember the name of the hostage whose plight had actually taken Waite to Lebanon?  It was Terry Anderson, an Associated Press journalist. He was kidnapped in 1985 and
imprisoned for 2,454 days, or almost seven years. At first, he was blindfolded most of the time and kept in chains. He was losing his capacity to think, so he asked for a Bible. He was provided one and began to read. Although he had been
raised as a Catholic, he had not been practicing his faith for many years. That Bible was like a gift from heaven. He started at the beginning with the book of Genesis and just read and read. He had lots of time to think about his life. He realized that he had made many mistakes because of his arrogance. He had hurt his first wife and daughter. He wasn't sure that people liked him and he certainly didn't like himself very much.

Later, in the first year of his captivity, he became aware that other hostages were living next door. One was a priest, Father Lawrence 'Marty' Jenco. Anderson asked the guards if he could see the priest. "I am a Catholic and want to make a confession," he said. His captors agreed and allowed Fr. Jenco to come to his room. Both men took off their blindfolds. It had been 25 years since he had made a confession. Fr. Jenco gently encouraged him.

Anderson began telling the priest of his sins. There was much to confess: a bad marriage, chasing other women, drinking. It was a tremendously emotional experience. When he had finished, both men were in tears. Fr. Jenco then laid his right hand upon Anderson's head and proclaimed, "In the name of a gentle, loving God, your sins are forgiven you." This was a turning point in Terry Anderson's life. His faith deepened. He had begun the process of turning around, leaving the darkness of sin and facing the light. This is what repentance is like. Terry Anderson experienced a metanoia in his life and was never the same again. The path for him was leveled - although it was still to be a long time before he was freed
from captivity.

John came preaching a baptism of repentance. And just like the ancient "sappers" removed obstacles in the pathway of the king, we are called to get rid of all obstacles in our lives which hinder us from welcoming the Lord Jesus into our hearts.
John's message was "The king is coming. Mend, not your roads, but your lives." Thus, the duty is laid on everyone of us during this Advent season to make our lives fit for a King. We are sappers to each other - let’s build a level path that we can walk home together.

*with acknowledgement to the website Deacon Sil's Homiletic Resource Center, from where the account of Terry Anderson and Fr Lawrence 'Marty' Jenco  was originally drawn.