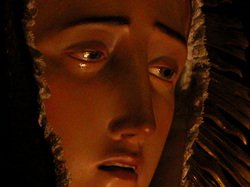 Do you know the story by the famous American short-story writer O. Henry that’s called ‘The Gift of the Magi?’ If you’re not familiar with the title, I’d be surprised if you hadn’t heard the narrative in one form or another because it’s one of those tales that’s been retold in countless ways. In the original it concerns a young couple called Della and Jim. These two are described as extremely poor but very much in love. Their poverty meant they owned practically nothing except  that each had a unique possession. For Della that was her hair, which was her glory. We’re told that when she let it down it almost served as a robe. Jim’s
one possession was his gold watch which had been handed on to him by his father, and in which he took great pride. It was the day before Christmas, and Della had just one dollar and eighty-seven cents to buy Jim a present. She went out and sold her hair for twenty dollars; and with the money she bought an ornate watch
chain for Jim’s precious pocket watch. When Jim came home that night and saw Della’s cropped locks, he stopped, as if stupefied. It wasn’t that he didn’t like how she appeared or that he loved her less; in his eyes she was as lovely as ever. No, there was something else. Slowly he handed her his Christmas gift; it was a set of expensive tortoise-shell combs with jewelled edges for her hair – and he had sold his pocket watch to buy them.

Sentimental? Well, maybe. But love is like that, I think. We recognize what O. Henry was writing about. That’s the reason, surely, for the many repetitions and adaptations of the story. Love is extravagant. We all think it so, and wish it so. Our ideals tell us love is always giving, even of that which is most precious to us, if it will in some way honour the one we love.
Love’s like that. It has tangibility about it. In fact more than that it has a ‘smell’about it – it fills the atmosphere around it.

As Saint John says of the costly perfume with which Jesus was anointed, ‘The house was filled with the fragrance of the perfume.’ The very atmosphere of the house was changed by this act of love. This is one of those rare incidents from Jesus’ life that all four Gospel writers use, but the detail varies between them. Mark and Matthew describe Jesus’ head being anointed by a woman who goes unnamed. This happens in Bethany in the house of Simon the leper during that last week in Jerusalem. Luke, however, describes Jesus’ feet being anointed, again by an unnamed woman, but this time in the house of Simon the Pharisee during Jesus’ time in Galilee. John also says the ointment was poured on Jesus’feet, but he alone names the woman as Mary, who was one of the sisters of Lazarus, and says it was at Bethany before Jesus made his fateful entry into Jerusalem.

It is simply not possible to tease out which of these accounts is the one nearest to the actualities of the happening. Instead we need to recognize in its repetition that all the Gospel authors thought it a really important incident. So the question we need to ask of John’s account is: what does he, in the way he tells it, want us to know about being a disciple of Jesus?

Foot-washing was common enough – among the wealthy anyway. The streets of the day were little more than open sewers and reclining to eat meant that someone else’s feet were rather too close to your face. Foot-washing was essential to an odour-less meal. It isn’t the foot-washing in itself that’s strange, but how it was done.

This isn’t something that a host would do. This was the work of a slave or servant. Why oh why does Mary, the sister of Lazarus do this? This is something far below her dignity; far below her reputation. And that was made all the more shaming by the fact that she let her hair down in doing it. Israelite women just didn’t do that. A woman’s hair was never unbound in public; indeed a truly modest and religiously fervent woman would have been reluctant to allow her hair to be seen loose even in her own home. Mary does something extraordinarily shaming. And she uses expensive ointment when plain water was the order of the day. Mary does a thing that is humbling and shaming and extravagant all in one; such an extraordinary action that it can only have been prompted by the most profound love and loyalty. It is not the stench of walking filthy streets that fills the room, but the perfume of love shared and a loyalty that knows no boundaries. This is an action that has a Della and Jim quality about it.

The clue is in where Mary pours the oil. Everyone knew what anointing was about. It was a thing done to a king, a priest or a prophet to mark that person out as having a special, elevated role. It was something done to the head – hence the psalm of King David ‘You anoint my head with oil; my cup overflows’ (Psalm 23.5). But that’s not done here. Another familiar anointing was that of the body of a dead person: here’s an action that marks the change  from a living member of the family to someone honoured amongst the ranks of ancestors. But that’s not done here either.

No, Mary anoints Jesus’ feet. Jesus will walk to his destiny in Jerusalem. It is his feet that will carry him before his accusers. It is his feet that will drag his weary flesh and the weight of the cross through the streets. It is his feet that will be nailed so that he can walk no further. It is his feet that signify the purposeful action of his self-giving. This is about
what Jesus is doing –and what he will do in Jerusalem. And Mary’s pouring of the oil signifies her acknowledgement of that. ‘These feet, as blooded and bruised as they will be, shall achieve my Lord’s glory. This I acknowledge. This I enter
into. You think me shameful, wanton, unworthy of my rank in what I do. So will you say of my Lord. Foolish and accused you will call him – and now you may call  me that because of what I do with this perfume and my hair. But know this, from
such folly new life will come. Just you wait and see.’

Mary humbles herself – taking the form of a slave. Mary puts herself in a place where she will be ridiculed. Mary exposes herself. Mary makes herself the victim of taunts. Mary displays a love that is unbounded. Mary prefigures in this lesser domestic scene the awesome things Jesus will undergo in the public arena. Yes, it is Mary who understands; Mary who follows the steps  of her Lord; Mary who risks herself in loyalty that goes beyond the threats of death; Mary who is the first apostle of resurrection love; Mary who fills the house with the fragrance of love – in face of the incredulity and mocking of
those who just look on.

Love, real love, has a smell about it. It is volatile in the sense that its molecules fill the air, like a scent does. Mary’s action fills the room with the scent of love. She has an awareness of what’s going on around them that escapes all the others. Peter will later refuse to let Jesus wash his feet; he just doesn’t get what is happening and refuses, at least at first, to be associated with all these things about feet – action, and humility, and  service, and movement. These things may be open to ridicule, these things may be  easily misunderstood, these things will provoke, these things will be risky, and  these things may be deathly. Yet Mary reaches out to Christ and demonstrates her understanding, her compassion and her willingness to be involved – the scent of love. There is lavishness to her devotion that anticipates the honour that will
be accorded to the risen and glorified Lord. Mary is already there – in imagination at least beyond the suffering and death into eternal verities.

You see there is an anointing of a head in this story – that anointing that signifies elevation to a special office. The effect of Mary  wiping the excess ointment from Jesus’ feet with her hair is that her own head is anointed through the body of Jesus. Mary is anointed and in that anointing the whole house is filled with fragrance. Just a little earlier in John’s Gospel
there has been a worry about smell. When Jesus asked that the tomb of dead Lazarus be opened, Martha, Mary’ sister, had been fearful of the stink of death that would result. Now Mary releases into the atmosphere the smell of life. This
is what the anointed disciple is about – spreading the smell of love through the world. Mary is the fore-runner, the prototype, of what Jesus’ followers must be – those who bring the scent of life with them wherever they go.

And that brings us to Judas – if Mary recognizes what the others are too dull to see – then Judas stands for the ones who in hot temper don’t have the patience to wait for what might be. He is the man of instant solutions – if this much ointment could be wasted, there must be more and the sale of it will make an instant impact. Think of how much poverty we could relieve; of how much influence we could achieve. He is the keeper of the purse and he thinks always in money terms – that’s what counts in the end. This is the stench of calculation and dead-ends. But Mary’s action says something different – says that beyond these interminable problems, beyond the commonplaces of human hurt and suffering there is a better way and that can only come to light through what Jesus must endure. Is it fanciful to suggest that a significant part of Judas’ anger is down to the fact that the purse keeping seems to have passed from him to the woman? The coins he holds for them are as nothing in comparison to the power of Jesus’ death: ‘Leave her alone, the wealth of ointment she holds is for the anointing of my dead body.’

Mary does the lavish thing; the thing that so many will misunderstand and even raise their voices against her in condemnation. ‘A brazen act that is shaming,’ they will say. But the Jesus people know different. Here  is Mary the one who anoints and is anointed; the true disciple of the ever loving Lord; the one who dares to act out her recognition. She is ahead of the pack – the others fail to see it, but she knows and she lives it. She lets the scent of life invade the gloom of fear – the dark clouds are forming, terrible things are going to happen, but the scent of love will not be quenched.

‘Mary took a pound of costly perfume made of pure nard, anointed Jesus’ feet, and wiped them with her hair.’ This is pure devotion. This is extravagant love –not to rouse our jealousy, nor to make us indifferent to hurting, nor to set us apart from the common needs of human yearnings – no, this is simply a recognition of love’s power. Here is something to delight in; something to make us wonder; something to think hard and long on when life’s hurts trouble us. This is a Della and Jim moment that gives a glimpse of life’s profundities and life’s hope.

Take a deep breath, catch the fragrance of extravagant love – it travels, it fills the air, if only you will let it.