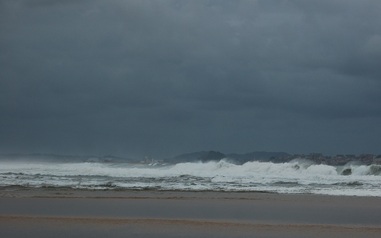 What story do you hear in this tale of fierce winds and smashing waves? The sudden storm rolls down the lake and the thrashing waves and the angry wind threatens to engulf the boat and
cast its scarred occupants into the terrifying water. What a time to be asleep! How can he snooze through all this commotion and panic? With every cresting wave and crashing drop their fears are stoked. ‘Water is going to engulf us.’

What do hear? Fear, panic, and dread. The terrors of the child who knows deep inside
herself how scary scared can be. The loud tick of the clock becomes the footsteps of a monster coming to get you. There’s so much to terrify you when you’re small. Even now – too many years later to admit easily – I remember so clearly those night-terrors. ‘Grandma, tell me a story to make me feel safe as I fall asleep.’ Tell me a story that reassures, that cures, that overturns what’s
scary. Tell me the story of a storm suddenly stopped. Of someone I can trust to calm my fears. That surely is the first thing to hear in this watery tale.

Strange then that in the way the Church of England used to order the Bible readings for the Eucharist this story was missed out. Versions of it appears in Matthew and Mark, as well as Luke, but the readings I preached through for almost twenty
years missed it out in the principal Sunday service. It’s as if it was being dismissed as a primitive story we can do without in our modern understanding of the world. Whereas its’very ‘primitiveness’ is exactly what connects – this story gets us in touch with the fears that lurk in the heart of every human soul; those fears may have primeval sources but we never grow out of them. Hear first then a reassuring word that Our Lord handles those fears.

Then ask yourself again, ‘What story do I hear?’ Perhaps you hear the story of Jonah? It’s another watery tale after
all; Jonah was a prophet like Jesus who was called by God to go to the unbelievers? But unlike Jesus, Jonah went in exactly opposite direction. A storm came up, and Jonah too slept despite it. In terror the sailors shook him, ‘How can you sleep? Get up and call on your God to save us.’ Only when they had eventually thrown Jonah overboard was the storm stilled. You know the rest, the great fish that swallowed him, his eventual preaching amongst the unbelievers of Nineveh – well preaching? Tirade really! Jesus could have done the same, but he didn’t. He gives form to a God who gracious, merciful, long-suffering and of great kindness. ‘Be still; and know what peace with the world, with others, with yourself, with God, really is.’ Jesus gives form to the Gracious God – gives human form.

This is a point Ben Quash makes in his book ‘Abiding’ published for this Lent. Luke says that as they were sailing Jesus feel asleep. This is a very creaturely thing to do – as I know every afternoon around four o’clock! If I’m not doing something active then the urge to fall asleep is overwhelming. That’s what creatures do. As we heard in our first reading, God caused the man to fall into a deep sleep. You and I are one with Adam and with Jonah – we sleep, but God does not. Remember what the Psalmist (121.4) says, ‘He who keeps Israel (that’s God) will neither slumber not sleep.’

What story do you hear? A story that tells something of what God taking our human nature actually involves. Jonah’s sleeping is the slumber of avoidance: ‘perhaps if I keep my head down the sailor’s won’t notice and God won’t notice either.’ It’s a calculated tactic, an action to avoid what he’s supposed to be about – like his ranting later. The sleep of Jesus, however, isn’t that at all. Rather it’s the sleep of innocence; like the trusting child who isn’t prey to nightmares or an adult’s profound anxiety. Sleep like that of Adam in the garden paradise of Eden. Jesus asleep isn’t uncaring of those around him whose tiny shell of safety is being engulfed; no, his sleep is the trustful, innocent sleep of confidence.
Jesus recovers for us the sleep of Adam.

This is how Ben Quash puts it,
‘The  words on millions of lips and passing through millions of minds are the words of the disciples – the words of lost innocence – ‘we are perishing!’ Today’s, world barely sleeps. If it lets its vigilance slip for a moment, it fears disaster.
Never has there been a world so obsessed with surveillance. ... ... Never have we had so much technical ability and power of control. Like the disciples with their boats, we are competent. But never have we realized our own fragility so much; never have we had such a sense of lost innocence before; never have we slept so badly.’ (Abiding, page 208)
And he concludes,
‘... Jesus did not sleep because of naivety, however much (superficially) that might be the case. His sleep is not an expression of casualness; it is an expression of peace.’(Abiding, page 209)

And later, of course, in the Garden of Gethsemane, it will be Jesus who is awake while the disciples sleep in anguished avoidance. But now the promise is the restoration of trusting sleep – his life, death and resurrection will restore that to us. The sea of fear is replaced by a beauty beyond compare – whatever else Revelation chapter four is about, it is about that: delight in the beauty and sound of a sea like crystal. You are part of unimaginable beauty, have no fear. Is that the story you hear?

What story do you hear? That’s the question. Any maybe you hear the fears of a tiny Christian community like a little boat adrift on the wide seas of imperial power? After all, hasn’t the church often been thought of as a boat struggling in an all too frequently heavy sea? We hear ourselves so described so often. Luke’s church was a tiny community afloat in a world of threat, persecution and violence. Indifference seemed almost a positive in comparison to the cross’ shadow and the lions roar. Do you hear their story, as they cry out from a puny coracle of faith in an ocean of turmoil?  In their desperation they remembered the old songs of Israel, the verses of the Psalmist:
Rouse yourself! Why do you sleep, O Lord? Awake;
do not cast us off forever! Why do you hide your face?
Why do you forget our affliction?  (Psalm 44)

Yes, they shouted that fear. But they also began to know for themselves another song. Then they cried to the Lord in their
trouble, and he brought them out of their distress; he made the storm be still, and the waves of the sea were hushed. (Psalm 107) It began almost in incredulity and perplexity: ‘Who then is this, that he commands even the winds  and the water, and they obey him?’ But that troubling thought will turn into a new and unshakeable confidence. The perils were and are real enough, but with Jesus they (and us) will find safety, and abiding security no matter what  comes.

What story do you hear?

The story of some men – fisher-folk mostly, who thought it was exciting, and adventurous, and exhilarating when they were called to fish for people in the footsteps of this wonderful, wondrous character Jesus. But then to their alarm
they discover that people fishing is even riskier than fish fishing! They are soon in trouble and Jesus has gone to sleep – all too literally, he sleeps the sleep of the dead, he is crucified.  ‘Arise, arise Lord,’ is their fervent prayer. ‘Arise, don’t you care that we are perishing?’ And he rebukes the wind and says to the sea, “Silence, be still,” the very words he had used to calm the raging demons in the synagogue in Capernaum. The wind and the sea, like the demons, obey.

What story do you hearin this tale of fierce winds and smashing waves? One of these; or another?  Or do you hear the story addressed to you? I feel sure that’s what the Gospel writers meant by their telling of it.  Who could this Jesus be? For
Jesus it is fear not unbelief that is the opposite of faith. If you know who he  is you’ll know that for yourself. Why be so afraid when it’s stormy? With God aren’t we in good hands? These are the hands that mysterious wove in our mother’s womb, the hands that hold us up every single minute of every single day, the hands that will one day lead us to the other shore, the haven or our longings, the harbour of our deepest desires.

What story do you hear?