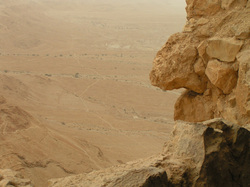 Marco Lavoie hit the headlines the world-over  last month when he was
rescued after being stranded for three months in the remote Quebec
wilderness. What made the headlines wasn’t the fact that he had
survived in the wilderness alone and supply-less, but that to stay alive he had had to  eat his pet dog.

An experienced wilderness trekker, Lavoie  lost his supplies and only transport in an attack by a bear. To make matters  worse it was his trusted German shepherd dog that scared away the wild bear. Without the dog’s intervention the bear might well have turned its attention to the trekker.

Experts believe that if he hadn’t eaten the  dog he would have died of starvation in the densely wooded wilderness. As it was he had lost 90 pounds in body weight, was suffering from dehydration and hypothermia and was only a day or two from death when he was  rescued.

Quite a wilderness story! Remarkable, but it’s also peculiarly familiar; these stories of people surviving against the
odds in the wildest of places are repeated again and again in the media. They remind us that we shouldn’t think of ‘wilderness’ in terms of the glossy TV shows produced by National Geographic or David Attenborough. There we see from
the comfort of our sofa a resplendent view of wilderness – but it is only a glimpse of something awesomely ‘other’ from the relatively settled and secure life most of us live. Wilderness is way beyond the experience of most of us –  even if we’ve spent some time ‘outward bound.’

So when we hear of John the Baptist in the wilderness– see in your imagination the struggles for life itself of a Marco Lavoie, not the fiery but all too easy hustling of a street corner preacher. John is a wilderness man, speaking out of
the wilderness – both literally and  metaphorically.

He is out in the wilderness – far from the places of power and the palaces of those  who softly accommodate the yoke of the oppressive regime. This is a man who lives on the edge. He is someone who sees the world through the lens of
wilderness experience and he calls to mind the fact that God’s people endured the wilderness – with all its confusions, ill-will and foolishness – as they fled from the tyranny of Pharaoh. For years they struggled with the God’s call on their lives; so often abusing it with their own waywardness and sin. This is a man who won’t stop reminding people of the reality of faithlessness in spite of all that comes from God’s gracious leading. He is someone who risks the traumas the wilderness may bring. This is the place where death is all too close – the wilderness where food is scarce  and starvation an ever presentpossibility; the place where the wild beasts are a constant threat because they’re hungry too; the place where demons reside. This is a man who confronts even death. On the edge – testing them, reminding them, urging them, and
confronting them.

John is scary. John speaks from the place of death. John is fierce in his call for things to be different. John is a cry
for change– the ruling elites of the city shall not have their way; the casual acceptance of a living that is no living at all, shall not last; judgement and disaster is all that such easy accommodation of wrongness brings. ‘Wake up,’ screams John,‘don’t you realize how late the time is?’ Destruction is destined unless we can shake ourselves out of this stifling corruption of what life is meant to be.‘Return to what God asks of you for the reign of God is nearer than you think.’

And you might expect that such a message will get lost in the wilderness. Who is to hear? But that’s the strange and disarming thing. Far from it being lost, the very fact that it comes from the wilderness makes people pay attention. This man who scratches about in the earth to find sweetness, who crunches on locusts, and faces the danger of hypothermia every night, by his very strangeness reminds people of their complicity in what’s wrong. In his strange behaviour and his stern message they hear again the voice of the prophets of old – ‘mend your ways.’

Yes, John is a throwback to another age, his voice uncomfortably at odds with an everyday, settled world. But those are the very things that make him heard above the clamour of what’s taken to be normal. And the people flock to him: ‘the people of Jerusalem and all Judea were going out to him.’

Listen to the voice that doesn’t just repeat the commonplace. Listen to what comes as strange and disconcerting. Listen to the cry that somehow stirs within you a deep remembrance of things past. Look for the prophet now – the wilderness voice
heard despite our complacency. The voice we aren’t expecting.

On December 1st, 1955 Rosa Parks was on her way home from work on the bus in Montgomery, Alabama. As the bus filled she refused to obey the order of the bus driver that she should give up her seat in the section for coloureds to a white passenger, because the designated white sitting was full. She was arrested for her defiant refusal. She wasn’t the first person to resist segregation in buses, but somehow her action became the trigger for others to act and so began the Montgomery Bus Boycott. All unexpected, Parks put herself in a moment in the wilderness – the police  mug-shot shows a plainly and modestly dressed petite woman with spectacles and neatly parted hair. Hardly the scary prophet of the wilderness yet she became a living symbol of the burgeoning Civil Rights Movement in the USA, and internationally recognised for her resistance to racial segregation. She put herself at odds with the commonplace of her day.

Looking back, she wrote years later: ‘People always say that I didn’t give up my seat because I was tired but that wasn’t true. I was not tired physically ... I was not old ... I was 42. No, the only tired I was, was tired of giving in.’ She voiced in her simple action something disconcerting and challenging; something that reminded people of possibilities  for the better, even amongst all the hostility and hate.

After her death in 2005, the eulogy for Mrs Parks was given by Oprah Winfrey, and in her concluding remarks she said: ‘And in that moment when you resolved to stay in that seat, you reclaimed your humanity and you gave us all back a piece of our own. I thank you for that. I thank you for acting without concern. I often thought about what that took, knowing the
climate of the times and what could have happened to you, what it took to stay seated. You acted without concern for yourself and made life better for us all. We shall not be moved. I marvel at your will. I celebrate your strength to this
day. And I am forever grateful, Sister Rosa, for your courage, your conviction.’

‘Reclaimed your humanity and gave us all back a piece of our own.’ I can’t pretend to be  able to fully fathom the depth of
the feelings Winfrey expresses. Mine a very different life experience. Yet I will dare to claim that Mrs Parks’ defiance was a prophetic act in the tradition of John the Baptizer. And I will dare to claim that every such act calls you, and me, to reclaim our common humanity and acknowledge the simple wrongness of so much that we take to be commonplace. Sometimes we need to be reminded of the wilderness, the risky, hostile, disconcerting place that we avoid. We need to
face up to what’s wrong and defy it. The voice from the wilderness reminds us of the repentance due if we are to meet Christ face to face.