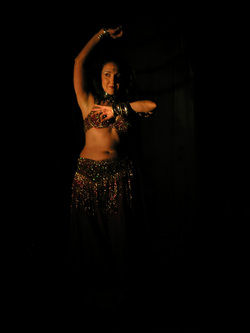 The bishop was very impressed. What a way to get people listening.  He decided he’d have to use that one himself, at his very next sermon.
In the cathedral he began his sermon:  “The happiest days of my life have been  spent in the arms of another man’s wife.”  Again there was an immediate bolt of shock through the congregation.  The old bishop paused and then stuttered, in confusion, “But I can’t remember who.”

The bishop’s unease finds an echo in me today.  In a sense I’m afraid of forgetting the punch line in a tale that similarly relies on thoughts of sexual intrigue.  Poor John the Baptist, beheaded during a banquet for those in public office. Herod’s birthday party is for his officers of government and the military, and for prominent people in the commercial life of the  community.

Poor John the Baptist. John was a kind of throw-back. The age of the great prophetic figures of Judaism was long past, but John had revived it.  He lived out in the bush, a wild loner, but people flocked to him because of what he said:  “Live up to the standards of a God who is good and righteous, turn your back on the wrong.  Start afresh, be baptised as a mark of
that new beginning.”  And hoards were – crowds of people were baptised into a life of righteousness.

Pretty bad news this – for those used to scheming, and wheeler-dealing, and manipulating power to their own ends.
Too much talk of justice and new beginnings can too easily become action to make those new beginnings happen.
A pompous puppet-king like Herod of Galilee and Perea was hardly likely to welcome John’s call to justice.
This is Herod, called Antipas, son of Herod the Great, the one we are  told murdered the babies at the time of Jesus’ birth. – so this Herod, he had a heritage of brutality on which to draw.

The crunch came when John spoke out about royal domestic arrangements.  Herod junior had  divorced his wife to marry Herodias, the woman whom he had stolen from his half-brother Philip.  This is worst than something out of Hollyoaks or Eastenders.  “Scandal,”shouts the prophet, and that does for him, Herod has him hauled to prison.  We even know where he was locked up – Machaerus near the Dead Sea.

Herodias sees the locking up as her chance to silence John forever.  This should be his end.  But Herod won’t hear of
it.  Bizarrely, Herod likes to sometimes step aside from his world of intrigue, decadence and violence to listen to John.  When no one else was about, he would have John brought to him.  He even listened to him gladly.  The puppet king plays the game of monarch and prophet, king and jester, good and evil.  It’s diverting, even fun.  John is in prison under his control.  What more harm can the prophet do?  But that’s not good enough for sulky Herodias.  She wants an end of
him, as soon as she has the chance.

That sets the scene for what will take place at the banquet.  There are two directions I could go in now.  One you could
call the racy TV script, the other an analytical, literary examination of the story.  I knew it, you want the analytical one, right?

Well here goes.  Who suffers in this story?  John the Baptist of course, but there is a hidden sufferer here as well,
and that is the daughter of Herodias.  The story describes her as a “girl” and pictures, films and dramas  conjure up a particular picture of what she was like.  We hear “girl” as describing a young woman.  But supposing she was described “as a little girl” – the picture would be very different, yet “little girl” is precisely the term used in the original  language of the author.

Imagine a young child who does a cute, innocent little dance that pleased the crowd.  We all know of little ones eagerly dragging parent, grandparent, aunt or neighbour to come and see the show I’ve arranged, the play I’ve made up, the dance that I can do.  With all the eagerness and  delight a young child can bring to a performance. That’s what happened – the child charmed everyone by her gushing, simple enthusiasm.  The gift of a child.

Her understandable showing-off prompts in Herod a similarextravagant display.  Herod offers her a choice far beyond her years – up to half his kingdom, what sense would that make to child?  Quite naturally she goes to her mother for advice.  And what does her mother do?  She gives in to her own sordid desire for exacting revenge on John who had dared to shame her for her infidelity in marriage.  Without a second’s hesitation she involves her little child in this smutty adult scandal.  Who suffers? The child suffers.  The child is made complicit in the murder of a good man. The power of death is made real in the life of a little girl.  Scandal compounds scandal.  The child is corrupted and tainted with the blood of violence and
injustice.  Her own mother scandalises her.  It makes me shiver with shame.

Later in Mark’s gospel story Jesus will say:  “If any of you scandalize one of these little ones who believe in me, it
would be better for you if a great millstone were hung around your neck and you were thrown into the sea.”  But
that is precisely what Herodias did to her own daughter.

Suddenly this story has a very contemporary ring to it.  What happened to Herodias’ daughter is still happening all around us.  Here’s a story that speaks to every person who has any power over others – in other words all of us.

In one way or another we all exercise power – those entrusted with representative office, of course, but also every parent, every colleague, every lover, every worker, every friend.  We all exercise power and influence over others to some degree.  The story reminds us to be watchful in how we use that power. Our scandals must not be our children’s scandals.
Our failures should not corrupt and implicate the innocent.  Yet it happens over and over again.  The way we exercise authority and influence shouldn’t spill over into damaging the vulnerable and those who simply trust us.  Our own agendas must not blind us to the absolute requirement to guard the child, the innocent, the victim, the bystander.

This story warns us that innocence wilfully corrupted has the gravest of consequences – it literally kills, the spirit if not the body as well.

But that is not the way Herod’s murderous banquet is usually seen.  Okay, let’s cut to the racy TV script.

The scene usually runs like this – a room full of those who have drunk and eaten too much. The air full of self-satisfied carousing.  Men eager to show off.  Tradition gives the young woman a name – Salome.  Herodias hasn’t been able to seduce Herod into liquidating the wild holy man, although she has tried often enough.  Perhaps her beautiful daughter, the one all the men drool over, will manage what she has been unable to achieve by herself. “Dance, Salome my daughter, dance. Weave flowers in your hair, sprinkle yourself with the most expensive of perfumes, and put on your sheer silk veils, and dance!  Drink is flowing; the band is playing like a dream, enjoy yourself, have some fun with them; let them stare and be enticed.  Salome, let your veils fall, dance, dance!”

Salome danced, the lure of the powerful and quick thinking older woman behind the scenes.  Swept up by the music and by the cries of the drunken men, Salome danced her bewitching dance, and one by one the veils fell.

Aroused and befuddled Herod cries, “Wonderful, wonderful, you can have anything, anything is yours.” And John’s life is the price of seduction.

Mark tells the story – as grievous and hurtful as it is – with his tongue firmly in his cheek. This is sarcastic social caricature at its most intense.  Corrupt power is what it is about – a good man who told the truth is murdered on the whim of the powerful.  A human life is lost to save the face of a king.  Truth goes for nothing.  An erotic dance got our attention, but don’t be fooled into thinking this is all gender politics.  The women aren’t important enough to what is really going on to be named – as I said Salome is a name given by tradition, it isn’t in the story; and neither is Herodias a genuine name, it is merely the derivative of the King’s name.

No, don’t be fooled, this is a story about the cost and the breadth of righteousness.  It  alerts us to the fact that you can’t separate holiness from wholeness, spirituality from political life, public service from inner motives, social life
from the quest for God.  All these things go together.  I don’t think  God is much interested in religion at all.  He wants us live for the praise of his glory – life is the whole caboodle.  Guard the innocent.  Live the truth.  It is as simple, and as daunting, as that.

A word for those who have power?  Well, yes. A word for everyone of us?  Yes again.  A word of challenge.  That’s true. But also a word of encouragement. Even when we’re up against it and have a good chance of losing our heads, metaphorically, it reassures us that the truthful and responsible struggle isn’t ever wasted.  Roosevelt once said, “Power undirected by high purpose spells calamity,” and I guess that sums it up, whether the high purpose is the public good or simply the well-being of those nearest and dearest.

Do you remember that the story of John’s death is told in flashback?  John is already longdead and buried when Herod receives reports about one Jesus of Nazareth.  Here is another prophet from the wilderness.  The man on the throne
is terrified.  He is still troubled by a guilty conscience.  Could John have risen from the dead?  Well no,  but in that Jesus is also a righteous and holy man the spirit of John is in a sense haunting Herod.  This Jesus will also be led before the powerful, and again blood will flow.  Like John, Jesus’ body will be laid in a tomb.  But unlike John that won’t be the last that is told of him.  The high purpose that is God’s love for all in Christ Jesus lives on.  That’s how to live, now as then.