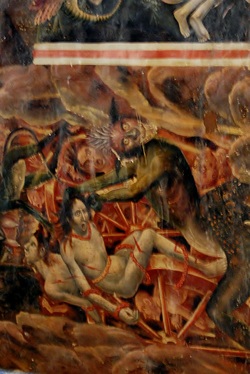 I watched Satan fall from heaven like a flash of lightening.  See, I have given you authority to tread on snakes and scorpions, and over all the power of the enemy; and nothing will hurt you. Lk 10.18-19

She was the prettiest of little girls. A real charmer.  A warm, open smile.  An engaged and interested personality.  Indeed, like so many of her tender years, she was interested in everything. Always asking questions.
Always exploring.  Always wanting to know, to investigate, to look at.  Of course she was her father’s delight.  Really a precious treasure to him.

The couple looking after her that day were much loved friends.
They were visiting the centre as a couple of families together.  To give her mum and dad some space for a while, she was being looked after by the friends.  When the shriek of pain came you could hear it right across the complex.  A stomach curdling yell.  The sort of scream that makes your hair stand up.  The  father knew without doubt that the scream came from his lovely little daughter.  He raced to its source.

The child was distraught, still screaming and in floods of tears.
She had been bitten by a Shetland pony mare with her foal nearby.  Without a moment’s thought the father flared at his friends. Why had they been so lax?  The air was blue.  Indeed it was more than
blue, as the father in burning anger teetered on the brink of violence against his friends.  Now there were five
people smarting with cruel hurt, not just one little girl. And it happened in a flash.

When Jesus said, I watched Satan fall from heaven like a flash of lightening, he is drawing on a familiar Jewish story.
Satan was thought of as being cast out of heaven.  His sudden fall the beginning of his end.  When the seventy disciples returned they were full of joy.  In the power of Jesus they found themselves making a real difference.  Changing lives for the good.  Yes, the demons of hurt and suffering and fear were overcome. But there is threat as well as promise in it.
In terms of the picture language - Satan is there like a flash of lightening.  His fall is the beginning of his end, but in the meantime he can create havoc on earth. In an instant, Satan in blazing ,brilliant power sweeps every defense away.  Suddenly a father’s love turns into terrifying rage.  Proper concern becomes seething anger.  Anxiety
turns into threatened violence.  Like a flash of lightening indeed.

Have you known that father’s outburst? Have you been at its receiving end? Or have you been its source?  Do you
remember times when the very opposite of what you wanted in your rational mind was the consequence of your words or behaviour?  When you yourself have become part of the problem rather than the solution?  When you couldn’t help yourself?  When it all just bubbled up - in fearful anxiety or burning terror?  You might even say of yourself, “I was like one possessed.  What came over me?”

We become what we hate. This is one of the most disconcerting parts of being human. In blind fear at a daughter’s hurt, a father becomes the one to hurt others.  Unaware of what is happening to us, we turn into the very thing we oppose.[i] The process happens over and over again. It happens within us, in our hearts and minds. It happens between us, in our relationships.  It happens in our institutions, between nations and in communities. The examples are so common we hardly see them.  We become what we hate.

The war on drugs makes them forbidden fruit and turns them into a business far more lucrative than other ways to earn a living, and leads to the recruitment of children as sellers, lookouts and distributors.  Gang wars ensue over who has the right to sell.  Mindless crimes are committed to find cash to buy them.  This is not an argument for legalization, but simply a recognition that the more intense the law enforcement, the more potent the illicit drugs.  We become what we
hate.

Little Jamie Bulger [a two-years old child murdered in 1993 near Liverpool, UK by two children aged 10 years] is murdered in circumstances we can hardly comprehend, and his young killers, Robert Thompson and Jon Venables themselves become the targets of a revengeful hate that would itself become the very infanticide it rails against.  We become what we hate.

Aldous Huxley points out somewhere that the campaigns again witchcraft that litter our European history did far more evil than all the witches ever did.  The inquisition drew such attention to witchcraft that it actually spread belief in it and fostered the very thing it was trying to repress.  I leave the many instances of the process in more recent times to you own
imagination.  We become what we hate.

There is a technical terms for what I describe - it’s called mimesis- mimicking the thing you are against, becoming the mirror image of the enemy, adopting the very strategies of the force you oppose. We become what we hate.

Perhaps the examples I’ve used are too remote. Isn’t that same mimesis evident when we secretly catch ourselves feeling
pleased that someone higher upper the social or professional ladder has suddenly fallen from position.  Or, in that
fascination with the road traffic crash that involves strangers.  There is always a crowd to watch someone else’s house burn.  Horror yes, but also a strange joy that it is not our house.  Mimesis, we become what we hate.

Hear St Paul with utter seriousness, for he speaks to our very souls, to the essential components of our very humanity:
Do not be deceived; God is not mocked, for you reap whatever you sow.

The language of Satan and demons in the gospels makes me shudder, but I can’t ignore it. Jesus is referring to what actually happens in the affairs of people.  Yes, he is using the idiom of his own day.  Yes, he is using terms I would prefer not to use, but he is talking about realities that press upon us now as much as they did then, and he is talking about a radical way out. “Whoever fights monsters,” warned Nietzsche, “should see to it that in the process he does not become a monster.” The liberating hope Jesus offers is that we don’t have to become monsters.  We don’t have to become what we
hate.

What is that  something else?  In our Christian shorthand it is simply this, walking the way of the cross.  That journey that takes the hurt, the fear, the deep shadow of evil or pain, and turns towards it, openhanded, loving, accepting, and looks to the  possibility of gracious transformation.  Here Jesus brings to us our true humanity, hurt and evil are de-idolized
for ever, we may live humanely. Death shall not have dominion.

We don’t have to become what we hate. There is an alternative.  This is gospel - good news - our God saves.