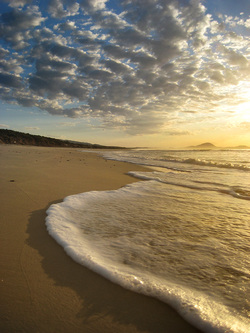 Stephen dies a martyr’s death. It’s not expected. He’s been chosen to concern himself with the relief of poor believers, but he finds himself compelled to tell the truth, and that truth-telling leads to his murder. Suddenly the rocks are raining down on him. Anger, spite, resentment and outrage work that way so often. It’s not that things were planned or expected. It simply happened, like so many brutal outrages reported every week in our media. It’s all too easy to feel that something is profoundly wrong deep in the human heart and soul; something that can too easily well up into murderous action in an instant. Indeed something that at times even appears fearfully beyond our thoughtful control.

In this frame of thinking it’s all too easy to appreciate the power of the list of sins that Saint Paul gives at the end of chapter one of his letter to the Romans – evil, greed, vice, jealousy, murder, fighting, deceit, malice, gossip, insolence, pride, boasting, disobedience, lack of conscience, lack of kindness or pity – living in this way, concludes St Paul, is deserving of death. Harsh words, but realistic also. All these things are the marks of death. No wonder they feel oppressive; no wonder we get bowed-down by the very thought of them; no wonder their power seems so strong. I used to get rather inpatient with people who told me they couldn’t bear to sit through a TV news broadcast, but now I appreciate how they felt. The catalogue of calamity, callousness and calumny is often hard to take. It’s all too easy to be careworn by these terrible things – they do indeed wear a person down.

St Paul knew that the Christian life is no easy option – life can feel like death, worn down by the hurt and difficulty of it all, the shallowness of commitment, the easy compromises we make with evil. It’s what my Gran used to describe as ‘death warmed up!’ St Paul was all too clear about the reality of sin, the reality of evil, the reality of decay – both physically and in relationships – and yet he could assert ‘we do not lose heart.’ Despite all he urges us to have confidence because God has shaped us for life immortal; we have a glorious hope founded on none other than God himself. A glorious hope and the hope of glory! God has a purpose for us. Sometimes it appears that the tide of faith has receded far out in our country. In the churches the talk is often of trouble, dispute and decline. Paul is a realist – he knows the terrifying power of evil and sin – and yet he urges to trust in God, boldly and joyfully. Don't listen to the voices of despair – set your troubled hearts at rest – trust in God, take confidence.

Jesus said, ‘I am the Way, I am the truth: I am Life.’ I first learnt to sing that as a round in a so-called ‘informal education establishment’ in Smith's Rhodesia. Here was a society of gross inequality where white supremacy was the order of the day and most black people were denied opportunities for betterment yet those words range out in joy. I leant from the hopeful voices of several hundred children who were denied access to normal school to make those words ring with life. ‘I am the Way, the truth and the life, that’s what Jesus said.’

What is this Jesus way? We know it is the way of the cross – a way of obedience, a way of suffering and contending with suffering and a way through suffering – what was true for Jesus the Son of God must, be true for his followers. When you are up against it you are treading the way. When the weight of harm seems just too much, you are treading the way. And here's a sign that you are treading in the right direction – don’t give up, let our brothers and sisters in the faith who have trod this path before us be our inspiration. Keep praying, keep trying, if you are pushed down try to believe God will raise you up – maybe the trying to believe will be all that you can manage, but take heart, that will be enough.

Jesus is the Truth – in him God the Father's ways are uniquely known. To be open to Jesus; to be decisive in following his way; to be a home for his Spirit to work is to discover the truth. You would expect me to say that the ways to make that truth your own are the ways of religion – things like regular communion, faithfulness in confession, prayer, using the Bible, and giving of your time and cash and care. And that is certainly the case, when Christians are hard pressed the fulfilling of these things is a crucial part of living the way; but I want to go further too.

Truth is often something we cannot express directly, for example, beauty is a statement of truth but it’s very hard to know how do you describe it?  God is beauty says one hymn; that points us towards all that expresses grace and a quality of loveliness, but it’s a pointer rather than a point in a rational argument! Pointers – a piece of music; a favourite spot in the countryside; the quality of a friendship; the simple prayer of a person in need; sunlight shining through catkins. All these things are God saying to us it’s alright, take heart! – pointers.

I used one of St Paul's lists of sins earlier – such a list chimes all too clearly with what’s wrong in human experience – but perhaps a better place for a striver after faithfulness to start would be St Paul’s list of the fruits of the Spirit in Galatians (5.22-3) – the Spirit produces love, joy, peace, patience, kindness, goodness, faithfulness, humility, and self-control. There is no law against such things as these.

Jesus is the life, all other ways are a counterfeit and sham – we are to live in his way and dwell in his truth, that we may live his risen life. One of the things the resurrection of Christ means is that all the old criteria of judgement no longer apply; the ultimate criterion of death is no more. We are to be a people who measure things by the resurrection life of Jesus. Let there be an end to cynicism and despair. We need each other to keep that resurrection measure bright and usable – knowing each other, sustaining each other, bearing with each other, encouraging other, learning of each other, supporting each other, in joy as well as in trouble. Faith is not self-sustaining in the sense of something you can maintain wholly by yourself. It needs other people – praying it, living it – not least so that I can be certain that when I'm finding it hard to pray it and live it, I can rely on other people's energy to see me through.

Passive observation or simple reliance on the motions won't do. We only learn to show the Spirit of Christ in our daily living as we deliberately set out to do so – witnessing for Christ and compassionate service in his name is only learnt in witnessing and serving. The faith that transforms our lives, that gives us new purpose and joy and peace, comes in the living, the doing. Spiritual insight grows with exercise. We have to constantly strive to recover a resurrection view on living.

Christopher Bryant, a wise and compassionate teacher of prayer, used to tell this beautiful story – it sums up well how we should direct our efforts to live the LIFE:

There was an obscure Jewish rabbi, Isaac son of Jekel, who several hundred years ago lived in great poverty in a single-roomed house in Cracow. One night he had this really vivid dream about a fantastic treasure buried beneath the bridge leading to the royal palace at Prague.  He had the same dream three nights running. Determined to make the long journey on foot to search for the treasure. Bitterly disappointed to find the bridge guarded by soldiers, and the treasure if there, inaccessible.  Stood there looking, dejected.  Captain of the guard pitied him, "What's the trouble?" He told him the dream. Captain laughted, "Don't pay any attention to dreams.  Why only the other night I had a dream about treasure - buried in the house of a man I have never heard of - a rabbi named Isaac son of Jekel who lived in Cracow.  No sensible man pays attention to dreams!" The rabbi listened, astonished - he thanked the guard and set off back to Cracow with haste. At home he began to dig in the corner of him room behind the stove. Eventually he unearthed treasure sufficient to end his poverty for ever.

In the rabbi's long search for meaning and purpose he discovered that the treasure had been with him all the time – he had grown up with it, but he hadn't recognized its value. That's you and me – we take the Church for granted, we take the Christian faith for granted so often – after all it has always been there. But faith can't survive on such meager rations. We have a living hope, a hope that is for the actual living of it – you and Maureen, and Bill, and David, and Mark, and Margaret. All of us. We have been called to a living hope. It's our treasure. Open your eyes, open your hearts – see what God has given you and respond in the same love.

I am the way, the truth and the LIFE; that's what Jesus said.